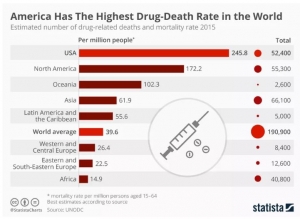 When my realtor handed over the keys to my first home in late September, I didn’t feel like I had realized the American Dream. I even had a car in the lot (well, on the street) and a chicken in the pot. But there was still something missing.

I felt closer to realizing the American Dream while doing drugs with friends in the Escalante National Monument. That national treasure in Utah is being gutted to exploit energy sources by Secretary of the Interior Ryan Zinke and President Donald Trump, but they can’t touch the memories I have of that place or the feelings they invoke.

As we pulled away from a National Park Ranger checkpoint with so much drugs and alcohol the four of us couldn’t finish it all in a week, I watched as unlucky hippies leaned against cop cars on the side of the road with their hands cuffed behind them. It made us all realize how lucky we were. Hell, I wasn’t even supposed to be out of the county without my probation officer’s permission, so staying my ass out of federal prison and going on to have the time of my life made it feel like the new American Dream was to do drugs in beautiful places with lovely people and not get caught. But that’s just part of the new American Dream. The new American Dream is to do all those drugs and then recover from whatever addictions you acquire.

It wasn’t until I quit drinking that I felt I had realized the American Dream. I’ve tried just about everything when it comes to stimulants and depressants, but it was alcohol that brought me the most trouble in my life. Sure I was on probation for possessing a pound or so of pot, but I spent more days in jail during that probation because of alcohol than I did for using cannabis, and I still managed to use cannabis pretty regularly. But I drank daily.

First I decided I’d “slow down” for my body’s sake. You know, drink fewer days during the week. And I did, too. I had just become really intrigued by body chemistry and nutrition, so when I started counting my calories, I got a good look at my problem. I drank less often, sure, but did I ever make up for it on the weekends.

When I found it difficult to meet my caloric goals because of my drinking, I drank faster so I could drink less, or I did more exercise so I could drink more. My weekly cheat day became my opportunity to get super drunk.

When I visited my hometown in Eastern Montana and was assaulted while drunk for saying I was a Socialist, I realized I was incapable of drinking responsibly. I drank for more than 12 hours that day and blacked out en route to a house party. The only thing I remember is saying “I’m a Socialist” and someone immediately suplexing me. Sure, it was a hate crime, but since I couldn’t remember a name, face or much of anything, I wasn’t about to make a big deal of it. I figure those people living with themselves has to be punishment enough.

It took a few more weeks before I actually quit alcohol for good. It was October 3rd, and the Minnesota Twins had lost to the Yankees in the playoffs, again. I drunkenly rode my bike home from O’Donovan’s Pub, where a bartender informed me that Twins’ third baseman Miguel Sano frequented the place, and one time, drank “16 beers” with his arms wrapped around two women while on the disabled list with a stress fracture in his leg. (Just under three months later, Sano was alleged to have committed sexual assault.)

I haven’t had a drink since I heard that story. The next day hurt worse than any hangover I’ve had, including the morning after the Socialist suplexing. I stayed home from work and chased Ibuprofen with soup and water. I had no alcohol in the house because I had finished it all when I got home the night before. Usually I would have handled that hangover with a Bloody Mary or Screwdriver, but I just couldn’t bring myself to leave the house to get alcohol. When I checked my receipts (apparently after I had closed my tab I opened another) and found I had spent $70 -- my average monthly booze budget -- in one night, I knew I was done drinking. I didn’t need an intervention or treatment to stop drinking because I knew if I drank again, I could drink myself to death.

That doesn’t mean alcoholics don’t need help. In fact, 95 percent of alcoholics who need treatment don’t think they need it. Maybe I’m just a member of that majority, and it’ll take a relapse for me to realize it. At least I could get treatment if I wanted it, and my insurance would even cover it. That’s not the case for every addict.

A 2016 report by the U.S. Surgeon General found that one in seven Americans will face some sort of substance addiction. The economic impact of those collective addictions amounts to $442 billion each year, which rises as healthcare premiums rise. And America has the highest drug-death rate in the world.

“Former inmates return to environments that strongly trigger relapse to drug use and put them at risk for overdose,” according to a 2012 study published in Addiction Science & Clinical Practice. Of the more than 21 million addicts in America, only 10 percent receive treatment, mostly due to a lack of healthcare coverage or lack of treatment centers in their area. According to the Journal of the American Medical Association, 80 percent of opioid addicts don’t get treatment, and a similar 2015 study found a million opioid addicts couldn’t get treatment for their addictions if they wanted it.

That leaves a lot of Americans on our own to struggle through our addictions. I’ve resisted to commit to Alcoholics Anonymous or the 12-Step Program because I wasn’t convinced I had a problem. Now that I am convinced, I realize the importance of having a community to support you and your decision, but I still haven’t attended an AA meeting because the 12-Step Program utilized by AA most often relies on a commitment to religion. Giving oneself up to “a higher power” is the first step, and it wasn’t until I read Russell Brand’s Recovery: Freedom from Our Addictions that I found a non-religious means to put the 12-Step Program to work for me, an atheist.

Since publicly announcing my problem with alcohol on Facebook on Oct. 12, 2017, I found I did have a community in place to help me through my problem with alcohol. Friends of mine who’ve long been out of touch and also quit drinking offered their support, as did my family. Not every alcoholic has friends and family with experience overcoming addiction, however. I guess I’m lucky to have excessively drunk alcohol and done drugs with people willing and capable of realizing and accepting their powerlessness over substances.

Prisoners aren’t leaving prisons with that community in place. They’re reentering communities where they’ll be tempted around every corner. So until we stop putting nonviolent, drug offenders behind bars and instead put them in treatment centers to get the help they truly need, we’ll be inching ever closer to making the new American Dream overcoming addiction.

If you like this, you might like these Genesis Communications Network talk shows: America’s Healthcare Advocate, The Bright Side, The Dr. Daliah Show, Dr. Asa On Call, Dr. Coldwell Opinion Radio, Good Day Health, Health Hunters, Herb Talk