Fake charging stations might be able to hack your phone 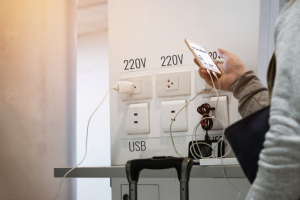 Juice Jacking, apparently, is a real thing. But at this point it doesn’t sound like it’s a widespread threat. What is it? Well, it involves someone loading malware on public charging stations so that when you plug your phone in via USB, it uploads the malway which might be able to lock your device, or worse - export data and passwords to a scammer. USB, as you may or may not know charges your phone but is also able to upload and download information. Which is exactly what the threat is all about.

LA has warned the public of the threat but when asked by reporters if they knew of any known cases on its books, officials couldn’t come up with any. It really does sound like, while it technically might be possible for someone to hijack your cell phone data in such a way, it’s unlikely to ever happen. After a round of Googling, security researchers across the web do say that they’ve seen proof-of-concepts in regards to such malway, but haven’t yet heard of a working public JuiceJacking prototype.

Finally, the major phones have upgraded protection software to protect against this kind of malware so … again, while it’s possible to get JuiceJacked - you’re probably safe.

That being said, there are a few things you can do to protect your phone: