Some of you are trying to get a head start before the family makes you come up with a New Year’s resolution to quit vaping and smoking. So you’ve cut back on tobacco and nicotine and have decided to quit.  Awesome! Within the first half hour of quitting, studies have found your blood pressure and heart rate improve, so your health starts to improve immediately!

Not being able to manage these cravings can put you at risk of relapsing back into nicotine dependence.

Withdrawal from nicotine can manifest in any of the following:

Firstly don’t be afraid to get help if you need to.  Nicotine is a powerful, addictive drug and retraining your body to not ask for it is a challenging process.  Smokefree.gov offers multiple resources to help one quit smoking/vaping.

Your medical provider can offer you nicotine replacement therapy to help you wean slowly, or medications such as (brand names) Chantix and Wellbutrin that can help you with your cravings as you cut back or quit.

Therapy and counselling can also be very beneficial while you are weaning off nicotine.

But some of you will want to quit cold turkey.  How do you manage the cravings then?

So we break this down into biological and psychological factors.

Biologically, we can hit this a few ways.  One, is the food choices you make can help with your cravings.

Vegetables like celery and carrots are great quick-to-grab veggies when you’re in a bind. Citrus fruits like oranges work well. Bananas with their vitamin B and potassium melt in your mouth and don’t leave room for a cigarette. Potatoes have potassium and when not loaded up with butter and cheese are….well… not as yummy.

Peppermint is good at curbing cravings, so when you’re walking out of a restaurant don’t forget to grab some of those free candies sitting there. Ginseng and ginger help with cravings as well, and don’t forget fiber.  Stuffing your mouth with oats, bran and fibrous foods keep you so busy trying to pick them out of your teeth that you are too exhausted to smoke.  Top all of this with lots and lots of water, and you’ll find yourself off the nicotine in no time.

Let’s celebrate.  Some one grab me a beer….no wait! No alcohol!  Alcohol fuels your cravings as does meat and caffeine.  Sorry, I never said it would be easy.

Exercise also helps because it will help you keep busy, increase your endorphins and works on the weight gain that might accompany smoking cessation.  Take a nice stroll every time you feel the need to grab a cigarette.

Which transitions nicely into psychological ways to quit.

Distraction is huge.  As the cravings come on, distract yourself by exercise, reading, dancing, or writing about your journey towards a smoke-free life to help others.

Have index cards written out with reasons to quit.

Have a disgusting picture of tobacco-destroyed lung in the kitchen or wherever you get the urge to smoke.

And get your friends and coworkers on board to help. If they vape/smoke in front of you, it will make it that much harder.  Have a friend, family member designated as your support guide who texts you encouraging messages throughout the day as you try to quit. Remind them that the content cannot include chores or reminders to pick things up on the way home.  There……if these tricks don’t help you quit vaping/smoking, at least you can use them to get out of chores…..

Solving the litter problem once and for all 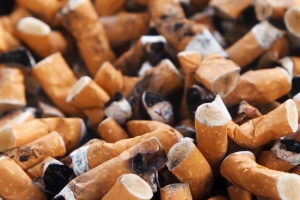 Thankfully, tax increases have been effective in decreasing the number of smokers in America, from roughly 21 percent of the adult population in 2005 to 15 percent in 2015. The same approach should be taken with litterers.

Littering is bad for everyone. No one wants to live in a dump, so why do people leave garbage on the streets and sidewalks? Well, because no one likes to carry trash with them. I have a solution, though, that would end America’s litter problem once and for all. Littering should be added to the list of federal misdemeanors, and litterers should be fined an exorbitant amount or forced to do an unreasonable amount of community service picking up litter.

Cities and states don’t issue enough littering citations and don’t collect nearly enough in fines for littering. While Maryland has a maximum fine of $30,000 for littering, that’s for over 500 pounds of litter. I guess that would apply if you left a broken-down car on the side of the road. Very few states have minimum fines in place. In Colorado the minimum fine is just $20. In Delaware it’s $50. In North Dakota and Utah it’s $100. In Alabama the minimum fine is $150.

State and municipal littering laws are all well and good if enforced, which they’re not. The one time I’ve seen them enforced was on the night of my friend’s 21st birthday. With his sober girlfriend driving, he saw a cop car drive by and screamed the lyrics to a popular N.W.A. song out the window, and followed that up by throwing a gallon of water out the window. Well, the very next car (and the one after that as a matter of fact) was a cop car. We got pulled over, and my friend did his best not to puke on the hood of the cop car. He was issued citations for littering and...littering and….invalid registration. I think he said the littering ticket was $20, and he got out of the registration ticket because he renewed it immediately.

But how many people would litter if they were required to pay a $500 fine to the federal government on top of the state’s fine or do an equivalent amount of community service cleaning up litter along interstate highways? I’d venture to guess you’d rarely see someone flick a cigarette out of a moving car or throw a fast food wrapper on the ground. Even though cops can’t be everywhere at once, just the idea of paying for a DUI keeps people from driving drunk. Why would littering be any different?

You might be thinking the punishment doesn’t fit the crime. Well, there are a lot of punishments that don’t fit the crime in this country. In Minnesota, a seatbelt violation can cost you over $100, and that’s a law enforced to protect you. Why should a law enforced to protect your health be any different? Both laws are technically improving the safety of all Americans.

If you’re a smoker littering is probably a part of your DNA at this point. You don’t put your cigarette butts back in the pack to throw away later, which is exactly what you should do if you’re not near a trash can or ash tray. You should treat every street in every part of the world like a trail in a national or state park. If you don't litter in a national or state park, why should any other place be any different? Just because a national or state park has natural beauty that hasn’t been destroyed doesn’t mean you should destroy the places lacking natural beauty. One way to get around this is to start rolling your own cigarettes. Unlike pre-rolled cigarettes, roll-your-owns are biodegradable and filter-less. Cigarette filters pose the biggest risk to our environment. If you’re worried about tar and need a filtered cigarette, just get a few reusable filters. TarGard makes good products. I’ve tried them, and they work. They also make the cigarette filter made famous by Hunter S. Thompson.

Most smokers have a specific brand, though, and getting them to change is like asking them to stop smoking. I have a friend who has been smoking Camel filters for over a dozen years, and he couldn’t tell you why. It was just the first cigarette he tried.

There are items that can keep you from covering your community in litter, though. The Bell automotive “Butt Bucket” is a cigarette butt receptacle that looks a little too much like a coffee cup, but it keeps butts off the streets. My friend has one of them in his truck, and the smell is surprisingly subtle.

So if you’re going to smoke, please make sure your butts end up in the trash. Gutter butts collect in storm drains and then into waterways, and can clog storm drains and sanitary sewer systems, leaving the streets covered in toxic, cigarette-smelling water. Worse yet, that toxic water kills the transparent crustacean Daphnia, a planktonic animal that occupies a key position in aquatic ecosystems.

Basically, until everyone stops smoking, we have to stop littering cigarette butts, because it’s the easiest way to nearly cut the litter in half.