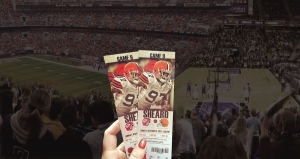 As a Minnesota Timberwolves and Minnesota Twins season ticket holder, I have plenty of personal experience when it comes to overpaying for season ticket packages because of lofty playoff hopes. This year, though, it was the Twins and not the Timberwolves that put a paltry product on the field, even with Jimmy Butler inevitably being traded before the NBA Trade Deadline on February 7 at 3 p.m. EST.

Picking the games I’ll attend each season is like a holiday. I determined which dozen games I wanted to see moments after the NBA schedule was released, and I chose most of my Twins games on the same day. But instead of cutting Russell Westbrook, Paul George, and the Oklahoma City Thunder along with Giannis Antetokounmpo and the Milwaukee Bucks from my 10-game package, I was choosing baseball games based on promotions like Dollar Dog Day (Wednesdays) and $5 Kids’ Meal Day (Sundays). Here are the games I chose (number of tickets in parentheses) to see during the Timberwolves’ 2018-19 impending dumpster fire sale of a season.

The NBA has so much to offer in opposing teams that choosing to attend 10 of 41 home games (24.4 percent) is easier than finding a similar percentage (24.7 percent) of baseball home games worth watching. Seeing LeBron James twice is a no-brainer, as is Anthony Davis once. The Brad Stephens-coached Boston Celtics are absolutely worth the price of admission regardless of whom they’re playing, as are Gregg Popovich’s San Antonio Spurs. James Harden and Chris Paul visiting in a rematch of last season’s playoff matchup I had to see at least once. Golden State as a whole is another no-brainer. That roster could feature five All-Stars if DeMarcus Cousins returns to form. Joel Embiid and Ben Simmons are worth watching, as is Kawhi Leonard, regardless of whom they’re playing. Portland is very well-coached, Damian Lillard is fun to watch, and an April 1 matchup could have playoff implications. Even if the Jimmy Butler-less Wolves aren’t in the playoff picture, they could play spoilers down the stretch. I even got a free ticket to the home opener against the Cleveland Cavaliers, which thanks to Jimmy Butler drama, was a must-see game.

There aren’t as many premium games in baseball. In 2018, I saw just about every premium game the Twins played, including every game they played at home against the eventual champions, the Boston Red Sox (3). I saw every game they played at home against the American League runners-up, the New York Yankees (3). I also saw six (6) of the seven games the AL Central Champion Cleveland Indians played at Target Field (two Twins home games were played in Puerto Rico). Add a three-game set against the Los Angeles Angels and baseball’s best player, Mike Trout, and I still have eight games left to choose. (I had tickets to all three games against Houston at Target Field, but that was through a separate ticket deal for April games.)

The Senators were the second-worst NHL team in the 2017-18 season, and at $60 per seat per game, their cheapest season ticket package leaves a lot to be desired. This might simply be due to the Ottawa market, which is no doubt more interested in the sport of hockey than that of the worst team in the NHL last season, the Buffalo Sabres. While Ottawa doesn’t have an NFL team to compete with the Senators, neither does Buffalo, really.

This is a smoking hot deal to see five premium games you can customize. I chose late season matchups against Tampa Bay, Pittsburgh, Edmonton, Toronto, and Washington. Those are fantastic matchups featuring the best offensive players in hockey: Steven Stamkos, Sidney Crosby, Connor McDavid, Auston Matthews (who should be healthy by March 20), and the Stanley Cup Champion Alexander Ovechkin.

The Sabres also offer the smallest percentage of games (12.2 percent) you can purchase to qualify for playoff ticket priority. Buffalo’s other awful pro sports team isn’t nearly as friendly to your pocketbook and won’t even sell you a season ticket package if you live outside Western New York.

As of Wednesday, October 31 at 5:30 p.m. EST, you could see MVP candidate Patrick Mahomes and the equally electrifying Tyreek Hill and Kareem Hunt along with the rest of the Kansas City Chiefs running Andy Reid’s schemes for $50. Then you could catch Julio Jones making Matt Ryan look better than he is for $50. Then Cam Newton and Christian McCaffrey visit Cleveland, and the final game of your four-game, season ticket package ensuring playoff ticket priority is capped by another wide receiver making his quarterback look better than he is. A.J. Green and Andy Dalton come to town.

Even though most of the games won’t be close, you could argue that four of the most entertaining players playing professional football right now (Mahomes, Newton, Jones, and Green) could all be seen for $200. The Cavaliers couldn’t do better than that simply because they’re a worse team than their crosstown, gridiron counterparts.

The Cavs aren’t selling season ticket packages anymore, and the sales rep couldn’t look back at prices from games already played. But if you want to know how much it would cost to see LeBron visit with his Lakers from the cheapest seats in Quicken Loans Arena, it’s $460 to $500. And that wouldn't even qualify you for playoff ticket priority.

For the 10 best games on the Hawks’ schedule, including the Golden State Warriors and LeBron’s Lakers, plus one more for free at a total under $450, Atlanta offers its fans immense value. For $91 less than I paid to see the same opposing teams visit the newly renovated Target Center, Hawks’ fans can secure their playoff ticket priority, but more importantly, member access to the soon-to-be-renovated State Farm Arena, featuring suites with golf simulators and a barbershop where you can get a shave and a haircut while watching the game.

The Marlins’ “Variety,” “Saturday,” and “Sunday” plans run at least $130, but I could only find a single seat in the cheapest section for the weekend plans. The variety plan, which most likely provides admission to the best games, was not available in any of the cheaper sections of Marlins Park. If we assume, however, that Miami’s Sunday package offers a similar percentage of premium games as Baltimore’s 13-game package and Minnesota’s 10-game, flex plan, then we can expect to see three premium matchups out of the 10. At $13 per seat per game, it doesn’t get any cheaper to secure playoff ticket priority in any league, but you have to watch the Marlins. At least they got rid of that hideous home run sculpture, though.

The price per game might not be as low as baseball or basketball can offer, but the freedom to choose your own games ensuring every one of them is a premium matchup makes Buffalo a go-to town for hockey. My editor in Toronto, Dan Szczepanek, said trips to Buffalo are a Toronto tradition. “It was always cheaper to drive two hours to Buffalo to watch the Leafs and Sabres, get a hotel, and spend a few days than it was to see the Leafs in Toronto.” The fact that you can establish playoff ticket priority for a measly $183 makes me want to buy a Buffalo Sabres season ticket package, and both of my teams are in the Western Conference.

Again, the percentage of premium games offered in the Hawks’ cheapest season ticket package make up for the higher price point per seat. Even if the Hawks operate the same way the Timberwolves do and make your free game the home opener, that was against Dallas and third overall pick in the 2018 NBA Draft, Luka Doncic, whom Atlanta traded for Trae Young at fifth overall and a future first-rounder. If you haven’t seen Doncic play, I assure you, he and Deandre Jordan make for premium entertainment.

It’s not all bad in Cleveland. Even with LeBron leaving and both the Browns and Cavs firing their head coaches in a 24-hour time period, you can still get premium entertainment from the teams and players visiting FirstEnergy Stadium at an affordable price. Even while Buffalo was in town, it would have cost twice as much for the same seats at U.S. Bank Stadium.

Ottawa is the last of our worst teams to provide incredible value when it comes to choosing the quality of opposing teams in their season ticket package. At $60 per game, it’s a bit pricey per seat, but the assurance of seeing the best opposing players in the NHL makes $60 worth every penny.

While just 30 percent of your games are against playoff-caliber competition, you’re paying $13 to see a baseball game. You can’t get a beer and a hot dog at a ballgame for $13.

While the Orioles’ cheapest season ticket package has a marginally higher percentage of premium games than Miami’s, the $17.54 price point per seat is more than it ought to be given their .290 winning percentage last season. The beauty of Camden Yards can’t compensate for the collosal incompetence of baseball played by Orioles at Oriole Park.

Since preseason games can’t be considered premium games, and the Bills are so bad the best game on their schedule annually is a visit by Tom Brady and the Patriots, there’s really nothing to like about being a Bills season ticket holder. The Jaguars were the other “premium” game on the Bills’ schedule this season, and we’ve seen how far they’ve fallen.

Seems my hypothesis was wrong. The NHL, not the NBA, provides the best value to fans of its worst teams when it comes to their season ticket offerings. The NBA is a close second, however, and the Cleveland Browns coming in third was a pleasant surprise. Baseball and the Buffalo Bills, however, have a long way to go to make their cheapest season ticket packages more appealing to fans of the sports’ worst teams.