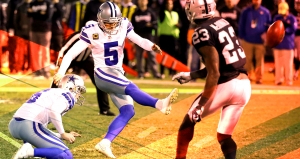 I, thankfully, didn’t watch all of the Week 2 matchup between the Minnesota Vikings and Green Bay Packers on Sunday. That’s the case more and more these days, when in the past I’d hardly miss a second of a Vikings game. Rookie kicker Daniel Carlson, who the Vikings selected in the fifth round of the draft five months prior to waiving him Monday, missed three field goals to waste a valiant, 13-point comeback led by new quarterback Kirk Cousins in Green Bay. I stopped watching after the first two series of the second half with the Vikings down 20–7, and I couldn’t be happier with that decision given the resulting tie.

The Problem with Place-kicking in Football

It bothers me that games featuring more than 100 athletes too big to be able to run as fast as they do repeatedly colliding into each other to obtain property like they’re at war are often decided by the least athletic of the 53 players on National Football League (NFL) rosters. NFL kickers are like generals sitting a comfortable distance from enemy lines sipping on Gatorade awaiting a request for an air strike from their foot soldiers taking heavy fire only to bomb their own troops on occasion.

There were more field goals attempted and made last season than in any other time in the history of professional football, according to Pro Football Reference. The result was 3,664 points scored by kickers in 2017, or almost an even third (32.96 percent) of all NFL scoring. That’s an increase in kicker-exclusive scoring of 5.65 percent over the last 50 years.

Kickers have been ruining the game of football at all levels, especially youth levels, since the game’s inception. Finding someone who could kick and punt the ball were always the hardest positions to fill on our youth teams, and while kickers have gotten better over the years according to FiveThirtyEight, the problem of kickers over-influencing outcomes and under-entertaining fans has worsened with the implementation of longer point-after attempts and uneventful kickoffs.

Instead of stand-still kickoffs that were implemented this year, punters should simply punt the ball as they would on a free kick after a safety. Their teammates wouldn’t get a running start to protect players’ health, but free kicks would result in fewer touchbacks and a higher potential for kick return touchdowns — once the most exciting play in the sport now all but extinct. Most importantly, though, free kicks would make place-kickers entirely unnecessary.

My research found kickers were the exclusive scorers in six NFL games last year, and the touchdown-to-field-goal ratio has declined by almost an entire touchdown per successful field goal since 1975. While these ridiculous roughing-the-passer penalties will assuredly increase the touchdown-to-field-goal ratio, achieving the all-time high of 2.5 touchdowns scored per successful field goal converted is not probable unless kickers are removed from the game.

The more fourth-down plays there are in games, the more intriguing those games will be. Games’ outcomes need to swing on one play every series instead of one play every half. Football is not providing enough moments of perceived momentum shifting from one team to the other. Without place-kicking, fans would be on the edge of their seats more often, as the Dan Bailey bailout would be unavailable to the Vikings or anyone else, forcing coaches to utilize more forward passes — the play that saved American football from extinction and made it the behemoth it is today. There would also be fewer breaks in the action for commercials, but what’s the best option for solving football’s place-kicking problem?

Removing place-kickers from the game doesn’t necessarily mean field goals have to go away. While I think goal posts unnecessarily obstruct the views of fans, we don’t have to tear them down (although it’d be cool if they were moved behind the fans so they could go home with souvenir footballs). They are a symbol of the sport after all, and what would college students do on Saturdays after a big win if they couldn’t tear down the goalposts? They’d probably be at higher risk for alcohol poisoning if they didn’t exert that effort.

If the NFL wanted to continue employing place-kickers and make games more exciting, it could simply make field goals worth two points instead of three. How a field goal is worth more than a safety is disrespectful to defenses everywhere, even though your offense gets the ball back after the defense scores a safety. While kicking was highly emphasized when the game was conceived, the field goal’s point value decreased from five in 1883, to four in 1904 and three points in 1909, three years after what many believe to be the first legally completed forward pass.

After more than 100 years without a change to the field goal’s point value, I’d say we’re long overdue. But lowering the point value of a field goal does not affect the risk in attempting a field goal, which is the actual problem. Kicking is a bailout in football. Both punts and field goal attempts bail out an offense incapable of scoring touchdowns. I’ve got no problem with punters. I’ve seen punters make plays, but I’d prefer to watch the NFL’s place-kickers play soccer if they’re capable of running and kicking a moving ball. Removing place-kickers from football would enhance the intrigue of games by forcing coaches to be more creative and take more chances on both sides of the ball. That brings me to Rule 1 of football re-imagined without kickers.

“All teams must attempt a two-point conversion after scoring a touchdown.”

That’s where games should be won and lost — in the trenches between lineman at the goal lines. The men risking the most should determine the outcomes of games, but field goals wouldn’t necessarily have to disappear. They could just be altered. The NFL simply needs to make the field goal attempt a less enticing option for coaches — make the bailout riskier.

I recommend the NFL adopt something like the drop goal in rugby, where a player can drop the ball on the ground and kick it through the uprights on any down. The quarterback could avoid a sack and dropkick the ball through the uprights on second down for three points. That might be a big enough change to eliminate field goals altogether, but punters would eventually get the hang of drop-kicking to make it a less riskier option. It’s not as though they have much else to do during practice.

To up the ante even further, the ball’s placement on the field should depend on how close you get to the goal line. The closer a team gets to scoring, the more difficult a drop goal attempt should become. That’s why I recommend the hash marks running down the middle of a football field get wider and wider as they get closer and closer to the goal line. This might even be enough to keep place-kicking in the sport while minimizing kickers’ control over games’ outcomes.

Counteracting a Potential Decrease in Scoring

While we’re not eliminating a third of all scoring in football, points will be harder to come by in the game without kickers. A point-after attempt and two-point attempt have almost the exact same expected value, so forcing teams to go for two would result in almost the exact number of points as point-after attempts. But field goals alone accounted for 23.37 percent of points scored in 2017, and teams won’t be trading those field goals for drop goals or touchdowns at a 1:1 or even 1:2 ratio. That said, an effort should be made to counteract a potential decrease in scoring by providing more scoring opportunities.

Football and rugby are unique in that they offer multiple means of scoring points. You only score in baseball when you touch home plate. You only score in basketball when you put the ball through the hoop, and you only score in soccer and hockey by putting the ball or puck in the net. Scoring in football involves either kicking the ball through goal posts or taking it across a goal line (or downing it there in the case of a safety). But why stop at two means of scoring points? That brings me to Rule 2 of football re-imagined without kickers.

“Award one point for each sack or tackle for loss.”

Awarding one point for sacks and tackles for loss would almost replace every point scored by NFL kickers. Based on 2016 totals, there were 1,118 sacks and 2,218 tackles for loss, totalling 3,336 potential points. Kickers accounted for 3,669 points in 2016, and spreading those points around to players playing and sacrificing most makes for a more democratic game. And frankly, defensive players deserve to score more.

Defensive players seldom score, especially big defensive players. An offensive lineman can at least declare himself eligible and catch a touchdown pass. Defensive players have to either force a fumble, pick it up and run into the end zone, grab an interception and run into the end zone or tackle the ball carrier in their own end zone for a safety. And now that defensive players have to defy physics and somehow stop more than half of their body weight from falling on the quarterback during a sack, their team should at least get a point if it’s likely the sack will result in a 15-yard penalty and automatic first down for the offense.

While this rule might result in more coaches challenging the spot of the ball, I’d rather watch a replay of a quarterback sack or tackle for loss to determine if the ball carrier reached the line of scrimmage than watch a kicker come on the field and make or miss a kick sandwiched between commercials. And the NFL is far past due for placing sensors on the ends of the football and on the players’ knees and elbows to determine the exact location of the ball when the ball carrier is down by contact. But that’s another Grandstand Central story for another day.

Imagine the Vikings just scored a touchdown to tie the Packers with no time left on the clock and only the two-point conversion left to be played. With this rule, either team could win or lose the game right there at the goal line. The Vikings could either convert the two-point attempt to win or take a sack or tackle for loss to give the Packers the win. Green Bay could also intercept the ball or recover a fumble and return it for two points as well. That’s a whole lot more exciting than bringing a kicker onto the field to attempt an extra point converted 94 percent of the time in 2017. It’s also more indicative of which is the better team.

Unless the NFL takes place-kicking out of the game, I’m boycotting the league upon the end of Cousins’s tenure with the Vikings or if the Vikings win the Super Bowl — whichever happens first. And I’m not just saying that because of the Vikings’ rich history of kicking woes in big games. They are the franchise who had a kicker who shall not be named go an entire season without missing a kick only to miss one that would have sent them to the Super Bowl. More recently, they had a kicker who shall also go unnamed miss a 27-yard field goal that would have extended their playoff run in 2016. I just can’t bring myself to pay attention to the game of football anymore. The kickers keep kicking my attention elsewhere.