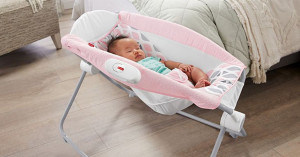 On Friday, April 12th, Fisher-Price voluntarily recalled the “Fisher-Price Rock ‘n Play Sleeper,” after the U.S. Consumer Product Safety Commission (CPSC) discovered more than 30 babies have died while in the rocker since 2009 - 10 of them occurring since 2015. The CPSC said anyone who purchased the Rock ‘n Play should immediately cease using it and contact Fisher-Price for a refund. The American Academy of Pediatrics agreed with the findings of the CPSC calling the sleepers “deadly,” and urged Fisher-Price for the recall as well.

No one is specifying exactly how the babies died, but some were from "suffocation" and most seem to have occurred after an infant "rolled from their back to their stomach," presumably causing the cradle to tip and the child to fall. A week ago Fisher-Price looked into the infant death report from the CPSC, and issued a warning about the product in question, saying:

In other words - read instructions and don’t use a product for something it is not designed for - because that might be unsafe. Okay. Fair enough. But, that’s clearly “covering our own ass” speech. It’s not like parents were doing something completely unreasonable with the product. The Rock ‘n Play is a soft cradle that vibrates and it’s sole design purpose is to help babies fall asleep, and parents are using the rocker to do exactly that. And, at least 32 times that the investigation has (so far) uncovered - a parent’s reasonable use of the product resulted in the tragic death of their baby.

The recall was the right thing to do.

"A child fatality is an unimaginable tragedy. For almost 90 years, Fisher-Price has made the safety of children our highest priority.

In recent days, questions have been raised about the Fisher-Price Rock 'n Play Sleeper. We stand by the safety of our products. However, due to reported incidents in which the product was used contrary to the safety warnings and instructions, we have decided to conduct a voluntary recall of the Rock ‘n Play Sleeper in partnership with the Consumer Product Safety Commission.

Fisher-Price has a long, proud tradition of prioritizing safety as our mission. We at Fisher-Price want parents around the world to know that we have every intention of continuing that tradition.

While a Detroit-area doctor has been charged with performing genital mutilation on two young, Minnesota girls, the parents, who misled their children into believing they were taking a “girls’ trip,” have yet to be charged with child abuse as of this writing.

Female circumcision is most commonly done in Africa, Asia and the Middle East. Egyptian politician Elhamy Agina supported the practice because Egypt’s men were “sexually weak” and could not meet the sexual demands of Egyptian women. So punish the women, right?

Many instances of female genital mutilation go unreported, but instances have tripled since 1990 according to this report by the Government Accountability Office. This is the first federal case of its kind under the federal statute passed in 1997. Female genital mutilation is governed by Title 18, Part I, Chapter 7, Subsection 116 of the United States code, but only focuses on the doctor performing the unnecessary surgery. The entire law follows:

(a) Except as provided in subsection (b), whoever knowingly circumcises, excises, or infibulates the whole or any part of the labia majora or labia minora or clitoris of another person who has not attained the age of 18 years shall be fined under this title or imprisoned not more than 5 years, or both.

(c) In applying subsection (b)(1), no account shall be taken of the effect on the person on whom the operation is to be performed of any belief on the part of that person, or any other person, that the operation is required as a matter of custom or ritual.

(d) Whoever knowingly transports from the United States and its territories a person in foreign commerce for the purpose of conduct with regard to that person that would be a violation of subsection (a) if the conduct occurred within the United States, or attempts to do so, shall be fined under this title or imprisoned not more than 5 years, or both.

The parents will be subject to state child abuse laws, but no charges have come from the State of Minnesota as of this writing. The penalty for causing “substantial bodily harm” to a child is five years in prison and/or a $10,000 fine. Does that penalty fit the crime? Dr. Dalia Wachs doesn’t think so.

“Are you kidding me? I mean, that should be a lot longer,” she said, adding later that “if you psychologically traumatize someone at that age, especially a child … these girls might not ever have an interest in sex.”

Wachs thinks if some of the more than half million American women were to enroll in a study to determine the psychological effects of female circumcision, it would be helpful in determining a punishment that fits the crime, because “there are no health benefits” from the surgery.

The federal law should be altered to provide harsher penalties to parents forcing this procedure upon their children. Imagine if your parents did this to you at age seven and then you had to continue living with them for another decade or so, knowing they had forever altered your ability to enjoy sex and quite possibly your ability to have children of your own, according to the World Health Organization. Everyone has the right to attempt to be better parents than their own parents, unless, of course, you have parents like these.