Displaying items by tag: of the Dead 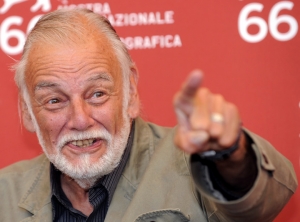 Update: This story was written a few weeks before the passing of George Romero. I may not like anything Mr. Romero has created in recent years but we will always have the Holy Trilogy of zombie films. And man-o-zombie do I love those three films! I was always partial to "Dawn of" but recent viewings of "Day of" have significantly warmed me to its horror charm (where charm = Bub!). Mr. Romero, literally, changed the face of filmmaking. Before "Night of" zombies were afterthought monsters in little seen bad horror films (that I love). Now zombies are mainstream fucking everywhere, watched by hundreds of millions -- especially in bad horror films (that I love!). Mr. Romero is gone and there will never be another (good or bad) true, "of  the Dead" film. BUT ... perhaps ... one day a crazy madman genius will perfect a resurrection machine -- and perhaps that mad scientist will raise Mr. Romero -- and perhaps it will all go spectacularly wrong and zombie Mr. Romero himself will usher in a hubris driven mad science zombie apocalypse! Where I will be one of the awesome survivors in a world gone "of the Dead!" Maybe you'll be there with me. Together we go forth -- murdering the hell out of zombies left and right! But until that glorious day -- rest in peace, Zombie Maestro.

Zombie maestro George Romero, director of the classic "of the Dead" trilogy - Night of the Living Dead (1968), Dawn of the Dead (1978) and Day of the Dead (1985), is still alive and kicking. And he’s making another zombie flick!

While some might rejoice at the very idea of the hundred and ninety-eight year old (not actual age) horror director making another movie -- I don’t seem able to find a shred of “care” anywhere inside my soul. Once upon a time we had a single zombie voice in the world of cinema. And the voice was pretty compelling. Now we are over saturated with thousands of zombie voices in the world of TV and cinema - many good, many bad but to be honest, most of them are just adequate.

Which is fine. I dig zombies as much as the next horror buff. I even watch bad ones. Like -- from beginning to end. I can't seem to bring myself to give a shit about the new Twin Peaks, which, to me, plays out like a bad daffy duck cartoon. But if you sit me in front of Zombies of Madison County IV and I will watch that shit. No accounting for taste, I guess.

But as for Romero keeping up with a new, young breed of horror filmmakers I just don't see it. Especially as evidence by has three misfires of recent years  - Land of the Dead (2005), Diary of the Dead (2007) and Survival of the Dead (2009), all of which seem they were filmed by low IQ Romero imitators.

But, nope. All written and directed by the zombie maestro himself.

Call it ageism but I seriously doubt that old dudes can make genre pictures for teenagers. You might be able to convince me that Spielberg has it in him to make family friendly young adult (and / or kid) movies. But Romero is no Spielberg.

I just don’t believe the crushing majority of old men filmmakers can keep up with what’s really relevant to today’s youth, culture and counter-cultures. And do you know who watches horror films? Mainly -- the coveted target audience - 18-24 year olds.

I am immediately reminded of Woody Allen’s worst film - Anything Goes (2003) upon which Mr. Allen tries to write dialog for twenty year olds. Mr. Allen, being at the time sixty-seven years young. Sure -- it’s possible a sixty-seven year old white man can write believable dialog for a twenty year old girl, but very unlikely. And in the case of Anything Goes -- obviously, Allen can’t. (I will also go out on a limb and say Jason Biggs & Christina Ricci give two bumbling performances, which certainly doesn’t help the believability of the screenplay. So it’s not entirely Mr. Allen’s writing that is at fault. It’s also, his directing!).

As for modern zombie movies? Romero just can’t keep up it seems. And has lost the touch he once had when creating his original trilogy. Of course what audiences wanted back then is much different from what they want now.

And if Romero honestly can’t understand why directors like David Fincher get the nod to make World War Z II and Romero doesn’t -- well, then he doesn’t understand it.

But I sure do.

Mr. Romero -- you’ve had a great run. And you might have good films left in you. But your new proposal for Road of the Dead doesn’t sound like one of them. Please. Stop. Making. Zombie. Movies.

But hey, Dear Reader, don't take my word for it. Let me know if this sounds like the zombie movie you’ve always been waiting for:

From the Indiewire article linked above, Mr. Romero explains his pitch:

“In the darkest days of the zombie apocalypse, the last safe place on earth is anything but, as a mad despot uses the spectacle of high-octane carnage to keep control of his populace” — suggests a “Mad Max” vibe. It also serves to remind that, from “Dawn” to “Day” to “Land” and now “Road,” the decades-old franchise is ever-changing.”

“There was a sequence in ‘Survival of the Dead’ where there’s a zombie that’s behind the wheel of a car, and Matt (Romero's new director) proposed an idea: ‘How about zombies that know how to drive!?'” Romero explained over the phone during a 4th of July interview. (He lives in Canada, where he’s a permanent resident.) That setup is certainly in keeping with some of the biggest action movies in recent years, a connection Romero readily copped to: “It’s ‘Fast and the Furious’ with zombies at the wheel.”

Wow. You read that right, "Zombies that know how to drive."

I don’t know about you -- but I can not wait to never watch that movie.