Opinion: The Turpin parents are guilty. Lock them up forever. 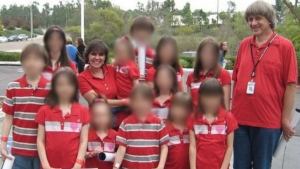 A California couple has been busted for torture, abuse, child neglect and false imprisonment against their 12 children. On Sunday, one of the teenage daughter captives scrambled to freedom by crawling out of a home window and dialing 911.

It was an escape plan, two years in the making.

After receiving the distress call, two deputies and a supervisor arrived on the scene and found a filthy house in unlivable conditions, a bewildered mother who just couldn’t understand why the police where at her house, and twelve neglected and abused children - some of which were still chained to their beds.

Police wasted no time arresting the two soulless ghouls responsible - the parents - David Turpin, 56, and Louise Turpin, 49. Now both are facing charges of torture, abuse and false imprisonment. Two parents who were, by admission, homeschooling Christians.

On January 18th the married couple pled not guilty to:

And those are just the crimes they committed. And it doesn’t even mention that their “homeschooling” was ludicrously lacking as the children, when rescued and questioned, didn’t have a basic understanding of things. They didn’t know what a police officer was. They didn’t understand what medication was.

It just goes on and on.

Now, I didn’t bother added the word, “allegedly” even though the law presumes the Turpin’s are innocent until the state proves them to be guilty.

But I’m not part of their legal trial so I will go out on a limb and say these two fuckers are guilty, guilty, guilty as sin. And I want them to pay.

Lock them up. Throw away the key.

Or as Rust Cohle says to a child molester in season one of True Detective, “The newspapers are going to be tough on you. And prison is very, very hard on people who hurt kids. If you get the opportunity -- you should kill yourself.”

That being said, I hope those kids are now surrounded with care, love and support. They have their entire free lives ahead of them now and I hope they can recover from their trauma and go on to accomplish great things.