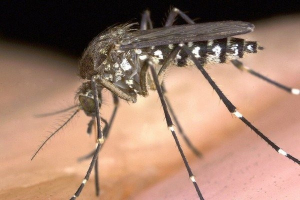 A 6th case of West Nile virus has been confirmed in Clark County, Nevada. The Southern Nevada Health District has declared an “outbreak of mosquito-borne diseases” following new cases of the virus being reported.

This summer has been a wetter season in the Southwest, most likely causing an uptick in mosquito activity.

States throughout the country have been reporting cases of West Nile virus as well, with the highest occurring in Arizona (42 cases as of 7/23/19 per CDC).

‡PRESUMPTIVE VIREMIC BLOOD DONORS (PVDS) ARE PEOPLE WHO HAD NO SYMPTOMS AT THE TIME OF DONATING BLOOD THROUGH A BLOOD COLLECTION AGENCY, BUT WHOSE BLOOD TESTED POSITIVE WHEN SCREENED FOR THE PRESENCE OF WEST NILE VIRUS. SOME PVDS DEVELOP SYMPTOMS AFTER DONATION.

What is West Nile virus?

West Nile virus was originally discovered in the 1930’s in the West Nile district of Uganda.  It is believed to have reached the United States in the late 1990’s.

It’s in the family of Flaviviridae in which the disease is vector transmitted, such as by ticks, or mosquitoes, and can infect mammals as hosts. West Nile is in the same family as Zika, Yellow Fever, Dengue Fever, and Japanese Encephalitis.

Culex genus/species of mosquitoes are the usual culprit.  They feed from evening to morning, hence are more active during those times.

How is West Nile transmitted?

A mosquito contracts the disease while feeding on an infected bird and then can transmit it to humans.

What are the symptoms of West Nile virus infections?

80% of those infected do not exhibit symptoms.  Some however, may elicit the following if they have mild illness:

Rarely (1 in 150 people) may become seriously ill with neuroinvasive symptoms.  These include:

Since mosquitoes are the primary vector, avoiding them is paramount to limiting infection.  We recommend the following:

Clean up areas of standing water around the house such as kiddie pools, puddles, buckets as they provide a breeding ground for mosquitoes.

Use DEET or insect repellant that can also be sprayed onto clothes when planning to be outdoors.

Be aware that many mosquitoes are active from dusk till dawn.

If bitten by a mosquito, contact your local medical provider if you have any of the aforementioned symptoms.