Gene's Technology Corner: Weekend radio update and musings about Apple products that may be too sophistacated for their own good 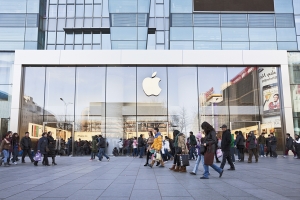 For the very first time in 19 years, I’ve been on hiatus for a while, with only occasional update to this site. I’ve also been going through a painful period of financial instability, which has certainly put a damper on my creative process.

At the same time, the rush of news from Apple hasn’t been nearly as frequent or interesting as it used to be, and repeating the old tropes about tech pundits attacking the company for the usual bogus reasons has become boring.

In this week’s main column, below, I also wonder for the first time about Apple at last becoming a “normal” company, in which its new products may not seem so exciting and innovative as they used to be. But I’ll get to that and its ramifications shortly.

In the meantime, I am working on lots of new articles, including a review of the Beats Studio 3 Wireless headset that debuted last month. I have always been a reluctant headphone user, even going back to the days when I worked in a traditional radio station studio. With its emphasis on style and comfort, I have high hopes for the new Beats gear, and I was able to get a review sample from the manufacturer.

Is the new Beats bass-heavy, as older models were supposed to be? Is it worth its $349 purchase price, the same range as the equivalent Bose Quiet Comfort? I’ll let you know soon.

That takes us to this week’s episode of The Tech Night Owl LIVE, in which we presented a special holiday season segment, featuring security guru Scott Nusbaum, senior incident response at TrustedSec (a white hat hacking firm). Its main focus was a frightening new risk to online shoppers called “formgrabbing.” Nusbaum also explained what this means when you place an order, and how online criminals can gather your personal information, such as your address and credit card numbers and use them to steal your money. Are there ways to protect yourself from this threat? Nusbaum covered the whole gamut of online shopping dangers and how to navigate through the troubled waters.

In a special encore segment, you also heard from commentator/podcaster Peter Cohen, who focused on “Right to Repair” and the upsides and downsides. Peter offered his personal experiences as the employee of an authorized Apple dealer and how it influenced his opinion about whether Apple and other companies need to allow more repair freedom. There was also a brief discussion about the concept of states’ rights and how it affects customers where such laws vary from state to state. The discussion also covered the HomePod and its possible value as a smart speaker. Both Gene and Peter explained, at length, why a HomePod is still not on their shopping lists, and whether Apple could sell more copies if it loosened its dependence on Apple’s ecosystem when it comes to being able to listen to your stuff.

On this week’s episode of our other radio show, The Paracast: Gene and Randall present long-time UFO researcher and author Jerome Clark, who will discuss the third edition of his multivolume magnum opus, “The UFO Encyclopedia.” You’ll learn about the new material, the conclusions that were altered as the result of new research, particularly the Roswell UFO crash and how the case stands after all these years. Indeed, is any reported UFO crash credible? Randall and Jerry also debate the “experience anomaly,” and its impact on certain cases, such as abductions. Are all UFOs physical craft, or are other forces at work here? Jerry is also a songwriter whose music has been recorded or performed by musicians such as Emmylou Harris, Mary Chapin Carpenter, and Tom T. Hall.

Our image of Apple, Inc. has long been that of a maverick company that defies the conventional wisdom and goes its own way. Here’s to the “crazy ones” indeed!

In the old days, the most famous example was the Macintosh personal computer. Where computers in the early days used an arcane text-based interface, paying lip service to color displays, Apple provided a graphic user interface designed to make it warm and fuzzy even to people who couldn’t adapt to the traditional PC.

Steve Jobs always envisioned the Mac as a computing appliance, and the original model actually offered no way for you to do any upgrades to memory and other components. In passing, the Apple of 2018 has mostly reverted to this concept, and what you buy is as upgradeable as your toaster oven. Period!

But Apple really attained prominence with the original iPhone that, in a few years, became the company’s best-selling product. Indeed, its success gave the more critical pundits ammunition to claim that, if iPhone sales declined — and nothing is forever — the company would be in deep trouble.

Each year, the iPhone received upgrades. Even when the new model seemed little different from its predecessor, at least externally, there were plenty of changes inside. Consider the iPhone 5s, which for all practical purposes wasn’t distinguishable from the iPhone 5. But in addition to faster performance and a better camera, it provided the first iteration of Apple’s Touch ID fingerprint sensor.

If you examine the spec sheets year-over-year, lots of innovative engineering is present. Unlike all other smartphone makers, save for Samsung, Apple designs its own CPUs and, since last year, its own graphics hardware. The proof is in the pudding, as the latest “X” series iPhones tout performance that is in the range of the more powerful notebook computers. The latest iPad Pro promises graphics performance at the Xbox level.

At the same time, the annual double-digit growth of the iPhone is long ago and far away. Except for the poorest third-world countries, most anyone who wants or needs a smartphone has one. So most units sold are replacements, and Apple builds reliable gear and supports it with OS upgrades for several years, which slows the upgrade cycle.

Shorn of the new features, an iPhone 6, running iOS 12, can deliver credible performance that should satisfy most people except for those who require instant response, a better camera, and superior displays. Some features, such as 3D Touch, essentially went nowhere and isn’t even present on the iPhone XR.

Knowing that sales have flattened, Apple has devised other ways to boost revenue, beginning with the $999 iPhone X last year. For 2018, the iPhone XS Max begins at $1,099, and the price goes up fast if you choose larger storage options.

Even though Apple was criticized for ignoring the Mac in recent years, the very newest models are more expensive even as PC makers continue to rush towards the bottom in pricing their hardware. The presence of the controversial Touch Bar meant an increase of several hundred dollars for recent MacBook Pros.

After four years, Apple introduced a new, more powerful Mac mini, but the base price increased from $499 to $799. If you click Customize on Apple’s ordering page, you can increase the price to $4,199, and that’s before you acquire a keyboard, input device and display.

The professional grade iMac Pro starts at $4,999 and maxes out at $13,348 before you get to a VESA mounting kit. Heaven knows what the promised Mac Pro replacement will cost when optioned to the hilt.

This is not to say these prices are too high. When you compare the prices of Apple gear to direct PC competition, it is usually quite competitive. Apple just doesn’t play in the low end of the market.

The new iPad Pros are also more expensive too and so is the Apple Watch Series 4.

What this means is that the average sale price has gone up. So despite the complaints, it’s clear that millions of customers are happy to pay a higher price for a premium product. At the same time, Apple is offering services, such as Apple Music and iCloud, for which you pay monthly fees. The fastest growing segment of Apple’s business is, in fact, services.

Apple realizes that it can earn a lot more money from every satisfied customer.

But has it reached the point where these products have become so sophisticated that most users will never, ever use the new features? As I watched Apple’s Keynote slide shows listing the features of its newest gear at the iPad/Mac event in October, it started to become a blur. Dozens of amazing features, state-of-the-art performance, but how much did it mean for all but a tiny percentage of professionals?

It had a same old same old feel. A slick production, enticing videos to demonstrate the new capabilities and the amazing engineering, and boasting about what you can do with these machines.

This isn’t to say that smartphones, smartwatches, tablets and personal computers are good enough and there’s no need to improve them. As I said, the price of admission is no doubt worth it. By charging more money, and boosting services, Apple earns more revenue. Unit sales don’t matter so much, which is why it joined other companies in no longer revealing them in the quarterly financial reports.

Slick, professional, but is the excitement gone? Has a middle-aged Apple become just another boring multinational corporation? It’s a tricky question no doubt, but it’s something I’ve been thinking about of late.