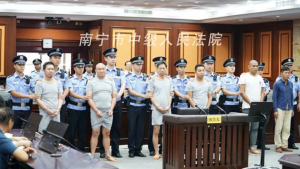 In one of those, “no one would believe this if it was in a movie,” stories we bring you “Wholesale Hitman!” Over a real estate dispute gone sour & a lawsuit in China, mogul Tan Youhui hired a hitman to kill a rival developer.

You see, in 2013 Tan Youhui hired Xi Guangan for $2m Yuan (approx. $275,000 with all further money being translated into US dollars) to kill his business rival. But, um … well, Guangan kind of … didn’t do it. He hired a second man to do the job for him!

Xi Guangan hired Mo Tianxiang for half the sum he had received up front. Now we have a second hitman on the job! Only, um … the second hitman didn’t do it, either. He paid a third hitman to kill the developer and that’s how Yang Kangsheng got the contract. Kangsheng, the third hitman was offered about $38,000 up front and promised an additional $71,000 upon contract completion.

But, plot twist (that you probably saw coming from a mile away)! The following year, which brings us to 2014 - Yang contracted Yang Guangsheng, a fourth hitman and offered him $28,000 up front and a promise of an additional $71,000 upon completion of the contract. So, by now Yang Kangsheng (the 3rd hitman) was anticipating the $38,000 up front and the additional $71,000 which all would go to the fourth hitman leaving the third hitman with only a $10,000 profit. Okay. I guess it’s still $10,000 right? Nothing to shake a stick at.

Well, as the fates would have it, the fourth hitman - also didn’t want to go through with it. Several months later, the second Yang hired Ling Xiansi for $14,000 to, you guessed it - kill the developer!

Ling finally spilled the beans to the actual target about the assassination plot and then, in another bizaarre plot twist the two of them faked his murder up to and including staged photos attempted to collect the cash and, presumably evenly split it.

Which didn’t work. So, the developer, who was the target, finally went to the police and reported the plot. As one hitman led to the next, each spilled the beans on the person that hired them and soon enough, all of them, including the original man who hired the first hitman, had been arrested.

Seriously, though. Can you imagine sitting in a movie theater watching this plot unfold? By the fourth hitman hired I’m sure most audience members would be like, “Really, he hired a fourth hitman! This is starting to get a bit much!” By the time that fifth hitman was hired audience members would be eye rolling their disbelief in movie theaters everywhere!

But, as they always says, “Truth is stranger than fiction.”