Americans have been so “Hollywoodized” that they think that the devil is going to come to them with a rack of horns on his head and a pitchfork in hand to steal, kill and destroy (John 10:10). Scripture teaches us the opposite.

Those that were approved of the Lord, those who were warning the people to flee from the wrath to come, and those who were proclaiming God’s truth were carpenters, fisherman, tax collectors, foolish (1 Corinthians 1:27), and unlearned men (Acts 4:13), weak, as well as men dressed in the attire of camel’s hair, leather belts, eating locusts and wild honey (Matthew 3:7).

In contrast, those that were highly esteemed (Luke 16:15) and approved of among men (Are you listening, America?), Jesus was damning

“Woe unto you, scribes and Pharisees, hypocrites! for ye are like unto whited sepulchres, which indeed appear beautiful outward, but are within full of dead men’s bones, and of all uncleanness.” -Matthew 23:27

“Woe unto you, lawyers! for ye have taken away the key of knowledge: ye entered not in yourselves, and them that were entering in ye hindered.” -Luke 11:52

And I ask, how many in the American Church and American politics fit the physical and mental characteristics of those whom God was damning?

Jesus also said, “Verily I say unto you, that the publicans and the harlots go into the kingdom of God before you” (Matthew 21:31).

And as I was writing out this Holy Ghost download (Matthew 16:18; Acts 2:36) that I was receiving, I immediately began to realize that this is happening because people that profess to be Christians do not even know the Scriptures (John 7:17), which, in fact, is a lack of Christianity (1 John 2:4). They think that because someone claims to be a Christian, then it must be so. Remember, no one rebuked the religious hypocrites more than Jesus (Matthew 23).

“Thus saith the LORD; Cursed be the man that trusteth in man, and maketh flesh his arm, and whose heart departeth from the LORD.” -Jeremiah 17:5

These hypocrites have exchanged the King that has bought them with His own blood (1 Corinthians 6:20; 1 John 2:2) for a  fallen and reprobate man that sells them out (Luke 22:48).

Instead of man submitting to the Lawgiver, they slavishly serve the lawbreakers (Isaiah 14:12-15).

Instead of them serving out of love the One that cannot and will not lie (Numbers 23:19), they submit to those who lie on a daily basis.

Instead of man submitting to the immutable God (Hebrews 6:18), they submit to fallen man and every wind of his made up doctrine, the sleight of men and their cunning craftiness as they continuously deceive.

“That we henceforth be no more children, tossed to and fro, and carried about with every wind of doctrine, by the sleight of men, and cunning craftiness, whereby they lie in wait to deceive;” -Ephesians 4:14

On the other hand...

“Blessed is the man that trusteth in the LORD (And magnifies His government), and whose hope the LORD is.” -Jeremiah 17:7

Friends, no matter who the president is (Romans 13:3-4) remember, he has no title of nobility (Article 1, Section 9, Clause 8, US Constitution).

Another way of saying this is either Jesus is your King, or your man made king will be your god (Exodus 20:3).

On April 18, 1775, John Adams and John Hancock were at the home of Rev. Jonas Clarke, a Lexington pastor and militia leader. That same night Paul Revere arrived to warn them of the approaching Redcoats. The next morning, British Major Pitcairn shouted to an assembled regiment of Minutemen:  "Disperse, ye villains, lay down your arms in the name of George the Sovereign King of England."

The immediate response of Rev. Jonas Clarke or one of his company was:

"We recognize no Sovereign but God and no King but Jesus."

Man's Most Evil Creation is God 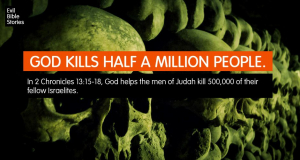 Man has created plenty of inherently evil things: weapons of war like guns and bombs, addictive drugs like nicotine, opioids, and crack cocaine, but none are more evil or responsible for more death than the creation of God.

Religion was the law before the law. It was a means to control populations of peasants and slaves through fear and pain. Egyptian emperors propagandized their godliness so slaves would die building the pyramids that would serve as their final resting places and lasting reminders of their godliness. People worshiped gods and goddesses and continue to do so out of fear or to relieve pain inflicted upon them by authoritarians or unfair economic systems and circumstances.

More wars have been started and more people killed in the name of god than for any other reason. Reconquista, or the Iberian Religious Wars between Christians and Muslims for the Iberian Peninsula, killed an estimated 7 million over 721 years. The Christian Crusades—nine of them—sanctioned by the Latin Church to acquire the Holy Land from Muslims, are estimated to have killed 1.7 million people. The French Wars of Religion between Roman Catholics and Huguenots are estimated to be responsible for the deaths of 3 million people. That’s 11.7 million deaths. The Jewish-Roman Wars push the total over 12 million. The German-led genocides of the Jews and Christian Poles killed another 12 million at least.

The Bible has been and continues to be used to justify slavery and white supremacy, demonize bisexuality, and deny climate science. “The Immaculate Conception” is still used to justify the violation of living, breathing women’s rights—even raped women—in favor of unborn babies. And Pope Benedict XVI actually said the use of condoms could worsen the spread of HIV/AIDS in Africa, with Catholic Churches telling African children not to use condoms, contributing to the spread of the epidemic.

Organized religion is also responsible for thousands of sexual crimes against children throughout the world. The Illinois Attorney General found that more than 500 priests accused of sexual abuse have not been publicly identified by Catholic Church. In Boston, more than 130 people have alleged former priest John J. Geoghan fondled or raped them over the course of three decades through a half-dozen Greater Boston parishes. From 2001 to 2010, the Holy See, the central governing body of the Catholic Church, considered sex abuse allegations involving about 3,000 priests dating back fifty years.

Religion has certainly saved plenty, but its track record of evil is well-documented. Religion’s rap sheet is long, which should make you skeptical of its intentions, regardless of whether it’s saved someone you know. Personal experience means very little when considering thousands of years of documented history.