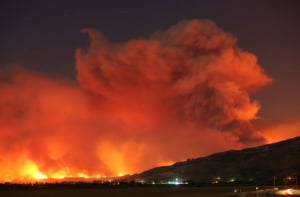 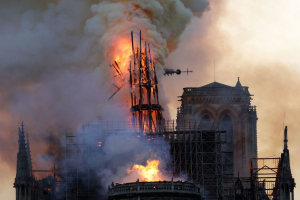 A huge fire has engulfed one of France's most beloved landmarks - Notre Dame Cathedral, and it sounds like local firefighters are not sure they can save the building. So far, the roof has collapsed and the next hour or two appear to be critical in determining if the building itself can be saved.

No one is exactly sure how the fire started but officials claimed it could have been linked to recent renovation work. As of yet, the city is calling the fire an “accident.”

Construction of the cathedral began in 1160 and was largely completed by 1260, though it has been modified frequently in the following centuries. That means for more than 800 years Notre Dame has watched over Paris. And it’s not just the building at risk - there are irreplaceable pieces of art and one of a kind antiquities inside the building. All of which will be gone if the blaze cannot be controlled. The interior Minister of France tweeted that 400 firefighters are on the scene, meanwhile thousands of Parisians have turned out in the streets watching in stunned disbelief as the disaster unfolds.

Update: I just read that emergency services said they had salvaged as much artwork as possible, reporting that “nearly all of it” was able to be removed and saved.

Update: It sounds like a fire official has told local Paris news that the Cathedral has been saved from "total destruction," and "while it will take hours to control the blaze, two of the towers have been saved."

Update: The main structure was saved but firefighters were unable to save the central spire and the majority of the 13th century oak roof was largely destroyed.

Update: The Rose Windows and the Great Organ both appear to be largely undamaged.

Update: The majority of the recovered artwork will be taken to storage facilities owned by the Louvre for restoration and protection.