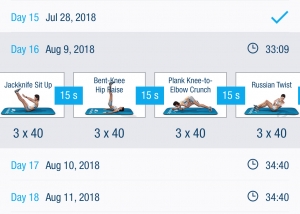 I knew MyPlate’s 10-minute abs workout wasn’t cutting it, and since purchasing my Fitbit Alta, I’ve tried stacking the MyPlate workouts, doing three in one sitting, combining the MyPlate workout with Fitbit Coach workouts, and lately, I’ve strictly completed my training plan on the Runtastic Six Pack app. Upon reaching Level 3 of the Runtastic Six Pack app training plan, I can confidently say that it is the best workout regimen for those in pursuit of six-pack abs.

I must have been in pretty good shape considering how easily I completed the Runtastic Six Pack app’s workouts at Levels 1 and 2. After completing 30 days of workouts increasing in difficulty, I entered Level 3 with confidence. All that confidence was undermined by Day 1 of my Level 3 training, but only by one exercise in the workout.

Level 3 Gets Easier, then Harder

By Day 5 of my Level 3 training regimen, I was back down to completing my workout in 27 minutes. I had cut out a considerable amount of recovery time between sets and was pausing my workout less and less. The harder exercises were coming more easily, and then Runtastic changed it up.

The change-up was actually easier for me than the first week of Level 3 training. Three of the four exercises were some variation of crunches, and crunches seem to be much easier for me than any plank exercises. That’s likely a result of me “cheating” myself of slow, controlled repetitions.

Plank exercises demand a controlled completion by design. The plank position is not one in which you can complete any movement very quickly. Crunches, however, can be completed quickly and form can go ignored at times, especially when you’re exhausted. Well, the pace at which I completed my crunches didn’t do me any favors when Runtastic changed up Level 3 again.

Day 11 of Level 3 training included three plank exercises and two types of crunches. This was the day I thought the app was broken or at least limited by its design. Day 11 of Level 3 training includes two sets of Thread the Needles going both to the right and left, but instead of alternating the sets and going to the right and then the left, the workout calls for two sets to the right then two more to the left. I found this to be painful for my forearms and elbows having to support my upper body weight in consecutive sets and felt I'd be better served alternating between right and left. I never did alternate the sets as to complete the training as indicated, but I asked Runtastic blog writer Hana Medvesek if this was a limitation of the app or included by design to work the same muscle groups consecutively, pain be damned. A reply was not provided as of this writing. Breaking up the right and left exercises would require the app to play different videos between sets, requiring a more complex design. But while alternating thread the needle exercises might be more comfortable for elbows and forearms, it might not have the same effect as working the same muscle groups consecutively. My suggestion would be to put some sort of padding under your forearm to ease the pain if you don’t have spongy carpet or a yoga mat.

The Second Half of Level 3 Tests Your Resolve

The 30-second recovery time between sets is cut in half on Day 16 of Level 3 training in the Runtastic Six Pack app, and the exercises are harder, too. As I was approaching the end of the Runtastic Six Pack app’s training regimen, I must admit I dreaded doing my workout. What was once a 25-minute workout had ballooned to a 47-minute workout that actually resulted in blood and sweat but no tears – just moans and groans from intense pain. The plank knee-to-elbow crunch exercises resulted in rug burns that made it difficult to complete workouts in consecutive days.

I actually took two days between workouts come Day 16 of Level 3 training because I was sore from my knees to my chest for two days. Obviously, cheating myself of slow, controlled completion of exercises had taken its toll. I was pausing regularly during sets and adding 30 seconds of recovery time between sets, especially for the plank knee-to-elbow crunch exercises.

By the third day of completing these exercises, though, I was down to adding the 30 seconds of recovery time solely after the second set of each exercise and between each set of the plank knee-to-elbow crunches. I had shortened my completion time from 47 minutes to 40 minutes, and was really starting to notice results.

Level 3 is not the End of the Game

Upon completion of workouts in the second half of Level 3, I could actually feel the definition of my six-pack abs with my hands when massaging my abs. I couldn’t see much more than a two-pack, but I could tell my goal of six-pack abs only required a bit more cardiovascular work to be realized.