How Republicans are using the 2020 census to their advantage 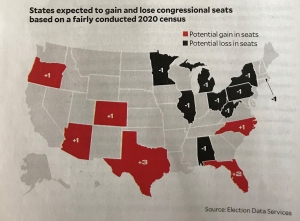 Just because Republicans relied on Russian interference to win the 2016 Presidential election doesn’t mean they’ve exhausted their means of winning elections. As of March 4, the federal government hadn’t spent a dime of the $120 million allotted to fight foreign election interference, according to The Hill. And according to The Nation, the Republican-majority Supreme Court has gutted the Voting Rights Act to provide 868 fewer places to vote, most in areas with strong minority populations. The United States Attorney General Jeff Sessions has even stifled voter registration efforts of minorities. But Republicans put all their eggs in winning the Presidency basket because it would allow them to use the 2020 census to their advantage.

Brookings Institution demographer William Frey projects that whites will become the minority in the under-18 age group in 2020 and that the white share of the population will fall under 60 percent for the first time. So if Republicans can’t convince minorities to support them, they have to do what they can to preserve the illusion that their base is not dwindling.

The census is more than just a means of determining America’s population and demographics. It determines the number of Congressional representatives and electoral votes states receive, how $675 billion in federal funding is allocated to states and cities annually for schools, public housing, roads and health care, and how states will redraw local and federal voting districts.

The citizenship question will scare immigrants from completing the census

The census is not a count of Americans, but a count of people residing in America. It is a count of American-born citizens and illegal immigrants alike. And while federal law prohibits the census bureau from sharing data with anyone, including Immigration and Customs Enforcement, most illegal immigrants don’t know that and are naturally afraid of completing the census. They are probably more aware that the Secret Service used census data to round up Japanese Americans and send them to internment camps during World War II, or that failure to answer a census question could result in a fine of up to $100. Immigrants should know that skipping the question won’t likely result in a fine, and your census response will be counted whether you answer the citizenship question or not. Instead, some immigrants actually up and move upon being interviewed, and Census Bureau data shows that undocumented immigrants are “hard to count.”

The state of California has the most to lose if a citizenship question is added to the census, which Commerce Department Secretary Wilbur Ross has already announced will be the case for the first time since 1950, citing the aforementioned Voting Rights Act as a reason for the addition. California and 13 other states are suing the federal government over the citizenship question in fear of losing federal funds and representation because of their large, foreign-born populations. According to Mother Jones, “California’s finance office estimates the state will lose $1,900 annually for each uncounted resident in 2020.”

Worst yet for California is that 20 percent of its residents live in hard-to-count areas, “where more than a quarter of all households failed to mail back their 2010 census forms, including a third of Latinos and African Americans.” California has 10 of the 50 counties in the country with the lowest census response rates -- home to 8.4 million people -- a population larger than that of 38 states, so you can see why the state is suing over the census citizenship question.

Republicans have cut funding for the 2020 census

With Donald Trump taking office, Congress cut the bureau’s budget another 10 percent and gave it no additional funding for 2018 -- a time the bureau generally receives a major budget boost to prepare for the census. Now the Census Bureau has half as many regional centers and field offices as it did in 2010, and the 2020 census will be conducted with 300,000 enumerators -- 200,000 fewer than in 2010.

At the same time 10 years ago, there were 120 Census Bureau employees; there are currently 40. And the $340 million promotional ad campaign for the 2010 census will likely go towards working out the kinks of the new technology replacing the boots on the ground.

The result of less funding is an investment in technology instead of people. For the first time, the U.S. census survey will be made available online in 2020. Instead of carrying clipboards, census enumerators will carry tablets, and regardless of the vulnerability of the 2020 census data to foreign interference and hacking, people will be missed, even with the increased availability an online survey provides. That is, if the software works. If the online census rollout is anything like the Healthcare.gov rollout, the 2020 census could be a complete disaster.

Planning and testing for the 2020 census has also taken a big hit by budget limitations. Field tests in Puerto Rico and on Native American reservations in North Dakota, South Dakota and Washington were cancelled last year, and two of three rehearsals planned for this April were also cancelled.

While traditional paper surveys will be mailed to 20 percent of American households that have poor internet access, “36 percent of African Americans and 30 percent of Hispanics have neither a computer nor broadband internet at home, and a Pew Research Center survey published last year found that more than a third of Americans making less than $30,000 a year lack smartphones,” according to Mother Jones. So people will be missed by the Census Bureau, and the people most likely to be missed are minorities.

How you can help make sure the 2020 census is accurate

You can help make sure the 2020 census is accurate by, first, filling out the census form. Whether you’re a legal resident of the United States, a foreign visitor with a temporary work visa, or an illegal immigrant, you should complete the 2020 census survey.

You can also make sure your neighbors complete the census by making them aware of the importance of the census, and that your community’s Congressional representation and federal funding depends on it. You can assure your foreign-born neighbors that census data won’t be shared with ICE or any other agency, and that skipping the citizenship question won’t disqualify your census response. You can also organize a series of census survey days at your local library so those without internet access or a home address can complete the 2020 census.

You don’t have to be a hired enumerator for the Census Bureau to make sure the 2020 census is accurate, but if you’re interested in serving as a census enumerator, follow this link. If you speak a second language, that would make you an ideal candidate in states with high immigrant populations.

The state of voter suppression in America

Suppressing the Student Vote in America

Young voters can sway elections, and the Republican-led New Hampshire Senate has passed a “poll tax” that will suppress student voting. The bill will likely pass the Republican-led House, but Republican Governor Chris Sununu doesn’t support the bill and could veto it. Regardless, the constitutionality of the bill has been called into question.

Now the New Hampshire law isn’t a “tax” in the exact sense of the word. Instead of forcing out-of-state students to pay a tax to access the polls, which would be unconstitutional, House Bill 372 allows the State of New Hampshire to impose fines on voters who do not have a New Hampshire driver’s license, even though it is legal to vote in the state with an out-of-state license.

The bill would impose two obligations on new voters. Within 60 days of registering to vote, a New Hampshire voter would need to register her car with the state and obtain a New Hampshire driver’s license, the cost of which could amount to over $200.

Suppressing the Minority Vote in America

Minorities have already been deciding elections in America, with black voters making the difference in Alabama. This is a major threat to Conservative incumbents, and Conservative-led, state legislatures have taken measures to suppress the minority vote in America.

Ohio’s law purging voters who have not participated in consecutive elections or failed to respond to a notice from state officials will likely be upheld by the Conservative majority of the Supreme Court.

While federal law doesn’t allow states to use failure to vote as a reason for purging voters from rolls, federal law also calls on states to keep accurate voter rolls and allows for removal when a person fails to respond to a state’s request to confirm registration and then fails to vote in two federal elections. Ohio sends a notice after a voter misses a single election, and removes said voter if they don’t reply. It’s the most aggressive law of its kind in America.

Redistricting All the Rage in America

With the 2020 census upcoming, the redrawing of states’ voting districts is getting a lot of attention, especially in the courts. Pennsylvania’s Supreme Court ruled 5-2 that its voter district map was partisan gerrymandered to benefit Republicans and must be redrawn.

Bills governing redistricting were introduced in 27 states in 2017. Here’s a complete list of those bills. What’s the reason for so much redistricting legislation? Well, 37 state legislatures have primary control of their own district lines, and 42 legislatures have primary control over the congressional lines in their state (including five of the states with just one congressional district). And why wouldn’t an incumbent legislator draw district lines to his or her advantage? That’s why organizations like Common Cause are having success campaigning for independent commissions to handle district drawing. All of the 27 states with pending legislation governing redistricting have bills calling for a commission separate from the legislature to handle the map-making.

For instance, in Minnesota, there are companion bills calling for independent commissions to handle redistricting. HF 246 and SB 2052 call for a commission of former judges to draw district lines, but objectors to the bills say former judges aren’t representative of Minnesota’s minority populations. In nearby Michigan, bills have been introduced mirroring California’s citizens’ commission for redistricting -- the favorite model of organizations working toward democratic, competitive elections.

So while the state of voter suppression in America is improving and bound to continue improving for voters, there will still be states where partisan gerrymandered districts result in undemocratic, noncompetitive elections in 2018 and 2020. And until every state gets redistricting out of the hands of incumbent legislators, free elections are an impossibility.