Opinion: In the poker game that is American capitalism, the white man is on tilt 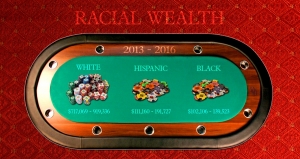 Income inequality grew in 2017 to the largest income gap ever recorded, but for roughly 200 years the white man was the only person at the poker table that is American capitalism. His chips were safe and regularly augmented along with a glass of lemonade by a slave who did the work responsible for the chip stack while his master played solitaire alone.

But when the white man’s first challenger arrived in the 1820s, he felt immediately threatened despite his massive chip stack and perceived mental and physical advantage over his opponent. White men were threatened by women entering the workplace because they’d work for less and advanced machinery made factory jobs easier for them to do. So when a white, American woman approached the poker table with her modest chip stack in hand, the white man went to work, teaching the white woman about American capitalism by using his superior stack of money to take hers. The white man didn’t take the white woman lightly, but he enjoyed her company and gave her enough time and just enough money to learn the game—opportunities not afforded his male opponents. When civil war broke out in the states the white woman’s chip stack grew considerably, and when slavery was abolished, more new players sat at the poker table that is American capitalism.

When a black, American man brought his meager chip stack to the poker table in 1865, the white man might have lost his means of subsidizing his stack, but he knew he could still steal chips from the black man as he did the white woman. And he did and continues to do so, but less often and at an ever-decreasing rate of success.

In 1910, the Mexican Revolution sparked a wave of immigration in the United States, but the first successful labor movement of immigrants in America took place in 1903, when Mexican and Japanese farm workers unionized. It was the first union to win a strike against the giant, California agriculture industry. Then the first wave of Asian immigration to the United States during the California Gold Rush in the 1950s brought more players to the table, each with a larger chip stack than the last. The white man gained another opponent to bully each player who dared sit at the poker table of American capitalism, but that window of opportunity grew shorter with each new player.

When your chip stack is bigger than everyone else’s, you don’t actually have to play poker, or any game for that matter, including the game that is the American economy. You just have to use your money to repeatedly force the poor to decide whether they’re ready to lose everything they have, and they seldom are regardless of the amount. That’s not poker; it’s old-fashioned bullying. The haves lean on the have-nots until they break, at which point the white man borrows them money to buy back into the game, with interest, of course.

The rules of both a poker game and a capitalistic economy cease to govern the gameplay when the majority of wealth is controlled by an extreme minority of players. The game has never been fair and still isn’t, but white, American men are scared anyway. While their chip stack hasn’t decreased significantly, there are more players at the table, and the white man fears there will be more coming for his ill-gotten gains. They can sense the table turning, which is why they’re expressing their anger more boisterously than in the past. They didn’t have much reason to complain while they were buying pots with busted, gutshot straight draws and suited connectors that found no similar suits nor connections amongst the community cards. The white, American man was probably only called and forced to show his cards once every few years in the poker game of American life.

Instead of observing the tendencies of his opponents and acting on them, the white man has resorted to bullying the rest of the table with his chip stack, over-betting the pot and forcing his opponents to either risk all their chips or fold. But it’s harder to buy pots with a dwindling chip stack, and the rest of the table has him figured now. The white man doesn’t have the chips to bluff with garbage cards anymore, and while he thinks he’s on a frozen wave of cards you read about, he’s really just scared of all the new action at the table. More players means more cards are out, too, so with every new player at the table, every hand becomes less and less valuable. But that doesn't make immigrants a threat; they can actually pad the chip stack of white, American men, too.

"Meat packing plants and lumber mills that rely on refugee employees need many more. Manufacturing and other industries across the country are looking to hire refugees." —Sasha Chanoff, USA Today

Immigrants work the jobs American men and women won't do, and they pay income taxes for doing them, and spend their income in the American economy, creating more jobs and more wealth for everyone. More players means more action, which means bigger pots and bigger swings of fortune. That worries the white man, as it should, because he's the only one who hasn't been playing poker these last 150 years or so.

White, American men have always been unreasonably angry, but how can you be mad after enjoying an economic advantage built on the backs of slave labor for over 150 years? White, American men tilted the economic playing field so much with slavery and ensuing racial discrimination that their advantage persists to this day. But they sense that advantage dissipating with every immigrant that arrives at the poker table of American capitalism, and that pisses them off, but not rightfully so. Simply being entitled to earning more money isn’t reason enough to be angry about that entitlement decreasing ever so slightly. Being the reason for providing that entitlement against your will, as black Americans were and continue to be (as well as women), is reason enough to be angry, and to be angry for however long the table is tilted in the white man’s favor.

Opinion: I don’t watch the NBA Playoffs for the same reason I despise American capitalism

Before the National Basketball Association (NBA) season began, almost anyone with any awareness of the NBA’s existence felt they knew which teams would be playing in each of the Conference Finals. Kyrie Irving and the Boston Celtics would meet LeBron James and the Cleveland Cavaliers in the Eastern Conference Finals, and Stephen Curry and Kevin Durant of the Golden State Warriors would play the Houston Rockets’ James Harden and Chris Paul in the Western Conference Finals.

That’s exactly how it turned out, minus Irving, who barring injury, would be suiting up against his former teammate in a Conference Final I’d actually watch. Now, I’ll wait to see if Houston can force a Game 7 against Golden State before tuning into the NBA Conference Finals, and it took me betting on Houston to win it all to even have an interest in that series. Basketball’s predictability is the very reason I prefer the Stanley Cup Playoffs.

Giant men wearing armor and wielding weapons in their hands and on their feet skate at immense speeds on an ever-changing playing surface chucking a rubber saucer at speeds even faster than their feet can carry them or baseballs are thrown while their opponents do all they can to get in front of that unpredictable projectile. Hockey is a most unpredictable sport, and that’s what holds my interest. The fact it hardly has any stoppages for commercial breaks, provides coaches with just one timeout, and requires live substitutions are all just big bonuses for the sport with the best postseason -- a postseason that can still be improved.

The NBA is also looking to improve its postseason, thankfully. Commissioner Adam Silver floated the idea of eliminating the conferences for the postseason and simply seeding the top 16 teams based on record. This would result in less chance of a lopsided NBA Finals series. For instance, the series most of us believe to be the actual championship series between Houston and Golden State would actually be played for the championship. Houston and Golden State would be the first- and second-ranked NBA playoff teams, respectively, and would only meet in the NBA Finals under the proposed postseason alteration.

The dominance and depth of the NBA’s Western Conference is forcing Silver to find a way to remedy the lack of intrigue in his sport’s predictable playoffs. A lack of competitiveness results in a loss of fans, which is exactly what has happened with elections due to partisan gerrymandering. Because elections have become so uncompetitive, fewer people vote, thinking their vote doesn’t matter, which, of course, is the intent of partisan gerrymandering.

The same is true of American capitalism. “Free” markets work for the consumer when there’s competition. But businesses want markets working for them. It’s why six companies own the majority of media in America or the means to deliver media messages. Hollywood called this “vertical integration” until the Supreme Court eventually forced movie studios to divest their interest in theaters.

But it’s happening again, and on a much more massive scale. Not only do media moguls own the media produced but the means of distribution. Comcast owns the “movies” it makes and the “theaters” that distribute them. The theaters are the cable, internet and mobile data arms of Comcast, so not only are they pulling revenue from ad sales of their shows, but they’re making two trips to the bank on just about every customer by being either one of two or the sole provider of cable, internet or wireless data in that customer’s area.

The increasingly deregulated capitalistic markets reward monopolistic businesses at the expense of the consumer. Mergers are great for big business, but they aren’t good for consumers. Sprint merging with T-Mobile would result in one less competitor in the mobile data and mobile phone markets, and with each fallen competitor the price for those services increases.

If you live in rural America you’re probably familiar with the price gouging that occurs because of a lack of competition, especially in the cable, satellite, internet service and mobile data industries. Verizon actually kicked Eastern Montana customers off their data plans because they used too much data. Many of those customers don’t have access to internet otherwise, so Verizon knows they’ll have to come back, and will pay more to do so.

So I don’t watch the NBA Playoffs for the same reason I despise American capitalism: a lack of competitiveness that results from monopolistic mergers, like Durant going to Golden State. Maybe when my Timberwolves actually win a playoff series I’ll give the NBA Playoffs my divided attention. But even with my Minnesota Wild eliminated from the Stanley Cup Playoffs, I have and will continue to watch the NHL postseason, because there’s no telling what could happen.