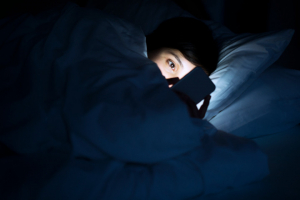 Two new cases of “smartphone blindness” has been described in the last month.   One case was a gentleman in China who was playing games on his phone at night and suffered a retinal artery occlusion or “eye stroke.” Another case was a woman in China, who was also playing on her phone at night but she sustained a bleed in her left eye.  Just as those who suffer from cerebral strokes, a “lack of blood flow” to the retina, or layer of the eye that helps create visual images, can be caused by a clot or hemorrhage.  Apparently these can be induced with excessive focusing and eye strain. This may result in temporary or permanent blindness.

Some people are being evaluated for stroke or transient ischemic attacks when they come to the ER complaining of recurrent “temporary blindness” after checking their smartphone in the dark.  This phenomenon, known as ‘smartphone blindness’, has been experienced by many of us when we have the sensation of dimmed vision or poor visual acuity, feeling punished for peeking at our email when we should be sleeping.

In 2016, doctors reviewed the cases of two women who experienced episodes of “temporary blindness”; as the ladies put their cell phones down, one eye could not see the cell phone for 15 minutes.  Their vision restored after this length of time.Doctors investigated the cases thoroughly with a variety of medical tests including MRI’s and couldn’t find the cause.

Finally they conclude these transient episodes of “vision loss” were harmless, in that one eye was being used to look at the phone and the other eye needed time to “catch up”.  When the women, as many of us do, check our phones, one eye is snugly closed and resting on a pillow while the other is available to look at the phone.  When the ladies would turn over, the closed eye didn’t have a chance to catch up to the increased brightness of the phone screen, hence having a dimmed view.

If one uses both eyes to look at the screen, this phenomenon does not happen.

Smartphone Blindness Studies Are Cause For Concern

Studies surfaced a few years ago where great lengths of smartphone use can cause retinal detachment.  In these cases the layer of the retina which focuses images, detaches from the back of the eye, causing serious vision loss.  Though there are treatments, if not treated early can cause permanent blindness in the affected eye since the retina loses its blood and oxygen supply when detached.  A woman from China had been using her smartphone for 2-3 hours in the dark each night when this occurs.

Smartphones have also been linked to myopia, nearsightedness and sleeping disorders as the blue light emitted from the screen can disrupt melatonin production.

A recent study found that 30% of adults spend more than 9 hours a day using their smartphone. Physicians recommend avoiding extended use, adjust settings to black text on white background, and with this recent case study, use both eyes to look at the screen when using the phone at night.

Increasing the size of the font helps your eyes since they don’t need to strain as much to read.  Try to look at your smartphone with a distance of 1 1/2 feet. Blinking often helps rest the eyes as well and keeps them lubricated and moist.

Additionally, avoid using the phone in the dark, but in a lit room.

Finally its good to use the 20,20,20 rule.  After every 20 minutes of use, look away at something 20 feet away for 20 seconds.  This may help avoid eye strain from excessive smartphone use.

Child may have gone “blind” from diet of mainly junk food 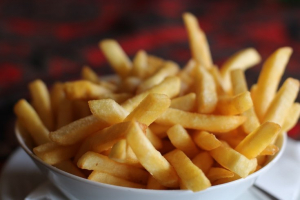 A case report in Annals of Internal Medicine describes a teen who went “blind” from a junk food diet.

A 14 year-old boy described as a “fussy eater” presented to his doctor with fatigue after years of eating meals rich in fries, white bread, chips and processed meat.  He was told to take supplements when they found him to be iron and B12 deficient but progressively over the next 3 years he began to suffer from vision loss.  Upon lab testing he was found to be deficient in iron, copper, selenium, Vitamin D and Vitamin B 12. And upon further testing was found to suffer from optic neuropathy.

He was further treated with supplements and now is under the care of specialists including nutritionists and eating disorder specialists.

His condition stabilized but reportedly he still has deficits such as blind spots  in the middle of his vision (central scotoma), rendering him “legally blind.”

This wasn’t the first case of nutritional optic neuropathy.

Above is a picture of the fundi of a 28 year-old male who suffered from central vision loss as a result of his diet which consisted of heavy alcohol use.  The progression of his disease has stabilized with intervention but he too has had to learn to adapt to his central scotoma.

Our eyes need vitamins such as A, a variety of B’s, C, E, and omega-3 fatty acids to name a few. Vitamin D is crucial for bone health and for protection against diabetes and cancer.

Most fast food is rich in carbohydrates, fats, salt and preservatives, and lacking in rich nutrients and amino acids.

So comes the question, are the majority of our youth “malnourished?”

Unless our children are eating diets rich is fruit, vegetables, whole grains, protein, dairy and health fats, they could be at risk of not receiving vital nutrition.

Vitamin supplementation helps but may not satisfy all the nutritional needs of a growing child. Hence in addition to the millions of children who suffer from malnourishment due to poverty, millions more are expected to suffer similarly as a result of poor diet choices.