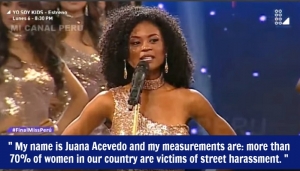 On Sunday, October 29th, the Miss Peru pageant was televised live to millions of homes in its native country. Beauty pageants are traditionally sexist and patriarchal and Peruvian audiences expected a typical affair. Let's face it, you pretty much know what you are going to get when you tune into a televised beauty pageant. But pageant organizer, Jessica Newton, herself a former beauty queen, didn't want anything to do with a  traditional affair, instead she wanted to use the enormously popular platform to highlight Peru's alarming record of gender violence.

And so Newton approached all 23 contestants, each of which agreed to abandon the traditional:

The women come onto stage wearing sequined shimmering mini-dresses and, one by one, step forward and reveal to the camera their full name, the location they represent and their bust, waist & hip size.

Instead they all overwhelmingly agreed to replace it with:

The women come onto stage wearing their mini-dresses but instead of listing off their measurements, each contestant offers vital statistics stating figures of violence against women in Peru.

And that's what they did. A sample:

“My name is Camila Canicoba and I represent the Department of Lima. My measurements are: 2,202 cases of reported femicide in the past year in my country.”

“My name is Karen Cueto and I represent Lima and my measurements are: 82 femicides and 156 attempted femicides so far this year.”

Eventual pageant winner Romina Lozano, said her “measurements” were “3,114 female victims of trafficking have been registered since 2014.”

And so on as each of the competitors came forward.

The entire pageant was designed to highlight gender violence up to and including the final round of the competition where, during the Q&A, the women were asked what sort of policy or laws could be changed that would combat gender violence and / or help the victims.

After the pageant, Susána Chavez, director of Promsex, a gender rights organization in Peru, told reporters:

"Unfortunately there are many women who (don't report abuse or assault because they)....  think they are isolated cases ... Now nobody can be indifferent to the level of violence ... These competitions focus on many stereotypes about women and judge them by their physical characteristics, but they (the pageants) impact a broad group of women and men that we do not reach. We've never seen a time when there is more awareness about the problem."

Here is a two minute clip of the pageant's highlights.