Gene's Technology Corner: More About the Business Case for the Mac 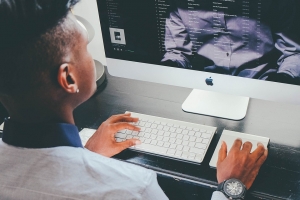 When I wrote about recent Apple partnerships with businesses, I only looked at part of the equation. There’s a lot more to report, but I’ll get to that shortly.

Now the closest look I had at the business case for the Mac was a company I worked at during the mid-to-late-1980s. It was a prepress shop, a descendant of traditional typesetting, which output clients’ jobs on a high resolution printing device from CompuGraphic. It was a close cousin to phototypesetting, based on similar output technology, but incorporating Adobe

PostScript for compatibility with documents created by our clients.

Despite the fact that the Mac started the desktop revolution, Microsoft still ruled the roost when it came to personal computers. In the days of MS-DOS, Macs were not taken seriously by most business. Point and click was not the way to do real work. Macs were just toys, or best used by artists and entertainers.

But I remember one important factor that cemented the dilemma of the PC user. I wanted to set up online chats with an office colleague, who used a PC. I used a Mac app, Microphone plus a modem, and I was able to set it up and begin to run terminal sessions in less than 15 minutes. The fellow at the office told me he was setting up a “shell” on his PC, and he’d have it working soon. Each day he’d tell me he was close. Just a few more things to do, and it would be ready.

Soon became never and he eventually left the company. I lost touch with him then.

Once Windows became useful enough for most work, Microsoft came close to killing the Mac. Software companies made Windows versions of their products. True, it was harder to set things up on a Windows PC, and maintaining those boxes was costlier than a Mac, even though the Mac cost more.

But the enterprise didn’t get the memo, at least not then.

Worse, Apple really didn’t pay attention to the business market except in the areas where the Mac first became popular. This situation existed more or less until the iPhone arrived. As hundreds of millions bought them, customers looked to Macs as a way to ensure a consistent experience within Apple’s ecosystem. Both the iPhone and the iPad had high business penetration percentages, and Apple provided the tools to help IT people to manage deployment of these devices quickly and safely.

In recent years, Apple has made notable conquests for Macs in the enterprise. As I reported previously, IBM made a deal to work with Apple to build special mobile apps, and even gave employees the option to use Macs instead of PCs. They also reported something Mac users have known all along, that a company saves hundreds of dollars per device due to the much lower support costs when they switch. It makes up for the differences in purchase price.

Many companies also allow their employees to bring their own devices (BYOD), which means that you don’t have to depend on what the IT person gives you. That has only added to Apple’s ability to chip away at Microsoft’s dominance.

According to published reports, such companies as Delta Air Lines and GE are now deploying Macs and iOS gear. Other adopters include Capital One, the financial company, Bank of America, Medtronic, Panera and even Walmart. Walmart? The New York City police have given up on Windows phones because Microsoft doesn’t support the platform anymore? They bought iPhones.

This is just the tip of the iceberg. But isn’t it curious that it’s taken the enterprise over 30 years to realize that Macs are cheaper to run and more reliable? We are in the twilight of the PC area, and Microsoft is no longer a dominant player in all markets it enters. The Windows Phone platform has failed miserably, and is basically history in the wake of Microsoft’s failed acquisition of Nokia’s handset division. Ask the former Nokia employees who got pink slips.

At one time the Mac’s market share had declined to what might be referred to as little more than a rounding error in some countries. It’s a lot better now, and when it comes to the mobile space, Windows Phone’s market share is a rounding error since it’s so low. It’s not that Nokia handsets were bad. They were, in fact, well reviewed, or maybe tech journalists cut them too much slack. Clearly customers weren’t buying.

iOS gear has clearly helped Apple make unexpected inroads into the enterprise. As companies bought iPhones and iPads, dumping PCs for Macs proved to be a fairly easy process, especially if a company used apps that are available on the Mac. Those that rely on Office should be able to move over without much trouble, although some less-used features might not have been brought over. It helps that Microsoft also offers credible versions of Office on iPhones and iPads.

As for apps that aren’t available in Mac versions, the ability to run Windows and other operating systems within virtual machines, such as Parallels Desktop, or via Boot Camp, completes the process. Running macOS and Windows side by side with great performance can clinch the deal.

This is, by the way, a key reason why Apple probably will not move the Mac to its custom ARM CPUs. The Mac platform has grown considerably since the switch to Intel. So why switch?

Now when I recall my Mac experiences of 30 years ago, I hardly expected it would take all these years for businesses to take them seriously. But it’s better late than never.