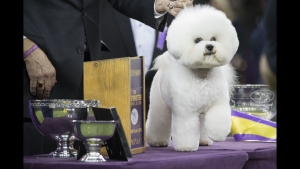 The surprise “best in show” winner at the 142nd Westminster Kennel Club Dog Show is Flynn, a bichon frise. A surprise pick too as, according to The Associated Press, "Fans who had been loudly shouting for their favorites fell into stunned silence when judge Betty-Anne Stenmark announced her choice." Well played, little underdog Flynn!

There were almost 3000 competing dogs representing 200+ breeds but it was little fluffy Flynn that brought home the purple ribbon. The other winners, by breed:

Since 1877! That means the Westminster Dog Show is older than Shredded Wheat, automobiles, stop signs, bottle caps and zippers!

Also, according to Sports News, “The first show consisted of just gun dogs by a group of hunters who met regularly at Westminster Hotel. Original prizes for winning the show varied, with one such reward being pearl-handled pistols.”

And for some reason the Westminster Dog Show has traditionally, and heavily  - favored terriers, who have won best in show 46 out of the 103 times the prize has been given since 1907 with male dogs winning 71 times.

Finally, dog shows are not without their controversy. Some animal activist groups don’t like dog shows and want them banned. The major concerns revolve around negative breeding practices, which certainly happen; and the fact that the dogs, when going through the grooming process can be jostled around too much in ways that might make them uncomfortable.

This seems to be a fair argument but I doubt dog shows will be “banned” anytime soon. Furthermore, I suspect the overwhelming majority of dogs within said shows are lovingly handled and cared for. Perhaps, additional common sense care requirements can be implemented to weed out some of the more ridiculous grooming practices (like - dog eyeliner).

Other than that, dog shows are extremely popular and are here to stay. So if you find yourself organizing or participating in a dog show - keep those canines healthy and happy.

And they’ll do the same for you.