Death by protein supplements: What is Urea Cycle Disorder? 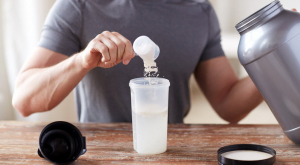 In 2017, a 25-year-old mother of two died after over consuming protein supplements in preparation for a bodybuilding competition, and her mother is speaking out on the potential dangers that many athletes face.

Unbeknownst to her, she suffered from Urea Cycle Disorder (UCD), such that when she consumed protein shakes and supplements she overproduced a toxic byproduct.

What is Urea Cycle Disorder?

People with Urea Cycle Disorder (UCD) have a mutation that causes them to lack an enzyme that helps break down ammonia.  The urea cycle is responsible for removing ammonia from the bloodstream. Ammonia is made by cells, when they breakdown the nitrogen in proteins.  Ammonia needs to be eliminated, and through this cycle turns in to urea which can be excreted in the urine.  If a step is missing, ammonia and nitrogen products build up causing hyperammonemia.  This can cause liver and brain damage and eventually death.

What are the symptoms of Urea Cycle Disorder?

If one suffers from hyperammonemia, a result of UCD, the following symptoms may manifest:

UCD cases are rare with 1 UCD patient per 35,000 births. According to the National Urea Cycle Disorders Foundation, “Because many cases of urea cycle disorders remain undiagnosed and/or infants born with the disorders die without a definitive diagnosis, the exact incidence of these cases is unknown and underestimated. It is believed that up to 20% of Sudden Infant Death Syndrome (SIDS) cases may be attributed to an undiagnosed inborn error of metabolism such a urea cycle disorder. Some children with autism spectrum and behavioral disorders may have undiagnosed urea cycle disorders.” Treatment includes stopping the excess protein/nitrogen intake, fluids, medications, dialysis and at times, liver transplantation.

So do we need to fear protein supplements?

No.  But what we need to remember is if we are increasing our protein, and many times accurately, for bodybuilding, we need to realize that our bodies, including our kidneys, may not be on the same page.  When this happens, protein supplements can be dangerous so competitive athletes, or others using protein supplements, should be supervised by their health provider.