As Nancy Reagan would say, "Just Say No" - to the moronic Democrats

I got a lot of phone calls last week from the many people who have one of my numbers, not about the content but about the word I used to describe the House Democrats.  Retards.

Frankly, it was the only printable term I could think of at the time.

I certainly mean no disrespect to those who have, what we call today, learning disabilities.  Even the thought of comparing any of those folks to the vast majority of House Democrats—who are just plain stupid and unpatriotic—places an innocent person with a low intelligence quotient in a bad light and I certainly don’t wish for that.  You see, a person with learning disabilities, a low IQ and other issues can usually go on to live a good life and become a productive member of society.  They just have to work at it.  And many—if not most—of them do.

Not so much for the House Democrats who participated in the impeachment scam.

They and their faux leader are just plain stupid.  As we say in rural America, dumb as a box of rocks.  Also, mean.

Want to know how stupid?

Here’s a guy who is real proud of his business experience as long as he doesn’t specifically tell the lefties whose vote he is courting exactly what that experience is.  The truth is he got rich the same way a lot of people do—private equity and hedge fund management.  You know those private prisons which ICE uses.  His funds invested early.

Yet he calls President Trump, who got rich building things, a “criminal in the White House”.

Also, he says that climate change is the biggest problem we’re facing.

As Kellyanne Conway would say, that’s a load of crap.  To put it in the words of the late George Carlin, “The planet has been through a lot worse than us. Been through earthquakes, volcanoes, plate tectonics, continental drift, solar flares, sun spots, magnetic storms, the magnetic reversal of the poles … hundreds of thousands of years of bombardment by comets and asteroids and meteors, worldwide floods, tidal waves, worldwide fires, erosion, cosmic rays, recurring ice ages … And we think some plastic bags and some aluminum cans are going to make a difference? The planet isn’t going anywhere. WE are!”

But people will get rich on the hysteria.  And guys like Steyer think that’s enough to get them elected President.

When he was Vice President to Barack Obama, his portfolio included the Ukraine.  Yet he doesn’t understand why his neer’do well son, Hunter, suddenly popping up with a huge paying job with a suspicious Ukrainian gas company raises any red flags at all.

Where do these people come from?

Well, trust me, it’s NOT like they are inspired by the concept of public service.  Many if not most of them simply look down on their fellow Americans.  They are under the misapprehension that we are too stupid to live our lives without their divine intercession.  They also like the money and the notoriety.

That’s where the Adam Schiffs, the Eric Swalwells and, God help us, the Alexandria Ocasio-Cortez’ come from and they will decide they have what it take to be the top dog soon.  (Swalwell already has.)

What can America do?

To quote Nancy Reagan, “just say no” .   These folks may be worse than street drugs.  And the media will drop them like a hot rock if they lose a few elections.  The media may have its favorites, but at the end of the day, it’s a business.  No ratings, no money goodbye AOC and friends. 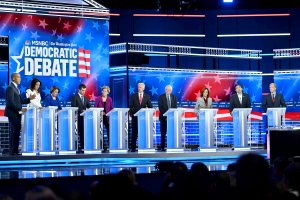