Displaying items by tag: The Apostles

Because our forefathers did not submit to tyranny 243 years ago, Americans still have the freedom today to right wrongs! 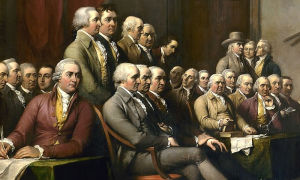 “What country can preserve its liberties if their rulers are not warned from time to time that their people preserve the spirit of resistance? Let them take arms.  The remedy is to set them right as to facts, pardon & pacify them. What signify a few lives lost in a century or two? The tree of liberty must be refreshed from time to time with the blood of patriots & tyrants. It is its natural manure.” –President Thomas Jefferson

“Liberty is the right to do what the law permits.” - Charles D. Montesquieu-Exodus 20

If you are tired of man’s ten thousand commandments, then get back to God's Ten (Exodus 20).

In making a distinction between licentiousness and liberty, Fisher Aimes, the architect of the First Amendment, set the record straight by stating:

“…Licentiousness (Un-restrained by Law or Morality) which the ambitious call, and ignorant believe to be liberty.”

As America’s treacherous politicians are doing their best to undo what our forefathers established through a clear violation and transgression of their sworn oaths (1 John 3:4), it is amazing to see the number of people in this country today that are willing to submit (Deuteronomy 28:68) to the tyrannies that our forefathers had taught us, by their examples, to resist and to throw off.

Because King George III did not submit to the Lord (Deuteronomy 17:15-20) in his administration and obligations as God’s magistrate towards men (Romans 13:4), our forefathers opposed him.

John Hancock, first signer of the Declaration of Independence said, “Resistance to tyranny becomes the Christian and social duty of each individual… Continue steadfast and, with a proper sense of your dependence on God, nobly defend those rights which Heaven gave, and no man ought to take from us.” (History of the United States of America, Vol. 2 p. 229)

The Declaration of Independence...

The history of the present King of Great Britain is a history of repeated injuries and usurpations, all having in direct object the establishment of an absolute Tyranny over these States. To prove this, let facts be submitted to a candid world.

He has refused his Assent to Laws, the most wholesome and necessary for the public good.

He has forbidden his Governors to pass Laws of immediate and pressing importance, unless suspended in their operation till his Assent should be obtained; and when so suspended, he has utterly neglected to attend to them.

He has refused to pass other Laws for the accommodation of large districts of people, unless those people would relinquish the right of Representation in the Legislature, a right inestimable to them and formidable to tyrants only.

He has called together legislative bodies at places unusual, uncomfortable, and distant from the depository of their Public Records, for the sole purpose of fatiguing them into compliance with his measures.

He has dissolved Representative Houses repeatedly, for opposing with manly firmness his invasions on the rights of the people.

He has refused for a long time, after such dissolutions, to cause others to be elected, whereby the Legislative Powers, incapable of Annihilation, have returned to the People at large for their exercise; the State remaining in the meantime exposed to all the dangers of invasion from without, and convulsions within.

He has endeavoured to prevent the population of these States; for that purpose obstructing the Laws for Naturalization of Foreigners; refusing to pass others to encourage their migrations hither, and raising the conditions of new Appropriations of Lands.

He has obstructed the Administration of Justice by refusing his Assent to Laws for establishing Judiciary Powers.

He has made Judges dependent on his Will alone for the tenure of their offices, and the amount and payment of their salaries.

He has erected a multitude of New Offices, and sent hither swarms of Officers to harass our people and eat out their substance.

He has kept among us, in times of peace, Standing Armies without the Consent of our legislatures.

He has affected to render the Military independent of and superior to the Civil Power.

He has combined with others to subject us to a jurisdiction foreign to our constitution, and unacknowledged by our laws; giving his Assent to their Acts of pretended Legislation:

For quartering large bodies of armed troops among us:

For protecting them, by a mock Trial from punishment for any Murders which they should commit on the Inhabitants of these States:

For cutting off our Trade with all parts of the world:

For imposing Taxes on us without our Consent:

For depriving us in many cases, of the benefit of Trial by Jury:

For transporting us beyond Seas to be tried for pretended offences:

For abolishing the free System of English Laws in a neighbouring Province, establishing therein an Arbitrary government, and enlarging its Boundaries so as to render it at once an example and fit instrument for introducing the same absolute rule into these Colonies

For taking away our Charters, abolishing our most valuable Laws and altering fundamentally the Forms of our Governments:

For suspending our own Legislatures, and declaring themselves invested with power to legislate for us in all cases whatsoever.

He has abdicated Government here, by declaring us out of his Protection and waging War against us.

He has plundered our seas, ravaged our coasts, burnt our towns, and destroyed the lives of our people.

He is at this time transporting large Armies of foreign Mercenaries to compleat the works of death, desolation, and tyranny, already begun with circumstances of Cruelty & Perfidy scarcely paralleled in the most barbarous ages, and totally unworthy the Head of a civilized nation.

He has constrained our fellow Citizens taken Captive on the high Seas to bear Arms against their Country, to become the executioners of their friends and Brethren, or to fall themselves by their Hands.

He has excited domestic insurrections amongst us, and has endeavoured to bring on the inhabitants of our frontiers, the merciless Indian Savages whose known rule of warfare, is an undistinguished destruction of all ages, sexes and conditions.

In every stage of these Oppressions We have Petitioned for Redress in the most humble terms: Our repeated Petitions have been answered only by repeated injury. A Prince, whose character is thus marked by every act which may define a Tyrant, is unfit to be the ruler of a free people.

Nor have We been wanting in attentions to our British brethren. We have warned them from time to time of attempts by their legislature to extend an unwarrantable jurisdiction over us. We have reminded them of the circumstances of our emigration and settlement here. We have appealed to their native justice and magnanimity, and we have conjured them by the ties of our common kindred to disavow these usurpations, which would inevitably interrupt our connections and correspondence. They too have been deaf to the voice of justice and of consanguinity. We must, therefore, acquiesce in the necessity, which denounces our Separation, and hold them, as we hold the rest of mankind, Enemies in War, in Peace Friends.

We, therefore, the Representatives of the united States of America, in General Congress, Assembled, appealing to the Supreme Judge of the world for the rectitude of our intentions, do, in the Name, and by Authority of the good People of these Colonies, solemnly publish and declare, That these united Colonies are, and of Right ought to be Free and Independent States, that they are Absolved from all Allegiance to the British Crown, and that all political connection between them and the State of Great Britain, is and ought to be totally dissolved; and that as Free and Independent States, they have full Power to levy War, conclude Peace, contract Alliances, establish Commerce, and to do all other Acts and Things which Independent States may of right do. — And for the support of this Declaration, with a firm reliance on the protection of Divine Providence, we mutually pledge to each other our Lives, our Fortunes, and our sacred Honor. Hebrews 13:7

President Thomas Jefferson (1 of the 5 architects of the Declaration of Independence) also said: “Resistance to tyrants is obedience to God.”

What about the fathers of the faith (Hebrews 11)?

If you have read your Bibles correctly, you must then remember that Moses, the meekest man alive, refused to submit to the Pharaoh by confronting him, as well as commanding him to let the Lord's people go (Exodus 8:1).

After the death of Moses, Joshua was then ordained to bring the children of Israel into the Promised Land by dispossessing the corrupt kings of the land (Joshua 10:16-43).

What about Gideon throwing off the oppressors and their Kings? Judges 8:1-9

What about Samson, again throwing off the Philistines? Judges 16:23

What about Saul and the Philistines? 1 Samuel 14:52

What about David’s victories over the corrupt kings? 1 Chronicles 18

What about Elijah confronting King Ahab and Jezebel on Mount Carmel? 1 Kings 18:16-45

What about Nehemiah and Sanballat and Tobiah? Nehemiah 4

Jeremiah was appointed to confront the powers that were found in Jeremiah 17:19. What was Jeremiah confronting? Corruption!

You must remember the account of Shadrach, Meshach and Abednego, where they all refused to bow down to Nebuchadnezzar and his golden image.  Because they did not bow, they did not burn and the country was converted to the Living God (Daniel 3).

What about Amos who confronted corruption within both entities of Church and government? Amos 5:12; 7:10

What about Jonah who was commanded by the Lord to go to Nineveh to preach repentance to that nation? Starting from the top to the bottom, they were commanded to repent (Jonah 1:2).

Because John obeyed the Lord and confronted the corrupt king, he taught the people a lesson about what their duties were before God and man (Luke 3:19). In the end, John was decapitated and was liberated in the presence of the Christ whom he loved.

In extreme cases, where the powers that rule were in full force against the children of God, the Lord would even send angels to break them out of prison (Acts 12:5-17).

Paul and Silas, while praising God, experienced an earthquake that would loose them and set them free (Acts 16: 25-26).

Speaking of those who have gone before we look to the price that was paid to liberate us through their sacrifices (John 15:13).

Such was the fate of the apostles, according to the traditional statements.

It is important to remember that every apostle of Christ, except John, was killed by hostile civil authorities that opposed God's government.

Christians have been imprisoned, tortured, or killed by civil authorities for refusing laws that contradicted the Lord's.

I end with a question: What if our forefathers would have submitted to tyranny the way that their posterity has in the present? We would not have the freedom to stand up and right wrongs the way that we still can today.