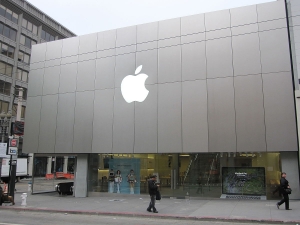 To understand what the Apple Store meant to me, let me tell you a personal story. In the 1960s, I had a hobby, building radio and general audio gear. Some of it I bought for myself, others I assembled for friends — at no charge. Well, I was a teenager, living at home. I wasn’t rich, but I had a tape recorder and a radio and a mic, so I was mostly happy.

In those days, I made periodic trips to one of the early consumer electronics stores, Lafayette Radio. After going bankrupt in 1980, its assets ended up in the hands of the company that eventually became Circuit City.

After moving to the Phoenix area in 1993, I shopped occasionally at a local Circuit City, but mostly for CDs. If I wanted a new Mac, I went online and saved money. It’s not that Circuit City didn’t carry Macs. They had some, and I remember visiting the retailer a few years later and seeing a few dusty models placed haphazardly on a single display table off to the rear

somewhere. Most had been left off. The few that were running mostly displayed a Hypercard slide show that didn’t really entice anyone to buy anything.

Besides, the salespeople were busy encouraging you to check out the real center of the action, the PC tables.

I recall a report some time later, about Steve Jobs admonishing Apple dealers to give Macs a fair shake. Make that demanding in very raw language. It was, after all, vintage Steve Jobs.

Apple finally decided to go its own way, by establishing its own retail chain. Jobs recruited former Target retail executive Ron Johnson to help him design the new stores.

When the first two Apple stores had their grand openings in 2001, in Glendale, CA and Tyson’s Corner, VA, the tech pundits were skeptical. Other electronics manufacturers, including Sony and Gateway, launched chains of branded stores, but they really didn’t go anywhere.

In large part, it’s because they were just ordinary retailers, only focused on a single brand. So why go to one when you could get the very same merchandise at the same price — or less — at a store with a far greater selection?

Apple’s approach was to customize your shopping experience with a specialty boutique with what appeared to be a remarkably noncommercial approach to retail sales. For one thing, you weren’t confronted with greedy salespeople trolling for a sale. Indeed, nobody pushed you to buy anything, or even to leave if you just wanted to just hang out.

If you had a problem with your Apple gadget, there was the Genius Bar where you could get advice, or authorized repairs by a factory trained specialist.

As a contributor to the Arizona Republic, and later Gannett and its national newspaper, USA Today, I attended two of the openings in the Phoenix area. At the Chandler, AZ Fashion Center, I met  Johnson, then Apple’s retail chief. I also got an Apple Store T-shirt.

I remember the opening ceremony, where the newly-minded employees welcomed customers with loud rounds of applause.

In 2002, I received a VIP invite to attend the grand opening of an Apple Store in New York’s SoHo district. I was part of an exclusive group that included Apple executives, even Steve Jobs and Phil Schiller, fellow tech reporters and a smattering of show business types.

While there, I had a chance to speak with Jobs for a few moments before he pulled his usual stunt to end a conversation, which was to walk away in mid-sentence. But I also spent several minutes speaking with the comic actor Tim Allen, who starred in one of my favorite movies, “Galaxy Quest.”

Recalling that the film ended in a way that a sequel might have been filmed, Allen said that one key factor that hurt the effort was a motorcycle accident that actor Daryl Mitchell, who portrayed the starship’s navigator, suffered the previous year. The mishap left him paralyzed from the waist down. Despite the handicap, by the way, Mitchell has remained active in show business. These days, he’s a featured player in a hit CBS series, “NCIS: New Orleans.”

But there’s still hope for a “Galaxy Quest” revival on Amazon, despite the 2016 death of Alan Rickman, another star of the cult classic.

Now my feelings about the arrival of the Apple Store in the Phoenix area were mixed. Before they arrived, I made a decent income as a Mac consultant. But Apple could provide much of what I offered, at least to people who didn’t mind carrying their gear to the store, at no charge. It didn’t take long for most of my clients to choose the obvious alternative, even when I lowered my hourly rates.

At first I focused on older gear, mostly Macs that were too old for Apple to provide direct support. As my customers grew older, however, that business mostly faded.

Despite my bittersweet feelings about the matter, I do get to an Apple Store from time to time to check out the new gear. Overall, the shopping experience remains mostly good, but the Genius Bar is often overwhelmed, so you have to reserve a session before you pay a visit.

As to Ron Johnson, he finally left Apple and went on to JCPenney to overhaul the shopping experience over there. But it proved to be a poor fit, and Johnson departed after the struggling retailer’s situation only worsened from his attempts to move them upscale. These days he’s connected with Enjoy, a startup that hopes to overhaul the shopping experience.