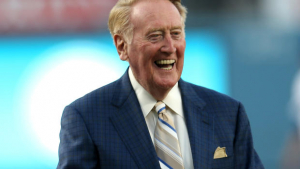 Monday, April 4, 2016, the greatest sportscaster ever began his 67th and final season.

Don’t take the word of two life-long Dodger fans that 88-yearold Vin Scully, the Voice of Da Bums since 1950, is the best. His awards and recognitions are way too numerous to list, so here are the greatest highlights. The American Sportscasters Association named him Sportscaster of the Century in 2000 and first on its all-time Top- 50 list later. Numerous halls of fame, a star on Hollywood’s Walk of Fame, etc.

The reasons for that extend from his encyclopedic knowledge of the game and technical broadcasting skills to his modesty, casual friendly manner, and personal warmth, all conveyed in a lyrically descriptive style via a dulcet voice. His vivid yet simple description of a game has thrilled fans for years.

It all starts with his signature introduction: “It’s time for Dodger baseball! Hi, everybody, and a very pleasant good day/evening to you, wherever you may be.”

When the Dodgers moved to Los Angeles in 1958, fans began bringing their transistor radios to the ballgame because he added so much to what they saw. Part of his charm is his mastery of baseball history and anecdote, which makes fans feel a special connection to him and the game.

He learned early on to be objective and understated, not a home-team shill and loud. And he always kept in mind that sportscasting is about the players and the game, not about him.

He’s witnessed more spectacular sports history moments than anyone. He was there (but not calling the action) for baseball’s most famous moment ever, Bobby Thomson’s pennant-winning “shot heard ‘round the world” homerun in 1951 for the Giants that broke Dodger hearts forever.

Four years later, he called the seventh game of the Dodgers’ first World Series championship ever, which Scully recalls as his favorite moment. On the last out, he said simply, “Ladies and gentlemen, the Brooklyn Dodgers are the champions of the world.” Then he turned the mic to the cheering crowd for an extended time in what became another signature move.

He explains that as an eighty year-old boy, he used to lay his head on a pillow under the large radio counsel in his parents’ home and let the sounds of the crowd and the game wash over him as ate crackers and drank milk. That memory comes back at every good baseball moment, and that’s what he shares with fans.

Did we mention that he called “The Catch” on TV in 1982, when the San Francisco 49ers’ Joe Montana and Dwight Clark beat the Dallas Cowboys and started a dynasty? Yes, he’s great at television, too, plus football, golf and tennis broadcasting.

Vin Scully used that dulcet voice to push the sun back up in the sky for one more summer for all of us. 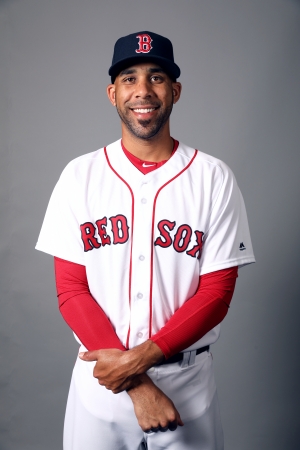