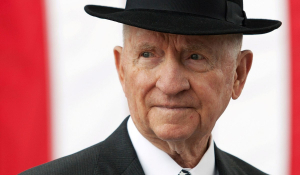 His legacy, however, is embodied in every American who ever took a risk and either succeeded or failed.

Perot was largely successful.  He started Electronic Data Systems with $1000 and experience at IBM as a salesman fresh out of the Navy.  In 1984, he sold it to General Motors—the least entrepreneurial company in the United States—for $2.5-billion dollars.  He got a seat on GM’s board and became its biggest shareholder.

That’s when the fireworks started.

Perot wanted GM to make better cars.  He soon found out that GM Chairman Roger Smith regarded EDS as a shiny new thing.  “At EDS when we see a snake we kill it. At GM they appoint a committee to study snakes,” was Perot’s comment.

Smith soon had enough and the company coughed up another $750-million to get rid of the Texas provocateur once and for all.

What GM didn’t get was a non-compete agreement.  Perot soon started Perot Systems which was bought by Dell in 2009.

One other thing about Perot was important.

Being from Texas, he never lost touch with Middle America.  No matter how rich he became, he never stopped being the guy from Texarkana whose Daddy was a cotton trader.  He always understood that between the east coast and the west coast was a majority of Americans who worked hard, played by the rules and he had immense respect for us.

I remember meeting with him one day when I owned radio stations in Tulsa and he spent quite a bit of time quizzing me about the radio business.  He was interested in just about everything.

What he never appeared to be much interested in was his legacy.

His legacy will be huge because he lived a huge life well.

His last, most Perot-like quote was this:

“Texas born, Texas bred and when I die I’ll be Texas dead.”

If God, ever needs a Texas poet-laureate, He won’t have to look far.