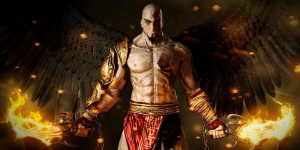 God of War continues to kill all competitors for end of the year game awards. As of yet GoW has taken home Best Studio Game Direction / Best Action/Adventure / Best Game at the The Game Awards, it’s won an Achievement in Game Writing from the Writers Guild of America, and now it’s swept all the major awards at BAFTA (The British Academy of Film and Television Arts) which is arguably known as the most prestige game award ceremony.

God of Wars swept the five top prize at the BAFTA, winning for Audio Achievement, Best Music, Performer (Jeremy Davies), Best Narrative and Game of the Year. The only other year BATFA handed out that many top prizes to a single game was back in 2014 when The Last of Us won for Audio Achievement, Story, Performer (Ashley Johnson), Action/Adventure and Game of the Year. Which, looks to be similarly what God of War took home this year. And since I LOVE The Last of Us, I think it’s high time I gave God of War a chance, too.

As for some of the other big stories at the BAFTA: Rockstar’s heavily favored Red Dead Redemption 2 lost in all six of the categories it was nominated. Microsoft Studios’ Forza Horizon 4 was named best British game, Lucas Pope’s Return of the Obra Dinn (unplayed by me) took home Artistic Achievement and Game Design, while Subset Games’ Into the Breach was named Best Original Property (also unplayed by me but now I’m totally interested!). Annapurna interactive Florence wins Best Mobile Game. And by the way, Florence is a very well done slice of life about the “possibilities in vs. the realities of” falling in love. Florence is very lovely, and very heartbreaking. I suspect adults will get far more out of it than kids. But, on the other hand - the kids will love Gods of War, so it all works out. Just sayin. And, despite just having English parents and leaders proclaim that Fortnite is too addictive (and that - someone should do something about that!), Fortnite takes home the BAFTA for Best Evolving Game.

Which, to be fair - Fortnite could be both, right? I mean it could certainly be a great Evolving Game and also be very addictive. Of games can be addictive. You know why? They’re fun to play! If the game wasn’t fun to play it would be a bloody failure of a game!

Anyway, I don’t entirely buy into the recent WHO Gaming Disorder Classification, which parents are trying to use to ban their kids from all games ever. But, even in the actual WHO classification it says:

“Studies suggest that gaming disorder affects only a small proportion of people who engage in digital- or video-gaming activities. However, people who partake in gaming should be alert to the amount of time they spend on gaming activities, particularly when it is to the exclusion of other daily activities, as well as to any changes in their physical or psychological health and social functioning that could be attributed to their pattern of gaming behavior.”

Basically, they're saying, “Um, yeah - well, not many … and by “not many” we mean “hardly any gamers at all, ever” will actually have gaming disorder. But, you know - just watch out for how much you play and maybe do other things once in a while.

Fair enough. But then, do you really need to classify it as a "disorder?" *shrugs*

For more about "Gaming Disorder" check out a 2017 article I wrote: The “Gaming Disorder” Dilemma: Game Violence, Obsession and Addiction.