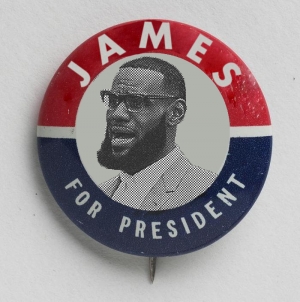 A high-school-educated athlete who missed 83 days of school in fourth gradeserving as President of the United States isn’t as far-fetched as it might have been prior to the 2016 Presidential Election. If Donald Trump has instilled anyhope in the everyday American, it’s that they too can be President someday. George W. Bush had the same effect, but neither were self-made men.

LeBron James, however, is the American Dream incarnate. He went from rags to riches and didn’t even need a loan from his father to do so. In fact, he did it without his father entirely, and that is more representative of an upbringing in everyday America these days, making him more in tune with the everyday American than most politicians have ever been. The question isn’t whether LeBron James is qualified to be President; it’s when he’ll run and win.

Upon opening the “I Promise” public school James gifted to his hometown of Akron to serve at-risk youth in grades one through eight, James has been drawing the attention of the President and the support of a lot of people. As of this writing, more than 40,000 people have signed a Care2 petition calling for James to replace Secretary of Education Betsy DeVos.

While a select few have criticized James for leaving Ohio taxpayers with a $6 million annual tax bill to run the school, Ohio taxpayers aren’t actually paying an additional $6 million per year in taxes. They pay the annual budget for public schools regardless of James’s I Promise school being open or not. If anything, James is lowering their tax burden by $2 million annually and saved his hometown taxpayers from having to pass a school bond to fund the $2 million in repairs and renovations the school required.

Even if he wanted, James’s Family Foundation couldn’t lawfully pay the entirety of the public school’s $8-million annual budget without it becoming a private school, which wasn’t James’s intent. While James attended a private high school, it wasn’t because his mother could afford it. It was because LeBron could ball. James built a public school to serve his people — poor people.

Trump, on the other hand, “built” Trump University, a for-profit, education company that defrauded “students” of both money and an education, costing Trump $25 million to settle lawsuits brought against the “university.” Meanwhile, James spent $41.8 million to send 1,100 Akron students to college.

James showed just how smart and Presidential he is by not responding to the President’s not-so-Presidential tweets after opening the I Promise school. James’s disacknowledgement of Trump’s diss got a rave review from his contemporary in the NFL, Aaron Rodgers, calling it “absolutely beautiful.”Perhaps James is going to let his game and three-part, Showtime docu-series, Shut Up and Dribble serve as his response to the President’s “shut up and dribble” attitude in October.

Trump’s sentiment is a popular one amongst his base, who seemingly want their reality, television entertainment devoid of reality and their reality, television entertainers devoid of humanity. They want live-action, propagandic cartoons that let them ignore the injustices in their country and world, not documentaries drawing attention to those injustices. They and their President seem to be in the minority, though.

The President’s approval rating dropped from 41 to 39 percent in the week following his Twitter attack on LeBron, and while that decline could be a result of just about anything the President has said or done of failed to say or do, it’s worth noting because it’s the lowest Trump’s approval rating has been since April. Trump’s all-time low approval rating is 35 percent, and he’s never been approved of by a majority of Americans, according to Gallup. Trump entered office with an approval rating of 45 percent in 2017.

Back in 2016, a Seton Hall Sports Poll found that 53 percent of 762 adult respondents approved of James, and that was before he won a championship for Cleveland. So it’s apparent that Trump’s and James’ approval ratings are moving in opposite directions.

To run for President, you must be born in the United States, retain a residence in the United States for 14 years and be at least 35 years of age. That’s it. An advanced degree nor any college degree is required of a Presidential candidate. The only college that matters is the Electoral College. On Dec. 30, 2019, LeBron James will be officially eligible to run for President, and everything he’s done has properly prepared him for running a successful campaign as a Democrat in 2020 or beyond.

Think about it. James is a native of Ohio, one of the most important swing states in the nation and one of the best predictors of the eventual winner of U.S. Presidential Elections. No Republican candidate has ever won the Presidency without winning Ohio, and no Republican is going to win Ohio in a race against King James. That’s 18 electoral votes that went to Trump going to James and the Democrats in 2020. If James wins the same states Hillary Clinton did in 2016, he would need just 20 electoral college votes to win the Presidency after Ohio, and he gets them in Florida.

James’s career in Miami, including back-to-back championships and four consecutive Finals appearances should swing the state and its 29 electoral votes from Trump to the Democrats in 2020. Boom, King James is President James in 2021. He’ll just be Presidenting while playing professional basketball for the Los Angeles Lakers instead of golfing alone. Or...

When We Could Reasonably Expect President LeBron

James has said he wants to play on a basketball team with his son, and unless the NCAA changes its rules regarding “amateurism” and college eligibility (or the NBA changes theirs), his son will have to be 19 years old or so. That’s in six years, when his dad will be 39. So if LeBron intends to play until he’s, say, 42, he’d be free to focus all his attention on the country in 2028 — an election year.

If James doesn’t have political aspirations, he’s got a funny way of showing it. Most of us can’t help but look into every little thing LeBron does as something leading to something bigger. His philanthropic choices are obviously representative of what’s in his heart, and that heart is proving to be Presidential in its size and stamina. If James wants the White House, he can have it whenever he’s willing. Let’s hope he’s willing, because he’s certainly capable of leading the free world.

Repeal the War Powers Resolution and give Constitutional order precedence 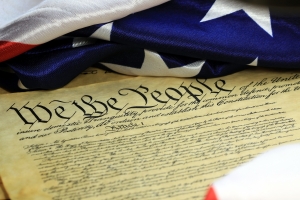 While Article I, Section 8 of the US Constitution grants only Congress the right to declare war, the United States has won and lost (or fought to a draw if it makes you feel better) many wars since Congress last declared war on Dec. 8, 1941. The Korean War, the Vietnam War, the Gulf War, the Iraq War, the war in Afghanistan, Libya, and now Syrian attacks have all taken place without Congress declaring war.

The War Powers Resolution of 1973 was a response to Lyndon Johnson and Richard Nixon’s advancement of the Vietnam War and was supposed to reinforce Article I, Section 8 of the US Constitution over Article II, Section 2, which makes the president commander-in-chief of the armed forces. It clearly hasn’t, as President Donald Trump proved the night of April 6 when he launched 59 Tomahawk cruise missiles on a Syrian air base after it was determined the Syrian government attacked a rebel ammunition cache holding chemical weapons that killed over 100 people -- none of which were American civilians or soldiers.

When Pearl Harbor was bombed on the morning of Dec. 7, 1941, war was declared by Congress the very next day. When the Twin Towers came down on 9/11, the war effectively began the very next day, but without a declaration of war from Congress. Those were attacks on US soil, though. This, however, was not in response to an attack on America, which has members of both major political parties throwing a fit, which is uncharacteristic. Most often the party not inhabiting the White House makes a fuss about the president’s overreach. Both Elizabeth Warren and Rand Paul think Trump’s military action in Syria violates the Constitution.

The War Powers Resolution only requires the commander-in-chief to notify Congress within 48 hours of committing a military attack, and Trump did indeed notify more than two dozen members of Congress of his plan to attack Syria the night of April 6. He did not seek their authorization to do so because it wasn’t required of him thanks to the leeway offered by previous presidents Bill Clinton, George W. Bush and Barack Obama, all of whom launched attacks without Congress. Hell, George Bush, Sr. won the Gulf War in less than 100 hours. How can Congress expect to take back its Constitutional right to declare war if they allow presidents to bomb for 90 days when it took less than five days to win a war in 1991?

The most interesting thing about the War Powers Resolution is that it’s likely unconstitutional, which would make it pretty difficult to replace it. John McCain and Tim Kaine attempted to do so in 2014. They proposed the president should consult Congress before launching a military operation that is expected to last more than a week. It never happened, and it wouldn’t have any teeth today anyways. Bush, Bush, Jr. and Obama have knocked them all out. Drones helped a bit, too.

The War Powers Resolution is useless when one person can blow up the entire world in a matter of minutes without deploying a single soldier. War has become a lot like a catch in the NFL. We don’t really know how to define it, but we know it when we see it. And Americans have gotten used to waging war without declaring war. The United States is in a perpetual war against terrorism, and Americans keep waking up everyday, going to work and mostly ignoring what’s happening on the other side of the world. It’s no different than if war isn’t being waged. Americans everyday can safely assume their country is bombing somebody, and ignorantly assume those people had it coming.

I’m a big believer in the order of things. That is, the order in which information is presented matters, and that’s how I perceive the US Constitution. Article I holds more weight than Article II, and Amendment I of the Bill of Rights is listed before the Second Amendment for a reason. I mean, the whole reason white folks even stumbled upon this country was in search of religious freedom. And I’m not even religious, but I value the right to a free press and free speech over the right to own a gun. In this case, I think Congress’s right to declare war holds more weight than a president’s right to command the armed forces, and I think the Constitution was written in that order for that reason. While a president can’t declare war, he can control military operations once war is declared. I'm sure the drafters of the Constitution didn't think war would be waged prior to a declaration of war, or that bombs would be built that can blow up countries.

I also understand the importance of the president being able to command the armed forces in order to avoid an attack on Americans, and in a nuclear age when one bomb can wipe out an entire country, stopping those attacks is more important than retaliating. That is not the case here. Bush, Jr. didn’t have a very good reason to bomb Iraq, but he really didn’t need one. Neither does Trump with regard to Syria. Allowing Congress to decide whether to declare war might have saved the United States from entering either conflict.

I like the idea of checks and balances, but what Congress really wants is to reign in the powers of the president they’ve already given away. And if Congress really wanted that, they should have passed unconstitutional legislation that had some teeth the first time around, because it won’t happen again. That’s why I think the War Powers Resolution should be repealed and Constitutional order given precedence.