Opinion: Be safe - fire all Catholic priests (except maybe the women) 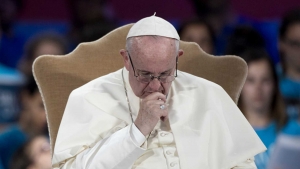 I just finished Netflix’s “The Keepers,” a seven-part, true crime docu-series about the unsolved 1969 murder of Sister Cathy Cesnik and the following abuse scandal at the Catholic school she taught at. The series is raw and harrowing and shocking.  The amount of women and boys that one priest was able to abuse and cover up for decades is almost unbelievable.

Because we’ve seen this kind of scandal before. And we’ll see it again. The Spotlight abuse cover up as reported in the Boston Globe in 2002 and dramatised into an Academy Award winning movie of the same name.

And now comes the Pennsylvania cover up. A new 1356 grand jury report documents that more than 300 priests abused more than 1000 children.

From the opening paragraph of the grand jury report:

“We, the members of this grand jury, need you to hear this. We know some of you have heard some of it before. There have been other reports about child sex abuse within the Catholic Church. But never on this scale. For many of us, those earlier stories happened someplace else, someplace away. Now we know the truth: it happened everywhere.”

“We were given the job of investigating child sex abuse in six dioceses .. We heard the testimony of dozens of witnesses concerning clergy sex abuse. We subpoenaed, and reviewed, half a million pages of internal diocesan documents … Most of the victims were boys; but there were girls too. Some were teens; many were prepubescent. Some were manipulated with alcohol or pornography. Some were made to masturbate their assailants, or were groped by them. Some were raped orally, some vaginally, some anally. But all of them were brushed aside, in every part of the state, by church leaders who preferred to protect the abusers and their institution above all.”

Wow. Protect the institution above all.

But, of course - that’s how it’s always been. Or more importantly, “protect all the men.” Keep in mind, this report is only from a single state and covers the last 70 years. Multiply that by 50 states and then don’t forget to add in the previous four, five or ten centuries.

As usual it took the Vatican a few days to respond. Don’t ask me why it took them two bloody days to come up with the words, “Shame and sorrow” but there it is. The rest of us, within seconds of reading the news collectivilly had plenty to say and was probably more along the lines of, “Wow. The sick fucks running the Catholic Church covered up for another bunch of child raping male priest fuck heads! Just like they always do!”

Seriously, that took me all of twenty seconds to come up with. But as usual the Catholic Church waited to see if this recent abuse scandal would blow over and so they bit their tongue and said nothing. (Which is what they are good at).

Here is a video at MSNBC where survivors share their survival stories. One, an elderly man talks about his abuse in 1948 and flat out says incredulously (and correctly), “Who would believe me. A priest abused me? In 1948?”

He was right then. And he would have been right up to until … maybe two days ago when this grand jury report came out. I hate to be a cynic and assume that thing will go back to priests raping children because, after all - the Church has a lot of money to spend on PR and lawyers.

But that’s probably what will happen. Until the people at the top of the Church go to jail for this - things will only temporarily change at the bottom of the totem pole.

I mean, the Pope could do something about it. The Pope could, basically fire the shit out of all top brass involved. But, to be honest, he would have to probably get rid of the vast majority of the Church top brass all over the world. These scandals are just all too common and widespread for most top brass priests to not have their hands dirty at one point or another.

Actually, to be fair, I don’t know if the Pope can “fire” priests. Excommunicate them? Maybe that’s it. Maybe the Pope should just excommunicate 100 percent of all the priests above the level of OT V!

Well, whatever, The Pope can fire the shit out of them too.

I hope some justice happens and a lot of priestly heads will roll (metaphorically speaking). Alas, I just expect the Church to throw their endless cash reserves at the problem and it will all go away.

And then the Catholic priests will again, come out, come out from wherever they are.

And finally, does anyone else understand how Catholic priest sexual abuse would drop to about 0.0 percent if all priests were women?

The state of voter suppression in America

Suppressing the Student Vote in America

Young voters can sway elections, and the Republican-led New Hampshire Senate has passed a “poll tax” that will suppress student voting. The bill will likely pass the Republican-led House, but Republican Governor Chris Sununu doesn’t support the bill and could veto it. Regardless, the constitutionality of the bill has been called into question.

Now the New Hampshire law isn’t a “tax” in the exact sense of the word. Instead of forcing out-of-state students to pay a tax to access the polls, which would be unconstitutional, House Bill 372 allows the State of New Hampshire to impose fines on voters who do not have a New Hampshire driver’s license, even though it is legal to vote in the state with an out-of-state license.

The bill would impose two obligations on new voters. Within 60 days of registering to vote, a New Hampshire voter would need to register her car with the state and obtain a New Hampshire driver’s license, the cost of which could amount to over $200.

Suppressing the Minority Vote in America

Minorities have already been deciding elections in America, with black voters making the difference in Alabama. This is a major threat to Conservative incumbents, and Conservative-led, state legislatures have taken measures to suppress the minority vote in America.

Ohio’s law purging voters who have not participated in consecutive elections or failed to respond to a notice from state officials will likely be upheld by the Conservative majority of the Supreme Court.

While federal law doesn’t allow states to use failure to vote as a reason for purging voters from rolls, federal law also calls on states to keep accurate voter rolls and allows for removal when a person fails to respond to a state’s request to confirm registration and then fails to vote in two federal elections. Ohio sends a notice after a voter misses a single election, and removes said voter if they don’t reply. It’s the most aggressive law of its kind in America.

Redistricting All the Rage in America

With the 2020 census upcoming, the redrawing of states’ voting districts is getting a lot of attention, especially in the courts. Pennsylvania’s Supreme Court ruled 5-2 that its voter district map was partisan gerrymandered to benefit Republicans and must be redrawn.

Bills governing redistricting were introduced in 27 states in 2017. Here’s a complete list of those bills. What’s the reason for so much redistricting legislation? Well, 37 state legislatures have primary control of their own district lines, and 42 legislatures have primary control over the congressional lines in their state (including five of the states with just one congressional district). And why wouldn’t an incumbent legislator draw district lines to his or her advantage? That’s why organizations like Common Cause are having success campaigning for independent commissions to handle district drawing. All of the 27 states with pending legislation governing redistricting have bills calling for a commission separate from the legislature to handle the map-making.

For instance, in Minnesota, there are companion bills calling for independent commissions to handle redistricting. HF 246 and SB 2052 call for a commission of former judges to draw district lines, but objectors to the bills say former judges aren’t representative of Minnesota’s minority populations. In nearby Michigan, bills have been introduced mirroring California’s citizens’ commission for redistricting -- the favorite model of organizations working toward democratic, competitive elections.

So while the state of voter suppression in America is improving and bound to continue improving for voters, there will still be states where partisan gerrymandered districts result in undemocratic, noncompetitive elections in 2018 and 2020. And until every state gets redistricting out of the hands of incumbent legislators, free elections are an impossibility.