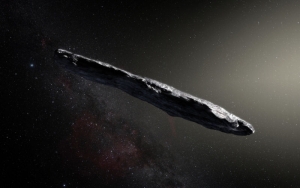 Greetings interstellar traveller / hyperbolic asteroid 1I/2017 U1, welcome to our solar system!

Technically you’ve been here for quite a while  just passing through, drifting about, minding your own asteroid business but we’ve only just found you! You have no way of knowing this but, you’ve been named -- ‘Oumuamua from the Hawaiian word meaning “scout” and generally translates as “scout from the past.” You have a very lovely name. Also, for clarification, that first character in your name is a Hawaiian ‘okina, not an apostrophe.

Our Earth scientists have long suspected that tens of thousands of space rocks, such as yourself, have visited our fine solar system but until recently we were unable to detect you all.

That all changed, of course, when very smart folks at Haleakala Observatory (in Hawaii) brought the first Pan-STARRS telescope (PS1) online. ‘Oumuamua -- just to be clear, this PS1 is totally different than what you probably believe a traditional PS1 to be (currently upgraded to a PS4).  The PS4 stands for “PlayStation” 4 and is a kick ass console blu ray / game player.  The PS4 according to wikipedia:

The PS1, the one we used to find you, stands for “Panoramic Survey Telescope and Rapid Response System” (Pan-STARRS). The PS1 according to wikipedia:

“… consists of astronomical cameras, telescopes and a computing facility that is surveying the sky for moving or variable objects on a continual basis, and also producing accurate astrometry and photometry of already detected objects.”

As you can see,  ‘Oumuamua, not quite the same thing.

Anyway. We don’t know exactly where you came from as that would be extremely difficult to figure out, but for now, our best guess is star Vega, about twenty five light years away. That being said, we are certain you are indeed from another solar system as, according to this astrophysical survey your orbit would be virtually impossible to achieve within our solar system. Our solar system that we have cleverly named, “Solar System” -- because that’s how we roll.

You; however, roll quite a bit different. You are red (the color of organic carbon-based molecules), extremely elongated (thirteen hundred feet which is ten times long as you are wide -- you look like a giant space cigar) and you travel at approx.85,000 mph.

For comparison, ‘Oumuamua, I once lived in NYC and dated a woman in Washington DC. It order to visit her on weekends, it would take me about 3.7 hours to drive the distance between us. It would take you .0026 seconds to make the same trip!

Well, it looks like you’re just kind of passing through, so I was just sayin hi.  It appears as if you’ll lap Jupiter sometime around May, then pass Saturn in January 2019 and eventually exit stage left en route to the Pegasus constellation sometime after that.

By all accounts it appears as if you’re just a really long mineral rock asteroid and you don’t carry any sort of super cool alien species. You know, cool little guys like that adorable Invader Zim or those E.T. phone home cuties. And I certainly hope you are not rudely carrying those evil little alien pricks from Alien and Aliens and all those not worth mentioning by name subpar sequels.

Actually, with that in mind, ‘Oumuamua, just in case you ever watch James Cameron’s Aliens, when characters refer to the alien species as a “xenomorph” they are not suggesting “xenomorph” is the name of the alien species on LV-426. They are using the word from the Greek construct - xeno, meaning “foreign” or “strange” and morph, meaning “a shape or form” which means in the context of the film the characters are suggesting the aliens in the movie are “strange foreign forms” -- an alien life form.

Again -- xenomorph is a generic term for an alien life form.

Xenomorph is not the name of this species.

Just wanted to clear that up for you, ‘Oumuamua. You know, in case it ever comes up in conversation with your asteroid buddies.

That’s all I got. Nice to meet you.