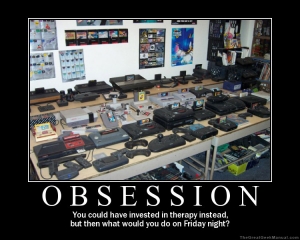 The controversial and often ridiculous “gaming leads to violence” argument rears it’s ugly head once again. Multiple sources report that the World Health Organization proposed a revision to their International Classification of Diseases (ICD-11) to classify gaming behaviors as a mental disorder, labeling it a “disorder due to addictive behaviors,” and later a “hazardous gaming” section. Responding to the classification, dozens of game savvy scholars paused their Xbox One to immediately pen an open letter to the W.H.O., which saves me the trouble of doing so.

The authors of said letter have more expertise than me, ranging from the obvious “video games, internet and social media” to broad categories like “children’s rights in a digital age” to the slightly obscure “epidemiology of healthy and unhealthy use of new media” and more. Their letter, "Gaming Disorder in ICD-11: Letter of concern" states, “Concerns about problematic gaming behaviors deserve our full attention. Some gamers do experience serious problems as a consequence of the time spent playing video games. However, we claim that it is far from clear that these problems can or should be attributed to a new disorder, and the empirical basis for such a proposal suffers from several fundamental issues.”

Included within the letter are their main concerns:

“The empirical basis for a Gaming Disorder proposal, such as in the new ICD-11, suffers from fundamental issues. Our main concerns are the low quality of the research base, the fact that the current operationalization leans too heavily on substance use and gambling criteria, and the lack of consensus on symptomatology and assessment of problematic gaming. The act of formalizing this disorder, even as a proposal, has negative medical, scientific, public-health, societal, and human rights fallout that should be considered. Of particular concern are moral panics around the harm of video gaming. They might result in premature application of diagnosis in the medical community and the treatment of abundant false-positive cases, especially for children and adolescents…”

But, wait, kids are impressionable and stuff. Shouldn’t we protect them from all forms of possible harm including addictive gaming behavior and/or video game violence?

Well, the CD-11 proposal doesn’t discuss violence, but yes, inevitably a conversation about video games eventually leads to a discussion about the violence within video games. A typical argument of, “this video game will turn your sweet, perfect child who never does anything wrong (ever!) into a chaotic evil homicidal lunatic!” is nothing new, sadly .

Back in the early 1990s, the hardest game to find (ever!) was Night Trap, an interactive movie/video game developed for the Sega/Mega-CD and released in late 1992. The game is 90+ minutes of full motion video sequences. The player switches the point of view between various hidden cameras monitoring the interior of a house and then can activate traps to capture intruding vampire creatures (called Augers) in hopes to prevent the house women (one of which is played by Dana Plato of Diff'rent Strokes) from having their blood drained.

The game was instantly notorious for “adult themes,” a violent, blood-draining “mechanic,” and a controversial “nightgown scene,” which led to the game being pulled from the market. Today this game would be considered laughably tame.

This all came to a head in 1993 with the Senate Committee Hearings on Violence in Video Games. I don’t know if Night Trap was solely responsible for the hearings, but I’m certain it was a factor, as the committee often mentions the game citing it as "shameful," "ultra-violent," "sick," "disgusting," and claims it encourages an "effort to trap and kill women.”

Wait. What? An “effort to trap and kill women?” Huh?

The documentary Dangerous Games, included in the PC version of Night Trap, allows producers and cast members to defend the plot and clear up that fact the gameplay is designed to, obviously, prevent the harm of the women in the house. In addition, “the blood draining device is intended to look very unrealistic to therefore mitigate the violence.” Despite scenes in which the girls are grabbed or pulled by enemies, “no nudity or extreme acts of violence were ever filmed or incorporated into the game.” As is usually the case, no one on the committee had ever played Night Trap and the whole hearing views on YouTube like a posturing mess of out-of-touch, old, white men.

Night Trap is not the only game that has been under fire over the years. Controversy follows video games like bees to honey. Games such as Doom (violence), Mortal Kombat (violence), The Grand Theft Auto Series (adult themes, trigger warnings, violence, violence against women), hell, even Leisure Suit Larry was controversial (obscenities and mature themes) in it’s time, the list goes on and on. Some games clearly deserve the controversy more than others.

Wait. Stop. Did you just softball the misogyny of Grand Theft Auto and compare it to the almost non-controversy of Leisure Suit Larry?

Kind of. The crux of the issues with the W.H.O. classification of “Gaming Behavior” doesn’t revolve around violence, but since the two are often intermingled I wanted to bring it up but don’t want to go too far down that rabbit hole.

I will say that, of all the games I am aware, GTA is the most problematic, as it’s a game that, arguably, glorifies violence against women up to and including sexual assault and murder. Much has been written about the moral bankruptcy of the game. I’ll let an excellent article in polygon continue the GTA discussion but then I have to move on: Regarding GTA 5 - It’s Misogyny  Can No Longer Be Ignored.

Back to the matter at hand, the W.H.O. and “Gaming Addiction”

The focus of the W.H.O. classification is clearly on the words “obsession” and “addiction,” linking both to symptoms of mental disorders. Which, to be honest, does seem a bit fair.

The most famous case of obsessive gaming is the 1991 “EverQuest suicide” of Shawn Woolley, a Wisconsin kid that struggled with learning disabilities and emotional problems. When he was twenty one years old he found a new job and moved into a new apartment.  Less than a year later, while he sat at his computer desk, he shot himself.  The online game, EverQuest, was on the monitor in front of him.

His mother, Elizabeth,  has since blamed EverQuest for significantly contributing to Shawn’s suicide.  She told multiple sources that Shawn,  “...in mid 1991...stopped working, stopped cleaning his apartment and stopped seeing his family. He wouldn’t let anyone come in and all he did was sit at home and play EverQuest. That was the beginning of the end.” Her view of online games is that they are designed to include addictive qualities that are unhealthy to the gamer.

After Shawn’s death Liz created the website On-Line Gamers Anonymous or the OLG-Anon. Elizabeth founded the site in 1992 in order to, “...share our experience, strengths and hope to help each other recover and heal from problems caused by excessive game playing, whether it be computer, video, console, or on-line.” OLG-Anon continues to operate today.

Shawn’s story is tragic, but I suspect you are thinking exactly what I am thinking. Elizabeth describes Shawn as someone who struggled with, “learning disabilities and emotional problems.” I’m inclined to believe, “emotional problems” more so than obsessive online gaming, were the root of Shawn’s sad end. That being said, I 100-percent agree that too much gaming can be unhealthy. Of course, I believe that too much of any one thing can be bad for you. Even drinking too much water can be unhealthy!

I’ve seen obsession similar to Shawn’s. A former roommate spent anywhere from eight to 10 to maybe 16 hours a day playing World of Warcraft online. He would pause for sleep, restroom breaks and meals (which he would eat in front of his computer). He would not clean his room, the interior of his car was a disaster, he would not do dishes, and he certainly couldn’t be bothered to remove empty bottles, cans or pizza boxes from on or around his computer desk.

You will be shocked to learn said roommate was notoriously underemployed and pretty damn dateless for the three (or four?) years he was glued to WoW. But then he got over it. So while I agree gaming can be unhealthy, I have yet to read one legitimate study to convince me that even the unhealthiest of gaming choices is a gateway to violence or violent behaviors.

As for “gaming behavior as a mental disorder?” Well, I don’t know. My gut instinct is, “Gaming can’t be classified as a mental disorder ... because that would be silly.”  On the other hand, there are some really silly mental disorders already out there: triskaidekaphobia, explosive head syndrome, the Jumping Frenchmen (of Maine) syndrome. If gaming can become SO obsessive and SO addictive … then maybe it deserves a place in the mental disorder hall of fame along with those listed greats.

But probably not. Referring back to the open letter:

“The healthy majority of gamers will be affected by stigma and perhaps even changes in policy. We expect that inclusion of gaming disorder in ICD-11 will cause significant stigma to the millions of children and adolescents who play video games as part of a normal, healthy life … In brief, including this diagnosis in ICD-11 will cause signiﬁcantly more harm than good. Given the immaturity of the existing evidence base, it will negatively impact the lives of millions of healthy video gamers while being unlikely to provide valid identification of true problem cases.”

There is a mountain of anecdotal evidence to suggest gaming can be unhealthy. There is an equally colossal volume of peer reviewed actual evidence to suggest gaming has a host of positive benefits (especially for kids) including (but not limited to): helping them learn to follow directions … engaging in problem-solving to find solutions …. learning strategy and anticipation, understanding management of resources, reading, multitasking and quick thinking. The lists just go on and on.

I’m not going to link every study I’ve read because, trust me, they are real easy to find on your own. And the reason they are real easy to find is because there is a crushing amount of studies suggesting there are many healthy, and some unhealthy, things about gaming (SPOILER ALERT:  But the healthy benefits seem to far outweigh the potential unhealthy aspects). So, don’t take my word for it. Get to that Googling.

Now, if you’ll excuse me I have to Rage Quit  Darkest Dungeon before I can move onto XCOM2. Then I will finally have time for that glorious month long Mass Effect: Andromeda binge!

If you like this article, you might enjoy the GCN Live talk shows:  Americanuck Radio or Free Talk Live