The Village Voice, closing after 60+ years 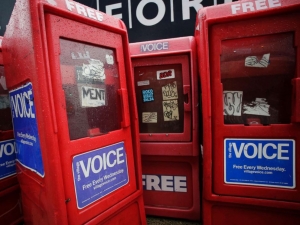 It sounds as if the famous counter culture alternative weekly has finally gone the way of the Dodo. After 62 years in print and one final year online only, the Village Voice has ceased the publication of new stories. Village Voice owner, Peter Barbey released a statement basically saying he couldn’t keep the publication in business due to harsh economic realities.

Most of the staff is going to be (or perhaps already has been) laid off with only a skeleton crew remaining behind to work on a digital archive of past stories.

This story is nothing new. The Village Voice joins a long list of familiar names that have abandoned print in favor of online only content - Jet, Computerworld, Vibe (who now prints only quarterly, I believe), Electronic Gaming Monthly (which has come and gone in print for the last decade and is currently gone).  But that doesn’t mean they won’t be back.

About the only chance the Voice has is if it’s sold to a larger conglomerate that can eat up a bit of a loss to get it (print or online) back in shape.  To outsiders (as in, those living outside NY) the Voice probably always seemed like a gossip rag but New Yorkers loved it and viewed it more as news that affected New Yorkers and a local info source for all sorts of counter culture shows, venues and art. I lived in NY for several years and let me tell you, that mag was revered in coffee shops around the five boroughs.

But the closing was to be expected, especially if you know anything about NYC (and / or currently live there). “Counter culture,” and I use that phrase in the common sense attachment of the word, has become more mainstream. Hot Topic flourishes in malls around the country sitting pretty next to a Footlocker or a Gap, while most brick and mortar alternative retail locations have faded (though I note that Trash and Vaudeville is still going strong on 7th street!). Even NY’s most famous alternative 24 hour restaurant, The Yaffa Cafe closed down a few years ago. (Which made me sad - I adored late nights at the Yaffa Cafe).

And so it comes as no surprise to me that the mainstay alternative press in NYC has finally closed down as well. And so after more than 60 years in publication the Village Voice is no more. Perhaps, a miracle buyer will resurrect the beloved alternative press but … I won’t hold my breath.