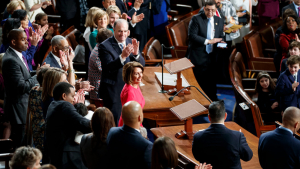 Nancy Pelosi wins (and she probably will in January, too) 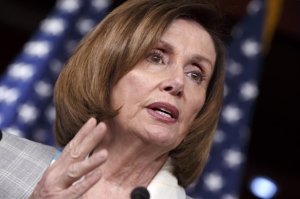 House Minority Whip, Nancy Pelosi, was easily nominated by House Democrats in a 203-32 vote to secure her potential return as speaker. That 85% margin is actually much higher than her last time around the block when she won the nomination by a 68% vote facing challenger Rep. Tim Ryan (Ohio). But that’s what happens when you run unopposed, as she did this time.

Pelosi’s win is not unexpected despite the few dozen “Never Nancy” freshmen incoming congressmen. A few behind closed doors deals here and there and suddenly, most of those Never Nancy folks have changed their minds. All they wanted, obviously, was seat on a committee or a promise for this, or a deal for that. Most of the Never Nancy stuff was nonsense posturing masquerading as politics as usual.

But there are a handful of hardcore Never Nancy folks that still claim they will not support Pelosi in the upcoming January vote when both sides of the House get to vote on the new upcoming Speaker role. This too, reeks of political posturing.

The Democrat opposition against Pelosi seems to be spearheaded by Rep. Kathleen Rice (NY-4th district). Rice’s main beef, as I understand it, is twofold. First, that Pelosi has already had her chance and now new (perhaps, younger) leadership should be explored. I’ll quote her for her second point,

“...backroom deals represent the establishment-based transactional politics that the American people hate and patently rejected on Election Day (2018) … These tactics also stifle fair and open leadership elections within our caucus and perpetuate the leadership stagnation that has plagued our party for over a decade.”

And these are all fine points.

But now the Democratic Party has nominated Pelosi to be their Speaker representative for the January vote and common sense and reason tell us all that Rice should back her own party’s nominee, right? She had her voice. She lost. Now - do the right thing and vote for your party’s nominee.

Republicans are going to have a nominee as well. But so far, Rice is pressing on with the Never Nancy nonsense. Rice also has 17 other House Reps., mainly incoming freshmen, that claim they will not vote for Pelosi, either. And if you do the math, Pelosi can NOT lose 18 Democrat votes. Because, assuming all other Democrats, outside the Never Nancy 18 vote for Pelosi, and all Republicans vote for the nominee - then Pelosi will lose and the Republican nominee will actually win the Speaker role - even though Democrats control the house.

This is not something the Democratic party will stand for. Trust me. If the Never Nancy rebellion goes so far as to get a Republican Speaker nominated when the Dems control the house, well, the Never Nancy folk can kiss their political careers goodbye.

Besides, there is a furious push from powerful, influential Pelosi supporters up to and including John Kerry and Barack Obama. I’m sure you’ve heard of those guys. In fact, the Never Nancy crew was actually significantly higher until recently. Pelosi and her team have flipped more than a dozen Congress-folk from the Never Nancy movement to Pelosi’s side.

Of course, they all changed their minds, as I mentioned above, during closed door meetings, which is precisely what Rep. Rice is talking about. So, there’s that.

But still, the time to rebel against your own party is - not, bloody, now. I suspect most of the Never Nancy crew will fall in line before that crucial January House vote. There will be a holdout or two, for sure. But threatening to not vote for your party’s nominee and allowing the opposing party to keep the Speaker role - that way lies madness.

And we’ve had enough madness these last two years.