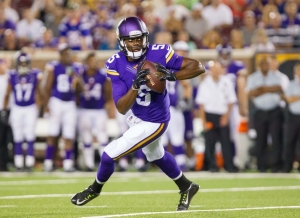 Bridgewater has not played in almost two full seasons after suffering a noncontact injury in practice early into the 2016 season. The Vikings then acquired Sam Bradford via trade who took over as QB1 and brought the Vikings to a mediocre 8-8 season.

While it’s true that Sam Bradford has his best pro season in 2016 -- passing for 3877  yards and a NFL record 71.6% completion rate but a struggling offensive line led to too many hurries, knockdowns, sacks and a dismal running game.

But still Bradford was the go to guy at the beginning of the 2017 season and had a career high day in the Vikings opening game vs. the Saints. But it was just not to be. A knee injury, or perhaps The Curse of the MN Vikings, forced him out and backup Case Keenum took over and quietly led the Vikings to the top of the NFC North going 4-2 as a starter.

BUT THEN -- a miracle recovery from Teddy Bridgewater has brought him back to the Vikings roster and he is suiting up for the first time in more than a season. What’s a head coach to do? Force Teddy in and hope he can bring back his magic or stay with the dependable backup Keenum? The Vikings are currently 6-2 and lead the division.

After all, if it ain’t broke …

It really was a no brainer for Vikings head coach Mike Zimmer. Teddy needs to slowly warm up back into football. Keenum starts. Bridgewater backs up.

It’s a wise decision. As for Bradford. Well, I’m almost one hundred percent positive that Bradford is done as a Viking, maybe done in the NFL. His two year contract is up at the end of the season and he is currently on his third knee injury. If Bridgewater remains healthy I suspect the Vikings will offer Teddy a monster contract to remain with the Vikings and start again in 2018.

Which is great news for Vikings fans. By all accounts Teddy Bridgewater is the real deal -- young, handsome, talented, intelligent and an extremely warm and friendly person. When asked by reporters about being back on the field after such a long injury absence, Bridgewater had this to say,

“It’s always hard when the guys are going to work, and you have to go in the opposite direction. It’s like when all the kids are going to P.E. and you have to go to detention or something like that. I’m not saying what I was doing was detention, but it was hard, especially being a competitor and knowing how much these guys mean to me and knowing that I couldn’t be out there with those guys … (when asked about the possibility he might not return to the NFL) I never had any doubt, and that’s a credit to the people around me. They never once let me get down. They never counted me out. So getting back out there, this is not only about me. This is about the people who counted me in. There are a bunch of people who counted me out, outside this building and things like that, but at the end of the day it’s about going out there and competing for these guys in this locker room and all of the people that counted me in. So once I get out there, there’s no regrets, no holding back. Whatever’s meant to happen, happens. I trust God’s plan for me, and I’m going to go with that.”

I’m glad to hear The Curse (of the Vikings) didn’t strike Bridgewater low.