I try to be well informed on many public policy matters, but I pretend no great expertise on international relations and conflict.  That said, some thoughts on those subjects in light of the current conflict in the Middle East.

As my daughter is learning in her government class, a fundamental duty of national governments is to protect their people from external threats.  After World War I, some Republicans became isolationist, claiming we had little or no stake in many international affairs, and the Great War showed the costs and risks of getting involved.

They were certainly right about the costs and risks.  If all recorded history had not been sufficient to teach us the horrors of war, the Great War certainly should have done so.   The loss of human lives and damage to many survivors and their families, the destruction of cities and towns, of economies, infrastructure and cultures is on its face insane unless it is the only way to avoid even worse developments.

We did not get the worst of that war, although we got plenty.  But Europeans who fought it from start to finish and on their own grounds should have learned because they did.  Nonetheless, they had little choice but to fight World War II because the aggressive evil of racist German National Socialism and Italian fascism attacked them viciously, leaving no alternative.

The isolationists thought we could stay out of that war because we had oceans between us and it.  Some folks believed then and now that if we’re peaceful, non-interventionist and amicable with other countries, they’ll respond in kind.  These views were definitively shattered by the murderous, racist, aggressive Japanese militarism in Asia and then Pearl Harbor.

Two things were clear after WWII.  First, there are significant numbers of evil people and ideas in the world and they sometimes control the means to wreak great destruction.  So, we must be ready to fight and defeat them.

Second, mountains and oceans are no longer significant barriers behind which to hide.  Moreover, there is a compelling positive reason to actively engage with other nations: the huge economic and cultural benefits we get from trade and international relations.

So, we need to maintain a substantial, ready national defense.

The expansionist, totalitarian and murderous evils of Soviet, Korean, Cuban and Chinese communism proved such malign forces were not wiped out in two world wars.  It seems there’s always another one waiting around the corner.

However, with the end of the world wars and the rise of communism following hard on, engaging in war and preparation for it became normal.  Indeed, as President Eisenhower warned, a military-industrial complex had grown from these circumstances and now had an interest in arms production and fomenting conflict.  The MIC is still as powerful, influential and pernicious as ever.

One important lesson of the fall of the Soviet empire is that evil doctrines, if contained, will fail from their own evil.  Thus, the implosion of the Soviet Union because it could not compete with democratic market liberalism.  (For a while, China took a capitalist road, but returned to ruthless authoritarianism.)

Some academics proclaimed this triumph brought the end of history.  They forgot there are always new evil doctrines.

In the last half century, Islamofascism has metastasized because it originated in the Mideast, where the unearned endowment of oil and gas riches, shared by the Saudis with Islamofascists as a defensive measure, allowed it.  Islamofascism is evil because it is in its essence hostile to individual liberty and markets.  And because it views terrorism as a legitimate element of war.

President Bush 43 erred in embracing nation building as a counter-measure. President Trump got things right in promising to stop the endless wars where we have no real interests at stake.  That means most of the Middle East, not including Israel.  His surgical strike to kill Major General Soleimani was an ideal response to Iran, especially after foregoing drone strikes.

Now he must find a way to end most of our involvement there and bring most troops home while proportionately parrying Iran’s counterstrikes.

Want a definition of the word hubris? Look Up Ilhan Omar and Rashida Tlaib. 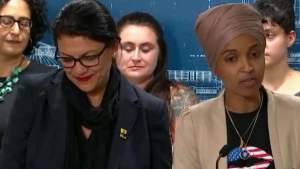 I always hesitate to write about our two freshmen Muslim Congresswomen and Israel because the first reaction of those who will not agree with me is that I’m Jewish and I just don’t understand their attitudes.

You would be half right.  I did grow up in a reform Jewish family, my parents were educators, I went to Sunday School every year from Kindergarten to 10th grade, was Bar Mitzvahed at age 13 and am pretty conversant in comparative religion.  But I also understand Ilhan Omar and Rashida Tlaib, maybe better than they understand themselves.

How do people like these get elected to Congress?

The same way Donald Trump became President.  By playing to their base.

Only their base is a group of people who simply don’t want to come to America and assimilate.  They want to come here and make us into Somalia.  Or, any number of other failed states in the Middle East.  I know, I know…Tlaib was born in Detroit.  Have you been to Detroit lately?  It bears a strong resemblance to certain cities in the Middle East.  So do a lot of cities run by Democrats these days.

Omar and Tlaib in their tender freshman term have a bad case of hubris.

Hubris is a noun which is defined as “excessive pride or self-confidence”—something many politicians are afflicted with but usually as they climb further up the ladder.

To repeat a story I’ve told many times, when we had a radio station in Tulsa, we had a regular caller named Jack Jackson.  He used to say that when someone gets elected to the school board, the city council or the county commission, they get down to the school headquarters, city hall or the county courthouse, they see the receptionist and that 10 button phone, they take a whiff of that pink gas and they’re never the same.

You can imagine what happened to these women when they got elected to Congress.

They took that pink gas out of a mask hooked to a tank they had delivered to their offices.

It’s an occupational hazard for politicians of all stripes but it is especially contagious among those who are being egged on every day by the fake news media.

So what these two clowns have done is to take on Israel.

There was a bi-partisan House delegation which went to the Middle East and talked to all sides from August 5th to the 15th.  These women could have easily been part of that group.  But noooooo.  That’s would not have shined a big enough spotlight on them, so they announced they would make a separate trip to Israel to talk with…wait for it…the Palestinians—whoever they actually are.

Israel did what any sovereign nation has the right to do.  It said NO.  Then, Tlaib said she wanted to see her Grandmother—who she had never met—living on the West Bank.  Israel immediately said yes to that on humanitarian grounds.

Was that good enough for Ms. Tlaib?

Ummmm.  No.  “Silencing me & treating me like a criminal is not what she wants for me,” she said of her grandmother.  “It would kill a piece of me. I have decided that visiting my grandmother under these oppressive conditions stands against everything I believe in.”

Israeli Interior Minister Aryeh Deri summed it up neatly.  “Last night, she sent me a letter asking her to allow her to visit her 90-year-old grandmother ‘because this could be my last chance to meet her’.  I approved it on humanitarian grounds, but it turns out that it was a provocation to embarrass Israel. Her hatred for Israel overcomes her love for her grandmother.”

Hubris is a tough taskmaster.

Worse are the American Jews who are—for almost inexplicable reasons—so hard core Democrats that they’ll overlook this and blame Israel.

But I have a suspicion that if the Omars and the Tlaibs become the face of today’s Democrat party, you may see what my friend Wayne Allyn Root calls a JEXIT.

We are almost 75 years away from the end of the Holocaust which made the need for a Jewish state apparent.  It’s easy for people who have no connection to World War Two to have no passion for this never to happen again.

Perhaps it is necessary for everyone to study some history so that it can never repeat itself.

And maybe some Democrat elders should explain to Omar and Tlaib that—in the total scheme of things—they are not past grade school and their hubris may well stop them from getting to high school.