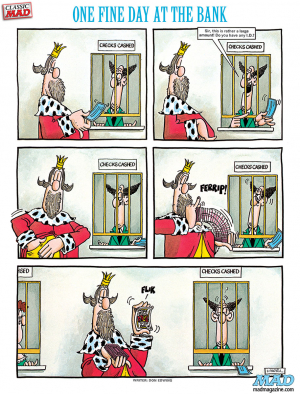 Of course, “no longer publish NEW content” is far from “closing permanently.” Cracked ceased publication but evolved into a highly successful website: Cracked.com. Mad magazine will cease publishing “original content” and instead will revert to publishing “new” monthly issues that contain recycled material from its previous 67 year run. Of course, the “new” issues will still have original cover artwork and it sounds as if the planned end of the year “holiday” issue will actually have new art and new content. The other kicker is that Mad magazine will no longer be widely available in, say - supermarkets or bookstores. In order to receive a copy you will have to either subscribe or visit a specialty comic book shop (Mad magazine is now owned by DC comics).  So, Mad magazine is not exactly ceasing all publication as reported at the beginning of the week. I mean, at least for now.

A subscription based model that reprints recycled bits from Mad’s long history, um … miiiiiight work.  But, probably not. Which is too bad because, like many, I grew up reading Mad (and Cracked) thinking that Mad host character Alfred E. Neuman and his moniker, “What, me worry” was pretty damn cool. Spy vs. Spy was my jam and Mad introduced me to artist Don Martin and all his various characters up to and especially including, The Mad Adventures of Captain Klutz (which was published in the Mad magazine paperback line of books, not the actual magazine itself).

So, it appears as if Mad is not exactly going out of print; however, it is changing to subscription only that reprints previously written material which means that it’s not exactly dead but it might as well be. I mean, if you want to publish collections of old material in a Volume 1, Volume 2 compilation, well - that’s a totally legitimate thing to do. Lot’s of comic runs do that. But, that’s not exactly what is happening here. In fact, I would say just dump the “new” monthly recycled material magazine and only publish a holiday “year in review” with all new content and all new art. Just make it a once a year magazine. Make it an event. Make it something special.

The recycled once a month model really seems to be a - we’re going out of business  but, um not really. But, kind of. But we’re shutting down, but not really. But … you know … we kind of are.  But we also - kind of aren’t.