Path of Destruction: A Brief History of the Mother of All Bombs 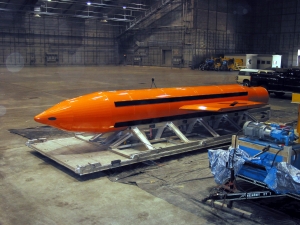 It’s been widely reported the U.S. dropped the Mother of All Bombs (MOAB) on Afghanistan, demolishing a tunnel lair and killing thirty six Islamic State terrorists. Every news site currently has headlines discussing the tactical details, the ethics and the cost of the weapon. Like many of you I am a bit awestruck in the details of the destructive force of the explosion and the cost of the weapon. The MOAB costs approximately sixteen million dollars apiece so the price per dead terrorist is about $444,000.

I don’t want to launch into snarky arguments about where that money could have been better spent, that’s what Facebook and Twitter is for. But it all got me to think about the bomb itself. Where exactly did the “GBU-43/ B Massive Ordnance Air Blast,” come from?

Like much of modern warfare, the seeds of the MOAB were planted in WWII. Throughout the Second World War both the Axis and Allies used rotorcraft (mainly helicopters) for a variety of roles; usually for reconnaissance or rescue operations. In fact, during the “China-Burma-India-Theater,” if U.S. military gliders were unable to reach downed American bombers, the Air Force would send helicopters to extract the stranded flight crew.

During the Vietnam War, the use of the helicopters expanded and the US Army relied on “choppers” as they never had before. The military plan was to use the heavily armed UH-1 “Huey” helicopters as cavalry. Huey’s would be able to offer air support, quickly resupply platoons or evacuate wounded. It was all part of the military strategy to heavily rely on the helicopter.

But there was a problem. The geography of Vietnam is a chaotic tangle of rugged mountain peaks, extended forest and flatlands. Sure, the Huey’s had no problem landing in the flatlands but there were no natural landing zones (LZ) in the peaks or the forests.

Something had to be done about that.

“...originally designed to clear helicopter landing zones and artillery emplacements in Vietnam ... but also powerful enough to strike against specific targets such as warehouses, vehicle parks, and enemy troop concentrations … It is detonated just above ground by a 38-inch fuse extender. This results in maximum destructions at ground level without digging a crater.”

A nice range of photos showing the flat destruction of a “daisy cutter” and the type of LZ it creates can be seen here at www.peteralanlloyd.com. Basically, the bomb pulverized the trees in a large radius but the ground remained relatively flat. All your LZ problems have been solved.

Later, the “Daisy Cutter” is used in Afghanistan, first in an attempt to clear minefields, and then ,due to its 300-600 yard blast radius, as an intimidation weapon as the bomb can be seen, heard and felt for ten(ish) miles.

At the time it was one of the largest conventional weapons ever to be used.  The BLU-82 was retired in 2008 and replaced with the much more powerful, “Mother of all Bombs.”

Enter Albert L. Weimorts (1938-2005). For his entire civil engineering career, Albert designed bombs for the Air Force and created some of the largest non nuclear bombs ever made. Sometime around 1990, Mr. Weimorts was turned on to a particular “bomb problem.” Apparently, Saddam Hussein's bunker was impenetrable. Well, obviously, the United States had issues with that and so turned to Albert to create a bomb that could penetrate the impenetrable.

From a Dec, 25th, 2005, NY Times article by Douglas Martin, “...need for this new bomb came after 2,000-pound bombs failed to break through a hardened bunker used by Iraqi leaders, possibly including Saddam Hussein himself. A book prepared by U.S. News & World Report, "Triumph Without Victory: The Unreported History of the Persian Gulf War" (Times Books, 1992), said "numerous officials" claimed the bomb was built explicitly to kill Mr. Hussein, although the first President Bush publicly said the Iraqi leader was not a target.”

The article quotes Mr. Weimorts from the book, "We understand quite well what it takes to penetrate targets -- what it takes in terms of fusing, survivability, explosives and all," Mr. Weimorts said in an interview with the authors. Ideally, such a bomb would have to be dropped from a high altitude, meaning the United States and its allies needed to establish total air superiority in order to use the weapon. "Just three days into the war, it looked to me like that was possible," Mr. Weimorts said. "So I sketched out something that we could carry high, and it would be heavy."

And so the world is introduced to the GBU-28s Bunker Buster, a bomb capable of piercing hardened concrete and exploding only when it had penetrated to a certain depth. The Massive Ordnance Air Blast (MOAB) was conceived, designed, created and falling on bunkers northeast of Baghdad, within five weeks.

Based on the success of that program the Air Force looked to Mr. Weimorts to upgrade the elderly “Daisy Cutter.” The Air Force wanted a “shock and awe” bomb for use as an anti-personnel weapon and for soft and medium surfaces and covering extended areas and targets in a contained environment such as a deep canyon or within a cave system.  On March 11th, 2003 the MOAB was first tested at Eglin Air Force Base in FL. Then again on Nov 21st, 2003.

The Pentagon ordered twenty MOAB’s built for a grand total of $314 million. And then, for the next fourteen years, there they sat, in a warehouse, or a hanger or a garage or something. Somewhere. No one ever used them.

Until now. On 13 April 2017, a MOAB was dropped on an ISIL cave complex in southern Afghanistan killing thirty six terrorists.

I usually pepper my stories with pop culture wit and personal anecdotes but I think I’ll leave it to Facebook, Twitter and late night comedians to crack jokes about the "Mother of all Bombs". Depending on whom you believe MOAB it is either, “the right weapon at the right time,” or, “an unethical use of power.”

I don't know. Perhaps it’s both.