The administration that promised to “Make America Great Again,” is stripping away your rights! Again!

“The secret of freedom lies in educating people, whereas the secret of tyranny is in keeping them ignorant.”  –Maximilien Robespierre

What is happening in America today does help us to understand the history of dictators, which is being repeated by those who have not learned from history and how it is that they get away with their crimes (Hosea 4:6). People somehow have in their minds that dictators will come forward attacking by force with two pointy ears, a long red tail and a pitch fork in his/her right hand.  Nothing could be further from the truth.

“And no marvel; for Satan himself is transformed into an angel of light. Therefore it is no great thing if his ministers also be transformed as the ministers of righteousness; whose end shall be according to their works.” -2 Corinthians 11:14-15

History also teaches us that dictators of the past and present were and are loved by the masses and, in the end, to their own destruction (Mussolini, Hitler, Stalin, Tung etc.).  They were also hated by those who knew the difference (Labeled by the dictators as the enemies of the state) who were attempting to awaken the masses (Ephesians 5:11).

Is anyone paying attention to the fact that what big tech companies are illegally doing through censorship today (A clear violation of the 1st Amendment of the Bill of Rights), is the same thing that red flag laws will do to gun owners if passed? It will aim at disarming any opposition that stands in the way of their global initiative.  Who is the greatest proponent of unconstitutional red flag laws?  Why, it's President Donald Trump, of course.  I thought what Americans were told is that they were under attack by everything anti-American?  They are, and President Donald Trump is behind these unconstitutional measures.  Although, you would think this would be coming from the likes of Kamala Harris or Joe Biden, and it is.

How does this work? The mainstream media reports:

“When Joe Biden (Sold to you as the bad guy) was questioned about a Biden administration coming from American guns, Biden says, 'bingo!'”

I have noticed that in every given scenario that this is how these agendas have gone forward with Donald Trump's administration.

Just today, and adding insult to injury, it was reported that President Donald Trump is now requesting reauthorization of NSA mass surveillance.

“The White House is calling for the reauthorization of a program that security agencies have used to spy on innocent people, violate their privacy, and chill free speech,” said Sandra Fulton. All of this while the American people are subject to an invasion of illegal’s spilling over into the American borders and are illegally searched in airports" (Violation of the 4th Amendment-Bill of Rights).

Is this how you make America great again? Advocating war with a just and Holy God (Exodus 15:13) in advancing a Hell on earth (Psalm 9:17)?

Again, this is all coming from the one that declares that he is making America great again.  I wonder what he says to those that he hates? Maybe this explains why he has not fulfilled his promises by indicting political criminals within the swamp that he promised to drain (John 8:44).

If the communists, as you are taught to believe, are the treasonous enemies of this country, and they are, then what does this make Donald Trump and his administration?

I almost hate to say it but if Donald Trump's enemies would open their eyes (2 Corinthians 4:4), they would be praising and worshipping him the same way that those that claim to have their eyes open (Mark 8:18), namely the professed Christian-conservative-right, do.  Hypocrites (1 John 2:4)!

Yet, if you are paying attention, it is the very fruit on the branches of Donald Trump's administration (Matthew 7:16).  Like that of the mainstream media’s propaganda spin doctors and actors, they rely on your absolute ignorance to further wield more control over the ignorant populace on a daily basis.

I can hear someone say, "This sounds like a broken record, Bradlee!"  However, what sounds like a broken record is the talking points which are being played out in real-time by a bunch of hypocrites (Matthew 23:3) who have been told the truth of the matter that they refuse to acknowledge (John 8:24), and yet, all the while, knowingly and continuously playing into the hands of those who are destroying their country.

How do you show mercy to people like that? You cannot (Jonah 2:4)! 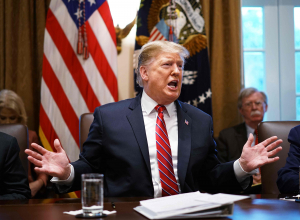 President Trump has signed a spending bill to avert another government shutdown. House Democrats agreed to some provisional border security money (to build 55 miles of new fencing) but did not fund The Wall the President wanted.

Anyway, the President signed the bill, passed by both House and Senate and that, as they say - is that.

Only … the President didn’t get his wall. Which is a problem for him and so, Friday afternoon, he declared the border a “national emergency” and will fund the wall via executive privilege. It doesn't seem to matter that, via any legitimate newsite and paper, you will find evidence to suggest that undocumented immigrants commit crimes at lower rates than native-born Americans (which Trumps own administration admits).

It also doesn’t matter that border security personal, custom personal and leadership involved with both groups want “more technology and additional personnel.” That’s it. That’s what they want. Notice how there was no mention of a wall.

But that’s okay. Because this is a known phenomenon called, “Security Theater.”  Security Theater is very specifically designed to create the illusion of offering security, even though everyone involved knows Security Theater does not actually make anything safer, it just makes the average person feel safer. And as long as folks feel safer, they come out and spend money.

The above linked Security Theater video is all about the TSA and how ineffective it is, but the same general principles apply to the border wall. A wall will not actually make the country safer, it will; however, make you feel safer. The border wall is the exact definition of Security Theater.

And by the way, wasn’t Mexico supposed to pay for it?

The Great Wall of Trump: A timeline of “who is paying.”

Jan 2017: Donald Trump takes over office of the Presidency. The Wall does not seem to be any kind of priority.

Even later Jan 2017: Mexico says it is NOT paying for wall

Even later than that, Jan 2017: Trump says Mexico is paying.

Even later March: U.S. is paying but it "won't be that expensive."

July 2017: Wall is no longer a solar powered wall that will pay for itself. Wall is now a “steel wall with openings” allowing border security to see when “drug dealers throw drugs over the wall.” Wall price skyrockets. U.S. is paying.

March 2018: Wall is concrete (again) with no openings. Wall price skyrockets. U.S. is still paying but again, wall doesn’t seem to be a priority.

Nov 2018: Two days before the election, Trump warns if you don’t vote Republican the U.S. will be overrun with Mexican invaders.

Dec 2018: Wall is now a “steel slat barrier.” U.S. - still paying. It’s now a priority. Many begin to report that Russian steel will be involved in building the wall. Russian steel belonging to a Trump/Kushner family friend.

Later Dec: Wall is mostly concrete (again) with some steel areas that will have openings. It’s a priority.

Later Jan 2019: The wall is coming! (Trump tweets.) US - still paying. Wall price skyrockets. It might even be a national emergency! Will probably use Russian steel.

Feb 2019: Trump declares National Emergency to fund Wall. U.S. taxpayers will pay for it all. It might be concrete, it might use Russian steel. Maybe both. 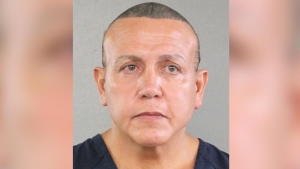 The packages all looked exactly the same. Manila envelopes all with multiple misspellings and the same return address: Debbie Wasserman “Shultz” (also misspelled) the former chairwoman of the Democratic National Committee. A few of them even had “postage due” stamps on them suggesting the package went through the entire mail system before being discovered as “suspicious.”

The folks over at CNN actually opened the package, not knowing what it was and uncovered the bomb. They partially evacuated the building and the bomb squad came and ended up destroying the pipe package bomb (which is standard procedure).

It should be noted that none of the bombs exploded. Which means they may or may not have been working bombs. Which is mind numbingly stupid. I mean, don’t get me wrong - I’m not suggesting to send working bombs through the mail. I’m suggesting that the culprit put together fake bombs to scare and / or make a political point and now, that he’s caught, will be prosecuted as if he sent real bombs.

What a moron. (Editor's note: The FBI now says the bombs were real. It's fortunate that, but unclear why - none of them exploded.)

I’ve already read the conspiracy sites too. They are up in lunatic arms. “False flag attack. Bummer Obama and Killery Clinton are behind it all!” They claim. *sigh*

I don’t need a conspiracy to answer this basic question, “Do you think someone, in this day and age of hyper partisanship, is crazy enough to send pipe bombs to political figures he despises?”

Point being: There are lunatics everywhere. And some of them are violent. When you hear “lunatic man sends pipe bomb to prominent Democrats” your first thought should be, “Another fucking lunatic man terrorizing political figures” and not, “It’s probably a Killary / Obummer false flag plot to stifle conservative voices all told through the fake news narrative of the CIA controlled media.”

It’s probably just another lunatic man sending pipe bombs through the mail. That’s probably what it is. And I hope he goes to jail forever.