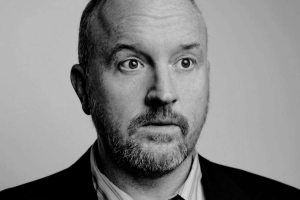 Multiple sources are reporting that Louis CK made a surprise appearance at the Comedy Cellar in New York City on Sunday night. You may or may not know that at the height of his career Louis CK was accused of sexual harassment by multiple women. He sidestepped and denied the allegations for many years, finally telling the NY Times in 2017 interview:

“I’m not going to answer to that stuff, because they’re rumors. If you actually participate in a rumor, you make it bigger and you make it real … (CK then was asked, “So they’re not real?”) …  They’re rumors, that’s all that is.”

Well, CK denied the “rumors” for years. Until too many women came forward and then he admitted that “These stories are true.” He was immediately fired from multiple shows, lost deals and had his recent film, “I Love You, Daddy” pulled from distribution. A film he wrote, directed, produced and starred in. The film also starred Chloe Grace Moretz and John Malkovich. The unreleased film is about an aging filmmaker (Malkovich) with an appalling sexual misconduct past and his new relationship with seventeen year old Moretz who happens to be Louis CK’s daughter. It’s unreleased but folks have still seen it. I mean, hell - I’ve seen it. And to be honest - it was okay. It’s even been nominated for awards! True story - the Alliance of Women Film Journalists gave it nominations and an award - winner of the Most Egregious Age Difference Between The Lead and The Love Interest Award and nominee for the Hall of Shame Award!

Anyway. You can imagine the shit storm of negative social media and press Louis CK was going to get when he made a walk on surprise appearance. Keep in mind that Louis CK often did walk on performance in the past to the sold out room (115) of the Comedy Cellar. It’s just that this was the first one since the allegations broke almost one year ago.

Apparently, audience reaction was fairly positive. His fellow comedians performing that evening said it was “classic Louis” and “quite good.” Cellar owner, Noam Dworman verified that he received one complaint email but also, several supportive emails. So, it sounds as if the walk on show - was fine.

But for the most part celebrity reactions have been uniformly disgusted. Comedian Kathy Griffin tweeted: “You know how many talented women and POC comics are knocking on doors trying to get some time in front of audiences or powerful people in this business? And Louis just gets to glide back in on his own terms? Gosh, does it payoff to be in the boys club..the white boys club.”

Top Chef host, Padma Lakshmi tweeted: “Not falling for this Louis CK "triumphant return" narrative after years of him humiliating women who worked for & with him.”

I would even go so far as to say the vast majority of coverage of Louis’s surprise set was negative. Very, very outraged and negative.

But Louis was not without his supporters. A few fellow (male) comedians voiced approval. Marlon Wayans said, “It’s nice to see Louis out of comedy jail.”  SNL actor and Emmy host Michael Che had a lot more to say.

He mocked the twitter outrage with, "'OMG! Can you believe that guy went on with his life?! (Yes, I can.)”

But Che’s main point was that the outrage was more about fame obsession gone wrong. Che wrote:

"What’s interesting to me about these articles against Louis CK performing again, is how important fame is to people. A lot of what I read says that CK shouldn’t get to be a ‘famous’ comedian anymore. Because to them, he’s still winning. Isn’t that strange? Meaning he can be shamed, humiliated, lose millions of dollars, lose all of his projects, lose the respect of a lot of his fans and peers, and whatever else that comes with what he did. But since he can still do a comedy set for free at a 200 seat club a year later, it means he got off easy. THAT’s how coveted fame is. Just because it looks to you like someone is 'getting off easy' cause they still have the perks you would kill to have, doesn’t make it so."

Okay. Maybe. Those are some fair points that I hadn’t considered.

I would push back though, that Che doesn’t seem to mention the shame, humiliation, loss of $$$ and loss of projects that all of the women suffered due to CK’s actions, the subsequent cover up and the strong arm harassment tactics to get the women to just shut up. A lot of them left comedy because of it. How are we to value their loss of $$$ and loss of careers. How do we offer them their “comeback?” Is that even a thing? Are you allowed a comeback for something you dropped ten years ago due to harassment against you? I mean, you might not even be good at it any longer - because you haven’t done it in ten years! So, what should we allow your “come back” to be? A check? How much should it be worth? Should it be based on the overall value of what you lost? How do we calculate that? Is your only “payment” from this ordeal that Louis CK no longer gets to work in comedy? Is that fair for all parties involved?

I mean, you can be cynical and say that had the women not been subjected to sexual misconduct and harassment - maybe they still wouldn’t have had “what it takes” to become a famous comedian. Okay. Well, what if some of them did have “what it takes.” Maybe one of them had the potential to become the next Tiffany Haddish (only the greatest female comic working today!).

Oh, man. That hurts my soul a bit. To think that a comedy powerhouse like Tiffany Haddish could have been lost to us because of sexual misconduct and harassment. That could have happened. And maybe it did.

Look, maybe Louis just “tried it out” to see what the reaction would be. And now that he sees the overwhelming negative praise, he won’t try it again. Or at least not for a long time.

Maybe he’s working out new material and planning a big come back and doesn’t care if social media is angry. We have no idea what Louis CK is thinking or if he has done anything (or nothing) to right some of his wrongs.

But something tells me - we’re about to find out.