My First Love, Basketball, Has Returned 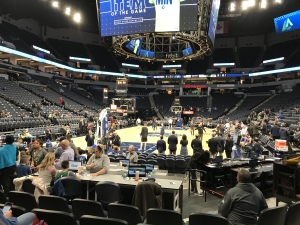 I’ve only just realized that I’ve never been a fan of any National Basketball Association (NBA) team, but simply a fan of fun basketball. The Minnesota Timberwolves helped me realize this by playing the least fun basketball I’ve ever seen on Friday night, while the Milwaukee Bucks repeatedly made me smile and laugh. My first love, basketball, has returned.

I gave up professional basketball for a long time after Michael Jordan retired a second time in 1999, but I never stopped watching Duke University men’s basketball. I’ve been a fan of Duke University men’s basketball for as long as I can remember. And I wasn’t a bandwagon fan like I was with the Minnesota Twins, with whom I took an interest because of a chubby, gleeful center fielder who carried his team to a World Series Championship in 1991.

Even though the Duke Blue Devils won it all in 1991 and got there on the back of Christian Leattner’s “Shot Heard Round the World,” I attribute by Duke fandom to my aunt’s indoctrination of me. She was a campus dispatcher at the University of North Carolina in Chapel Hill and hated it, so she sent me a postcard featuring an overhead look of the Duke University campus surrounded by the Duke Forest. I think I checked their academic standards and immediately wanted to attend after high school, but when I first witnessed the energy at Cameron Indoor on television, I was hooked.

I was a nerd who was always a better coach than player, so I appreciated the idea of smart kids beating the talented kids with schemes and heart. I was bringing up the rear in the top 10 percent of my high school class of 88 graduates, so I’m relatively smart given where I grew up. My best friends were the two smartest kids in the state. But when I watched the 1991-92 Blue Devils, it felt like I was meant to go there. I didn’t have a very good concept of my family’s fiscal situation, however.

So while I relentlessly rooted for the Chicago Bulls of the ’90s, it was because they were so fun to watch. They played my kind of basketball—above the rim and in the paint on offense, and physical on defense. That’s why I came back to the NBA in 2009, when Derrick Rose arrived on the scene as Rookie of the Year, then All-Star, then youngest MVP ever. But I didn’t come back because of Rose; I came back because the Bulls were holding teams to under 90 points with physical defense.

I had already put down a $250 deposit to retain my season ticket package with the Timberwolves, but it wasn’t difficult to find 10 games I wanted to watch. In the NBA, there are enough athletic freaks to go around that aren’t playing for the Timberwolves and would be worth seeing. Giannis Antetokounmpo is one. Antetokounmpo alone, scoring just 15 points, made the $80 I paid to sit a little lower than I sat when Jordan played his last game in Target Center worth every penny. That and seeing Sterling Brown get into the game and score some points. His jersey was the first NBA jersey I ever bought, not for his play on the court, but because of the way he handled himself when questioned and then tased by Milwaukee police for parking in handicapped spaces. Despite a vast Milwaukee crowd, I was the only one in the building proudly sporting Brown’s jersey.

LeBron James is obviously another one of those athletic freaks worth seeing regardless of your team’s ability, and the Los Angeles Lakers visit Target Center twice this season. Kevin Durant and Stephen Curry are another two. Anthony Davis another. Joel Embiid is another. James Harden another. Kawhi Leonard. Kyrie Irving and his coach Brad Stevens make the list. Speaking of coaches worth paying to see scheme, Gregg Popovich is one. And with all the hoopla over Jimmy Butler’s trade request, the Timberwolves’ home opener against the lowly, LeBron-less Cavaliers was must-see. That’s 10 games worth watching regardless of whether Jimmy Butler or anyone else plays for the Timberwolves.

Now I’m even planning a basketball/ski trip to Utah during the first round of the NBA Playoffs. I don’t expect the Timberwolves to be playing Utah, and couldn’t care less who does. I like Utah’s game. They play pretty good defense. I also like the Lakers’ game. They score all the points they can in the paint and as fast as they can to make up for their collective inability to shoot the three. It’s exactly what the Timberwolves should be doing, but Tom Thibodeau’s in the way. I won’t let it stop me from enjoying my newfound love of fun basketball, and I don't even like the evolution of the game via the exploitation of the three-point line.