The plot surrounding Russia’s effect on the 2016 Presidential election is thick as mud, and Donald Trump looks more guilty everyday. Michael Flynn allegedly intends to testify that then President-elect Trump ordered him to contact the Russians. Trump’s son-in-law Jared Kushner has been revealed as the transition-team official who ordered Flynn to contact Russian officials shortly after the election. Facebook has verified that ads purchased by fake accounts owned by Russians had an effect on the 2016 Presidential election.

This isn’t necessarily a bad thing for Republicans. In fact, getting rid of Trump sooner rather than later could save the jobs of many House and Senate Republicans. Here are five reasons why Republicans should want Trump impeached.

1. It would lift Republicans in the 2018 midterm elections

Trump’s record-low approval rating as President this far into his Presidency is falling to even more embarrassing depths, and that approval rating has a considerable effect on the results of the midterm elections. “Since 1934, the party of a newly elected president has suffered an average loss of 23 seats in the House in the following midterm,” according to Ballotpedia. But we’ve never had a President with an approval rating of 35 percent this early in his Presidency.

Democrats need to pick up 24 seats in the 2018 midterm elections for a majority in the House of Representatives. Ballotpedia classifies the reelection chances of 17 incumbent Republicans as battleground races and another 12 as “races to watch.” Just six incumbent Democrats are at risk of losing their seats, and another two are classified as races to watch. 270ToWin predicts 20 tossups in the House and doesn’t see the Democrats gaining a majority in 2018. But if the 2017 Virginia special elections are any indication, Republicans should be worried.

There are eight Republican Senators up for reelection in 2018, two of whom Ballotpedia predicts could lose their seats. The seat vacated by Jeff Flake in Arizona and Dean Heller’s seat in Nevada are two seats the Democrats need to swing the Senate majority in their favor. 270ToWin has 11 tossups predicted for the 2018 midterm elections, so there are plenty of seats to be had by Democrats, and that outcome becomes more and more likely as Trump’s approval rating falls.

2. It would give Republicans a chance in the 2020 Presidential election

Republicans would be better off with Mike Pence as their Presidential candidate. Right now, PredictIt shares of Trump losing the election are selling at 64 cents, so despite his shares of winning the 2020 Presidential election leading the pack at 37 cents, the market doesn’t have a lot of faith in him. Shares of Bernie Sanders and Elizabeth Warren winning the 2020 Presidential election are both trending up, as Trump’s shares go unchanged. Shares of Mike Pence winning are steady at seven cents.

Pence is ideal for Republicans because the Koch brothers prefer him. The possibility of a Pence Presidency would likely result in more spending by the Kochs on Republicans’ behalf, perhaps preserving Republicans’ Congressional majority.

3. It would give Republicans a reason to make abortion and gay marriage election issues, again

Republicans would love to make abortion and gay marriage election issues again and forever, and President Pence would make ending both his campaign promises. Trump doesn’t seem to be as interested in social issues. What he doesn’t understand is that as long as Republicans are talking about why Planned Parenthood should be defunded for all the wrong reasons and abortion should be illegal for even victims of rape, they’re not defending their tax scam that turns churches into the next big, dark-money donors to Republican campaigns or defending their belief that climate change is a hoax and not man-made.

Republicans love talking about abortion and gay marriage because they don’t need evidence of any kind to defend their position. Thanks to The Bible, they’ll be correct in their minds -- not unlike the illogicality of jihadist suicide bombers.

4. It would give Republicans a chance to “drain the swamp,” again

The revolving door that has been the Trump Administration would finally stop revolving after Republicans kick Trump’s appointments through it. Republicans would love to get back to an administration that does as little as possible as quietly as possible, but replacing Trump officials would give Republicans an opportunity to draw the eyes of the media and public away from things like their support of a alleged pedophile from Alabama for the United States Senate. If there’s something Republicans have learned from the Trump Administration, it’s that constantly moving parts allows for mass misdirection of the media and public.

5. It would give Republicans a chance to rebuild relationships with foreign leaders

It only took a Tweet for Trump to wear out his welcome in Great Britain, a country whose recent nationalist and immigration-stifling interests he wants to copy. Kim Jong-un has never been more willing or more prepared to start nuclear war. Virtually every nation disagrees with Trump’s position on climate change, but that’s not going to change with Trump impeached. Pence’s personality would likely repair relationships with Great Britain and Jong-un, though, to the extent the latter exists.

So there are five reason why Republicans should want Trump impeached. The first -- the 2018 midterm elections -- should be enough to convince at least a few Republicans to vote for impeachment. 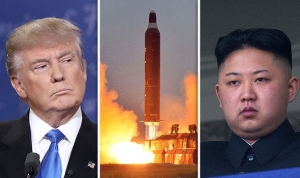