Timberwolves' Thibodeau Really Did Get the Best Deal for Jimmy Butler 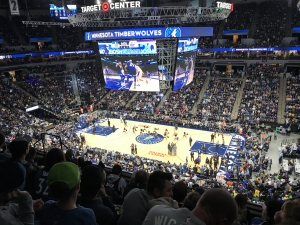 Back in April I called for Minnesota Timberwolves head coach and president of basketball operations Tom Thibodeau to step down as head coach--but not necessarily as president. The Jimmy Butler trade provides additional evidence of his ability as a team-builder, and his inbounds “plays” provide additional evidence of his inability to coach offense.

Thibodeau Spits in the Face of Evolution, Again

Good coaches get their guys good looks on inbounds plays and before the end of quarters. Thibs doesn't; he is not a schemer. That's why he needed Teague instead of Rubio. He wouldn't know what to do on offense without players who can create their own shots. He did build a playoff team playing mostly isolation offense with very little ball movement, though. It’s the second time he’s spit in the face of evolution and managed to hold his own in the ensuing fight. The first time was when he dared to win with defense as teams made it more difficult to defend by spreading the floor and exploiting the three-point shot.

The Timberwolves still aren’t moving the ball. They were 23rd in passes made and received last season and are 23rd again this season. They aren’t playing particularly faster either. The Timberwolves had the second-slowest pace on offense last year and are third-slowest this season. So they’re still not moving the ball or running the floor, which means they have to be shooting more threes, right? That they are.

Thibodeau knew coming into the season what his team needed to improve. Minnesota needed three-point shooting. The Timberwolves were dead last in three-pointers attempted (22.5) and made (8) last season because their best three-point shooter happened to be their center, and the only other player connecting on more than 40 percent of his threes attempted less than three per game.

Thibs addressed the three-point shooting by adding Anthony Tolliver instead of retaining Nemanja Bjelica. Bjelica is hitting more than half of his threes this season while Tolliver plays less and less, but given the lack of payroll flexibility, there wasn’t much more Thibs could do. And no one was up in arms over this deal. Bjelica was about to move back home and play in Serbia before Sacramento came calling.

Despite Bjelica finding his stroke in Sacramento, this season the Wolves are 21st in three-pointers attempted and 16th in three pointers made, which is directly related to the trade of Jimmy Butler and wouldn’t be possible had Thibodeau taken any of the other rumored offers from Miami or Houston. Only the 76ers had what the Timberwolves needed to win now, and Thibodeau managed to get it.

Last season Minnesota didn’t have one player average more than two made threes per game. This year they have one averaging three made threes per game, and it happens to be 2017-18 All-Defensive First Team honoree, Robert Covington. Covington is the very reason why I didn’t get bent out of shape like this guy when I heard of the Butler trade.

Covington’s under contract for this season and three more at a reasonable rate (just under $12 million annually on average). And not only is he an All-Defensive First-Teamer with length who can defend both guards and forwards and force turnovers. He takes a ton of threes and hits about 39 percent of them. He’s exactly what the Wolves lacked with Butler (three-point shooting) while providing Butler-like defense but with more length. And Minnesota got the bench version of Covington in Dario Saric, too.

Saric can’t defend guards for long, but he can assist Towns in the paint on forwards and centers. He too hit on 39 percent of his three-point attempts last season, but has struggled from long range thus far this season. Still, he provides additional length and depth Minnesota needed to alter shots.

Thibodeau Really Did Get the Best Deal for Butler

On the offensive end, Butler isn’t much help beyond the arc, and wasn’t expected to be when he was acquired from Chicago with Justin Patton for Zach LaVine, Lauri Markkanen, and Kris Dunn. It’s only fitting that Patton, who’s played four minutes in the NBA due to foot injuries, was shipped out to Philadelphia along with Butler to start anew.

So LaVine, Markkanen, and Dunn basically became Covington, Saric, and a future second-round pick. More importantly, the Timberwolves rid themselves of a cancer that cost them games early in the season. Butler missed all but one practice of the preseason before posting an effective field goal percentage (EFG%) of 41.3 in Minnesota’s season opener at San Antonio. Butler’s EFG% was 51.2 in 2017-18. The Wolves lost by four. Butler then sat out a four-point loss at Dallas that saw 276 combined points scored in the second game of a back-to-back for Minnesota. Butler’s defense was missed as the tired legs of Karl-Anthony Towns played more than 33 minutes a day after playing more than 34.

Butler was meant to be a sort of security blanket for Towns. His ability to stick with just about anyone on the perimeter meant fewer drives into the paint that forced Towns to move his slow feet and close out on the ball handler. In those situations, Towns is always going to be in a pickle because of his footspeed. If he commits to the ball handler early to make up for his lack of quickness, then his man is wide open under the rim, leaving little chance help could come to close the passing lane. If he commits too late, he doesn’t block or alter the shot. But that was before the long arms of Covington and Saric were swiping at ball handlers driving the lane. Fewer drives are actually getting to Towns, allowing him to avoid that lose-lose decision he has to time and defend perfectly to win. Covington alone is averaging three steals per game to go with his almost three threes made per game.

The deal Thibodeau swung with Philly isn’t just the deal he wanted most, but the deal the Timberwolves needed most. He got an upgrade on defense given the remaining roster, which is incredible considering Butler’s defensive prowess, but he also added three-point shooting to a team that needed it most. He got another three-and-D guy in Saric at an even more affordable rate than Covington’s (owed roughly $6 million over the next two years), and a draft pick to boot.

The team chemistry has also visibly improved. Covington is a natural leader, but a soft-spoken one who might connect better with the similarly silent assassins Towns and Andrew Wiggins. Most importantly, Thibs is playing the game his way again (offensive schemes optional). Since Butler was traded to Philadelphia, the Timberwolves have the NBA’s best defensive rating, climbing over Dallas by holding San Antonio to 89 points and tying their third-best margin of victory in franchise history with a 39-point win. The 76ers are 25th in defensive rating.

In short, Robert Covington is the most perfect replacement Thibodeau could possibly find for Butler, both on the court and in the locker room. Thibodeau really did get the best deal for Butler, but I’m still not convinced he should be coaching offense. We’ll let him live until the Trade Deadline, though. It’s the Minnesota nice thing to do.