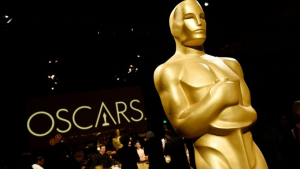 Surprisingly, Joker leads the nominations for the 92nd Academy Awards. A total of 11 nominations were piled onto the contentious film about the Clown Prince of Crime, which is more than any other movie. I mean, I like the film but … probably not 11 nominations liked. You know? Anyway,  eight other movies were selected to compete for Best Picture including - 1917, Ford v Ferrari, Jojo Rabbit, Little Women, The Irishman, Marriage Story, Once Upon a Time … in Hollywood and Parasite. Three of those films, The Irishman, 1917 and Once Upon a Time … in Hollywood, received 10 nominations.

I’ve seen all the Best Picture nominees except for 1917 (but I’ll get to it, eventually) and my personal taste leans towards Little Women, a movie that I think is simply fantastic from beginning to end, but I suspect the night will belong to either Scorsese or Tarantino. Probably, Tarantino.

As many pointed out there is a surprising (or maybe not) lack of women and people of color in the nominations. The two most glaring omissions are the lack of a Best Director nod for Greta Gerwig’s (Little Women) and the no nomination for Lupita Nyong'o for her devastating turn in Us. But, as I often say - the Academy didn’t bother asking my opinion.

Last year the Oscar awards went hostless and the entire show was automated. At the time, people freaked out that the show was going to be a disaster. It wasn’t. And so this year the Oscars will once again go hostless. Which is fine.

I have  yet to see all the major movies for several of the acting categories so I will refrain from offering further opinion. But I’m sure I’ll get around to that eventually.  Until then, the 92nd Academy Awards Ceremony will air on ABC on Sunday, February 9th.

"Once Upon a Time...in Hollywood"

ACTRESS IN A SUPPORTING ROLE

ACTOR IN A SUPPORTING ROLE

Tom Hanks, "A Beautiful Day in the Neighborhood"

Brad Pitt, "Once Upon a Time...in Hollywood"

"Learning to Skateboard in a Warzone (If You're a Girl)"

"The Edge of Democracy"

"I'm Standing With You," "Breakthrough"

"Into the Unknown," "Frozen II"

"How to Train Your Dragon: The Hidden World"

ACTOR IN A LEADING ROLE

Leonardo DiCaprio, "Once Upon a Time...in Hollywood"

ACTRESS IN A LEADING ROLE

Quentin Tarantino, "Once Upon a Time in Hollywood"

"Star Wars: The Rise of Skywalker"

"Star Wars: The Rise of Skywalker"