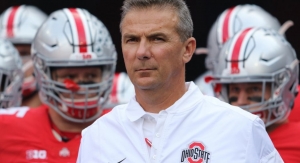 All rise. The sports court of public opinion we call Foul Play-by-Play is now in session, providing play-by-play and color commentary on foul play in sports on and off the field, pitch, court, and ice.

Ohio State football coach Urban Meyer was placed on administrative leave after former ESPN journalist Brett McMurphy obtained text messages and an exclusive interview showing Meyer knew in 2015 of domestic abuse allegations against his assistant coach, Zach Smith, yet retained him anyway. The university has formed what it called a “special, independent board working group” to investigate the allegations.

Meyer said had he known of the allegations, he would have fired Smith in 2015 instead of last week after the alleged domestic violence was first reported. But Meyer and Smith go way back. Smith was Meyer’s longest-serving assistant and even played for Meyer at Bowling Green before interning for Meyer at Florida, where the first domestic violence accusations surfaced.

According to McMurphy, Smith first physically abused his wife, Courtney, on June 21, 2009 in Gainesville, Florida when she was eight to 10 weeks pregnant. Meyer and his wife threw a party celebrating Florida’s second championship in three seasons. After the party, Courtney said she went home while her husband went out with friends.

Courtney said Zach returned home drunk around 3 a.m. with Meyer’s secretary at the time, whom Zach called “baby” and pleaded with Courtney to allow her to spend the night with them after reportedly breaking up with her boyfriend. Courtney refused and drove the woman home, but upon returning, a heated argument turned violent, with Zach allegedly throwing his wife against their bedroom wall. That was the Smiths’ one-year wedding anniversary.

Zach was arrested for aggravated battery on a pregnant victim, and Meyer said at Big Ten Media Days that he and his wife advised the Smiths to try counseling. A few days after the arrest, Courtney said two of Meyer’s closest friends asked her to drop the charges against her husband, and ultimately pressured her to do so. She did, thinking it would never happen again, which seems to be a common mistake of domestic abuse victims.

Courtney said she left her husband on June 6, 2015, but the abuse didn’t stop until Courtney was granted a restraining order against Zach on Nov. 10, 2015. She filed for divorce two days later. Cleveland.com reports that Powell (Ohio) police visited the Smiths’ home nine times in response to domestic disputes between January 1, 2012 and July 26, 2018.

Courtney spoke frequently with Meyer’s wife, Shelley, a nurse, about her abusive relationship, yet Meyer claimed ignorance of any abuse occurring after the 2009 incident.

Meyer, of course, is not unfamiliar with allegations of foul play brought against his football programs. During his time at Florida, Gator football players amassed 251 traffic citations, his best defensive player was suspended for a DUI prior to the SEC Championship game, and freshman foul player Aaron Hernandez suckerpunched an employee of a Gainesville bar, rupturing his eardrum. Hernandez also went unquestioned by police or his coach despite being a suspect in a 2007 shooting that left two men injured, with one shot in the back of the head. That attempted homicide remains unsolved.

Meyer mostly avoided being muddied by his Gators’ allegations, not because he won, but because he had the good guy on his side. Not God, but a God-fearing quarterback so squeaky clean and contagiously charismatic he stole the spotlight, allowing his teammates to remain in the shadows. Tim Tebow was Urban Meyer’s guardian angel. Tebow protected Meyer as he did the football. Meyer no longer has that protection and the mud is being flung.

Meyer’s battle for his job will be fought on two fronts. While an investigation determines his knowledge of his assistant coach’s alleged transgressions, he’ll also have to address allegations of verbal and physical abuse brought by former Florida players. If his ignorance of his assistant coach’s domestic abuse history since the incident in 2009 is confirmed or unconfirmable, Meyer could still lose his job if any of the players’ stories are substantiated.

If the Bryan Colangelo Twitter scandal is any indication, Meyer’s wife can’t necessarily save her husband’s job by saying she never told him about Courtney’s claims. Colangelo’s wife took all the blame and her husband was still forced to resign. I imagine that’s what’s coming for Meyer, too, especially with the players painting him as abusive just like Smith. What are your thoughts?

Jordan is seeking to succeed retiring Speaker of the House Paul Ryan if Republicans retain a majority in the House after the midterm elections. But he won’t do it with help from the two OSU wrestlers Hellickson contacted. They came forward earlier this year alleging former team doctor Richard Strauss committed sexual abuse and harassment, saying Jordan knew about it and failed to act when serving as assistant coach between 1986 and 1994.

More than 100 former students have told independent investigators that they were victims of Strauss, who took his own life in 2005. While Strauss won’t serve the time for his alleged crimes, Jordan could face similar charges as former Penn State officials Gary Schultz, Graham Spanier and Tim Curley, who were sentenced to at least two months in jail for failing to alert authorities of Jerry Sandusky’s molestation of young boys in 2001. Judging by the number of alleged victims in this case, however, it would stand to reason Jordan would be subject to an even harsher sentence if charged and convicted.

UFC’s biggest star, Conor McGregor, avoided jail time by pleading guilty to a single count of disorderly conduct in an agreement reached with the Brooklyn District Attorney’s Office on Thursday, according to Brett Okamoto of ESPN. The charge stems from an incident occurring April 5th at Barclay’s Center, during which McGregor was caught on video throwing a metal dolly and breaking the window of a bus carrying UFC athletes and employees..

McGregor will serve no jail time, have no criminal record and his travel visa will be unaffected despite facing 12 criminal charges related to the incident, including two felony criminal mischief charges and three assault charges. Those charges carried a maximum sentence of seven years in prison, but instead McGregor could return to the octagon by the end of the year having paid restitution for damages, serving five days of community service and completing an anger management program lasting one to three days.

A potential lightweight title fight between McGregor (21-3) and current champion Khabib Nurmagomedov (26-0) could arguably be the biggest fight in UFC history. Nurmagomedov was the target of McGregor’s actions in April.

McGregor, 30, obviously got a good plea deal. Most people wouldn’t get 12 charges dropped down to one misdemeanor in exchange for paying restitution, serving five days of community service and doing a joke’s-worth of anger management therapy considering McGregor’s clear anger issues.

While Urban Meyer might be on his way out, former Baylor football coach Art Briles is on his way back into coaching. He took a job coaching an American football team in a 12-team league in Italy playing by NCAA rules. Briles is just two years removed from being removed as head coach at Baylor amidst the sexual assault scandal involving multiple football players committing crimes university officials failed to act upon after they were alleged.

If Briles is any indication of what we can expect, Urban Meyer might be coaching in the NFL next year. With crimes as egregious as those committed by players Briles recruited have him coaching again when two years ago most thought he ever would, Meyer claiming ignorance of his co-worker’s spousal abuse might not be a problem for, say, the nearby Browns.

The Iowa Hawkeyes will be without two of its starters for the first game of the season against Northern Illinois on Sept. 1 due to alcohol-related citations. Defensive tackle Brady Reiff was arrested for public intoxication in Iowa City after mistaking a police cruiser for an Uber, and eight days later offensive tackle Tristan Wirfs was ticketed for driving while intoxicated. I haven’t spent much time in Iowa, but I imagine it’s not as heavenly as Field of Dreams advertises, and judging from the damage left by vandals taking a joy ride through the iconic field in January, there’s evidence indicating a lack of entertainment options besides drinking and driving.

Wheeled vandals have torn-up the turf at Iowa's iconic ballpark that served as the centerpiece for 1989's Field of Dreams. pic.twitter.com/vXWZa7V2ug

Terrance Williams, who allegedly crashed his Lamborghini into a light pole and then left the scene of the accident, had a public intoxication charge stemming from the incident dismissed according to his attorney. Williams somehow was never charged with leaving the scene of an accident, and the Class C misdemeanor is the equivalent of a speeding ticket requiring payment of a fine and completion of a state-mandated Alcohol Awareness Education course, which Williams has already done.

Not only did Williams avoid criminal charges, but his completion of the diversion course makes a suspension from the NFL unlikely, and even if he were to be suspended, it would likely come in 2019 and not this season. Does Jerry Jones just make a phone call to make this stuff go away or what?

It’s time for everyone’s favorite segment, where we award the most foul cheats in sports over the past week in what we call Cheats of the Week.

Winner of the Bronze Balls award this week isn’t even an athlete, unless you consider crime a sport, and it very well could be in certain circumstances. In this case, the crime required a team of players led by ex-cop Jerome Jacobson, who rigged the McDonald’s Monopoly game and won almost every prize for 12 years until the FBI launched an investigation and sting operation. The team of “mobsters, psychics, strip-club owners, convicts, drug traffickers, and even a family of Mormons” defrauded McDonald’s of more than $24 million in cash and prizes, according to Jeff Maysh of The Daily Beast.

The Silver Syringe goes to swimmer and boozing bad boy of the Rio Olympics, Ryan Lochte, who was again banned from competition by the U.S. Anti-Doping Agency until July of next year for receiving an intravenous injection of permitted substances in May. While the substances weren’t prohibited, athletes can’t receive IVs without an exemption or unless it’s a result of hospitalization. Neither was the case for Lochte, who incriminated himself by posting a photo to social media while receiving the IV, making him quite possibly the worst cheat we’ve mentioned on the show. Regardless of U.S. Anti-Doping rules, why would anyone feel the need to not only photograph but publicize their intravenous injection to the world?

Our two-bit cheat of the week is Italian cyclist Gianni Moscon, who was kicked out of the Tour de France after punching a French cyclist in the face during the first 800 meters of Stage 15 last Sunday. This isn’t the first time Moscon has been guilty of foul play, which brings us to our next segment, Historically Foul Play, when we go back in time and relive foul play and foul players of the past.

Last year, Moscon was suspended six weeks and required to complete diversity training after berating another cyclist with racist insults. Fresh off the suspension, Moscon was accused of deliberately causing Sebastien Reichenbach to crash, fracturing his elbow and hip. He was cleared of any wrongdoing due to a lack of evidence. And a couple months after that incidental accident, Moscon was disqualified from the UCI Road World Championships for being towed too far by the team car into a 29th-place finish after a crash with just under 24 miles to go.

I wish I would have known this Italian bad boy of cycling existed prior to this week. I might have tuned into the Tour de France to see this foul play tour de force culminate in a scene straight out of Road Rash, the video game.