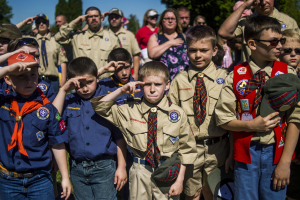 Earlier this week, news erupted about the Boy Scout’s “Perversion Files.” The Perversion Files (which the Scouts call, “ineligible volunteer files,”) detail as many as 12,000 boys that, while participating in scout programs - were sexually abused by Scout leaders.

Now, portions of the Perversion Files have leaked before, so the general information is nothing new. What has recently come forward is that the number of abused boys and abusers is much, much higher than previously reported.

The way I understand it is that the Boy Scouts of America (BSA) hired someone to do a five year internal investigation and that investigation concluded the number leaders who sexually assaulted boys in the program is not the 3,000 as had been previously reported, but is actually closer to 8000.

Let that sink in for a moment. That’s eight thousand men - volunteer leaders in the BSA, that have been accused of molesting more than 12,000 boys. So the “Ineligible Volunteer Files” is a detailed list of all the men who have “had their registration with the Boy Scouts revoked - because of reasonable allegations of child sex abuse.”

This all came to light when attorney Jeff Anderson released sworn testimony from Janet Warren, a psychiatry professor at the University of Virginia. Warren had been hired by the Boy Scouts to conduct the above mentioned study of the sex abuse files. Warren found that the evidence in the files was actually much worse than what the BSA imagined. She found the number of abused boys and abusers was thousands more than initially thought. Warren also made it clear that she found no evidence of a cover up by the BSA to hide this information and that she will present a more detailed report sometime during the summer.

Unlike the Catholic church, who just shuffles abusers around to new parishes and/or different cities - at least the Boy Scouts fired the abuser and didn’t allow them to work with youth ever again. I mean, it’s not much, but at least it’s that.

With something like two and a half million children participating in the Boy Scouts, if there are thousands of victims who come forward (and hundreds and hundreds of them are coming forward - some as young as 15, and one as old as 75) - this could be a financial disaster the BSA. As a non profit organization, they would not be able to financially handle thousands of lawsuits and would probably declare bankruptcy, which would shield them from lawsuits but allow them to continue operations.

Michael Surbaugh, the Chief Executive of the Boy Scouts said this at a lengthy press conference:

"I want to reiterate our steadfast support for victims of abuse. We are outraged that there have been times when individuals took advantage of our programs to abuse innocent children …  We care deeply about all victims of child abuse and sincerely apologize to anyone who was harmed during their time in scouting. We believe victims, and we pay for unlimited counseling by a provider of their choice, and we encourage them to come forward. At no time have we ever knowingly allowed a perpetrator to work with youth, and we mandate that all leaders, volunteers and staff members nationwide immediately report any abuse allegations to law enforcement. Throughout our history, we have enacted strong youth protection policies to prevent future abuse, including mandatory youth protection trainings and a formal leader-selection process that includes criminal background checks. Since the 1920's, we have maintained a Volunteer Screening Database to prevent individuals accused of abuse or inappropriate conduct from joining or re-entering our programs, a practice recommended in 2007 by the Centers for Disease Control for all youth-serving organizations."

Okay. Well, I do believe him. I doubt BSA leadership “knowingly allowed” predators to work with youth.  Again, the Perversion Files clearly state that abusers were fired after “reasonable evidence.” Which suggests that the BSA knew about the allegations, believed the victim and fired the alleged abuser. But, and here’s the sticky point - didn’t contact authorities. Which might have been a problem.

Interestingly enough, I just read that the Boy Scouts filed suit against several of their insurers for “refusing to cover its sex abuse legal liabilities.” But, like insurance companies everywhere, said insurance agents found a way not to pay a cent of coverage for the BSA by claiming, “the Boy Scouts neglected to take meaningful precautionary action.”

Hrmmm. Okay. Maybe. The Boy Scouts claim they have a screening process and a “protection system” in place. Which makes sense. Clearly, their process doesn’t work as well as they thought, but it certainly suggests they are “taking meaningful precautionary action,” so I don’t know what the F those insurance companies are talking about.  I even found a part of their screening process / protection system listed in a CNN story:

Sounds like meaningful precautionary action to me. Anyway, - the courts will work all that out. Until then, more and more victims continue to come forward.