Labor Day weekend news round up

I don’t know about you but I was hoping to have a relaxing weekend of BBQ, beer and games. Instead, Hurricane Dorian was upgraded to a Category 5 and absolutely devastated the Bahamas. Dorian is expected to remain Category 5 and hit parts of Florida and Georgia but meteorologists hope a wind shift will push the hurricane a bit East and the two coasts will avoid the worst of the storm.

Another mass shooting killing rampage happened, this time in West Texas. A 36 year old man was fired from his job and then, a few hours later started massacring citizens. At least 7 people were killed with another 20 wounded. It ended when police rammed the shooter’s vehicle and, as he tried to exit the stolen car, police shot him dead.

A 75 foot boat called the Conception caught fire off the coast of Southern California. At least five people have been rescued but the ship was entirely ablaze and it looks unlikely rescuers will find other survivors. Approx. 30 people, maybe more, were on board.

For thirteen weeks protestors in Hong Kong have been battle state authorities. That’s - thirteen weeks! Hong Kong is obviously a city in China but for more than a century it was a colony of the United Kingdom until 1997 when the British handed it back to China. The problem being is that Hong Kong still has a political and legal system based off British rule which is known as the Basic Law, and it guarantees freedoms that Chinse outside Hong Kong do not have. These include freedoms such as the right to a free press, free speech and the right to protest, etc.

Well, Beijing and the rest of China is pushing back against Basic Law and the citizens of Hong Kong are not having it. Hence the thirteen weeks of protests up to and including several violent clashes with police.

Finally, the Amazon rainforests continue to burn and comedian / actor Kevin Hart was seriously injured in a car accident.

Maybe next year I’ll be able to round up all sorts of heart warming stories that occurred Labor Day weekend but this year - not so much. 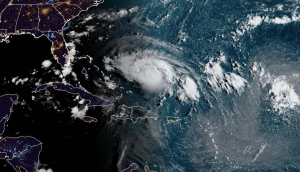 Hurricane Dorian has been upgraded to a Category 3 and expected to hit the Florida coast on Monday. Upon landfall it will probably pick up enough additional wind force to upgrade to a Category 4.

Florida is currently under a state of emergency and residents are preparing for the worst. These hurricanes keep coming and they seem to be more destructive and more costly. And why is that? Well, last year my co-worker wrote a strongly worded story titled “Hurricanes should blow climate deniers’ eyes, minds open.”  In it he writes:

This is a developing story and will continue to be updated.