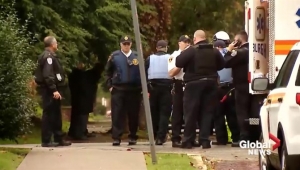 Another day, another lunatic. Many sources have reported multiple gunshot fatalities at the Tree of Life synagogue in Pittsburgh. At least 12 people were shot, eight appear to have been killed. Multiple officers were injured while exchanging fire with the shooter, who eventually surrendered.

The shooter, Robert Bowers, was an active poster on “alt-right” sites, especially, Gab. A site I’ve never even heard of. Anyway, his Gab profile was quickly disabled after he was named the shooter. But images captured from his profile before it was deleted show that a few days before the shooting Bowers wrote about the “kike” infestation, “the overwhelming Jew problem” and this about the Hebrew Immigrant Aid Society, “HIAS likes to bring invaders in that kill our people. I can’t sit by and watch my people get slaughtered. Screw your optics. I’m going in.” And then he picked up his AR-15 like rifle and attacked a Jewish synagogue during a baby naming ceremony.

So, it’s kind of looking like crippling insecure man baby Robert Bowers knew that children were going to be up on the third floor so he went up to massacre them. Thankfully, earlier that morning, all the children’s classes had been canceled (for some reason but presumably, for the baby naming ceremony). Bowers then shot up the synagogue killing several people - here are the names of the victims.

Michael Eisenberg, the immediate past president of the Tree of Life congregation, spoke with the Pittsburgh Post Gazette and told them that, at any typical Saturday morning there would be approx. 100 - 150 people from multiple congregations holding simultaneous services in the building.

Police believe he acted alone and that there is no further threat to the community and are treating this as a hate crime.