Opinion: Cohen's 3 year sentence and the Little "Witch Hunt" That Could! 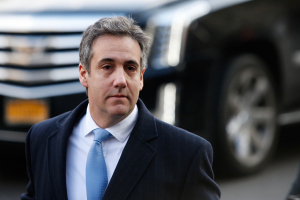 Michael Cohen, President Trump’s previous attorney, has been sentenced to 3 years in prison after pleading guilty to multiple allegations stemming from Robert Mueller’s investigation. Mueller, as we all know by now, is special prosecutor looking into Russian meddling in the 2016 Presidential election. President Trump isn’t too happy about the entire ordeal, claiming hundreds of times, that the investigation is a “witch hunt.”

Now, the term “witch hunt” amuses me. Especially, when applied to this particular investigation. The exact meaning of the phrase “witch hunt” comes from the Salem Witch Trials in Massachusetts between Feb 1692 and May 1693. Nineteen people, mostly women, were found guilty of “witchcraft” and executed by hanging. Obviously, none of them were witches - because witches don’t exist. But the religious lunatics in 1600 believed in them and hunted them, tortured them and murdered them. So in the 1600’s “witch hunt” we have to go hunt down some witches!

BUT NOW - hundreds of years later, we know that witches don’t exist. So the phrase “witch hunt” has evolved to mean that you are hunting for something that does not exist. So, when President Trump screams “witch hunt” all over Twitter, he is saying that there is no collusion evidence to be found, because he is innocent and that the entire Mueller investigation is hunting for something that does not exist. Hence, it’s a “witch hunt.”

Which would be a fine argument - if it was remotely true.

And that’s just the people that have pled guilty! We’re not even yet counting the dozens of people who have been charged but have not yet had their time in court and / or pled out (yet). We’re also not talking about the other hundred (or more) people that are still under investigation!

So, President Trump is factually inaccurate when he calls the Russian meddling conspiracy a “witch hunt” because there is clearly a huge amount of evidence to suggest conspiracy. Up to and including the folks that have already pled guilty to the conspiracy. AND - the investigation is not over (far from it)!

Mueller’s investigation is more like, ummm, how can I say it? Oh, I know! It’s more like an investigation into the fact that a hostile foreign government illegally interfered in the 2016 Presidential Election handing the election to Donald Trump and that the Trump family, the Trump campaign, Trump top aides, Trump top advisors and several other individuals all willing and knowingly went along with it and now are all lying to the FBI and trying to cover it up.

Which, is the exact definition of conspiracy.

Finally, I wasn’t a huge fan of Hillary Clinton but I voted for her, against Trump. I will say that Donald Trump sure was right about this one thing: He warned the American people, countless times on the campaign trail that if the people voted for Hillary they would end up with a President who was under federal indictment from day one.

Turns out - he was right! I voted for Hillary Clinton and I ended up with a President under federal indictment from day one!

But something about her emails, though. Right? *sigh*