Foul Play in Sports: Investigating a Possible Cheerleaders' Union and the Devotion of Bryan Colangelo's Wife 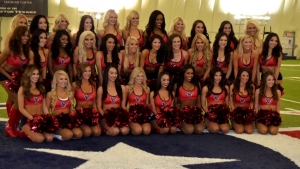 Each week at Foul Play-by-Play we cover the law-related, sports stories, including the Colangelo Twitter scandal, and we dive deeper into a possible cheerleaders' union with former union rep and sports-labor expert Al Neal of PeoplesWorld.org and GrandstandCentral.com. Here are your headlines, "Cheats of the Week," "Historically Foul Play" and "Statistically Significant Foul Player" for the week ending June 10.

An independent investigation found Colangelo to be the source of the sensitive information shared by his wife, Barbara Bottini. Colangelo said his wife was “operating without his consent” and that “at no point did I ever purposefully or directly share any sensitive, non-public, club-related information with her.” So how did she come across this information? You say you didn’t directly share sensitive information, so sas she getting it from someone else in the organization? You say you didn’t share it on purpose, so was it shared in the throes of passion?

Barbara taking the blame on this obviously doesn’t make Bryan innocent. She can’t be guilty without having an accomplice giving her the information. It’s a miracle, frankly, Bryan Colangelo wasn’t fired. The Sixers are either being incredibly nice or didn’t want to file the paperwork to fire the man because sharing trade information is a fireable offense.

I don’t see Colangelo working again, regardless of this being a resignation and not a firing. Even if he didn’t know about the Twitter accounts, he still shared sensitive information with someone he shouldn’t. When there’s a big trade on the table at work, you don’t go home at lunch and spill the beans to your wife before it’s final. You don’t spill the beans to anyone outside the organizations involved.

More than $322,000 was wagered on the first day of legal sports betting in Delaware, Tuesday. Delaware Governor John Carney made the first wager and won, risking $10 on the Philadelphia Phillies to beat the Chicago Cubs. The Phillies won 6-1. That must have paid well.

Delaware was already offering parlay betting during the federal ban since 2009 and built sportsbooks within its casinos, waiting for the end of the federal ban. It’s estimated that $350 million to $760 million could be wagered annually if online betting is fully implemented.

This isn’t the first time NFL cheerleaders have sued their employers. I wrote a column for the Livingston Enterprise about the Oakland Raiders’ cheerleaders who sued citing similar allegations back in 2014 or so, and spoke to their attorney who recommended NFL cheerleaders unionize. During my painstaking research of NFL cheerleaders, I found that each NFL team employs between 32 and 42 cheerleaders. With 32 NFL teams that brings the total number of cheerleaders employed by the NFL to just over 1,000, which isn’t enough to form a union with any real bargaining power, so this union will have to be formed of cheerleaders and dancers across all sports.

There are usually about 20 Laker Girls employed every season, but the Timberwolves have just 13 dancers. If each NBA team has about 15 dancers, that’s another 450 potential union members.

Most hockey teams employ “ice girls” to shovel the ice during breaks in the action, and many have expressed similar working conditions cited by NFL cheerleaders, according to a 2014 story by Mother Jones that actually resulted in the Flyers eliminating their ice girls and then bringing them back when the men who replaced them were quite literally booed off the ice.

The Vegas Golden Knights held auditions to fill 40 positions on its ice, cheer and gameday crews, however, so these jobs aren’t going anywhere. With another 30 teams employing at least another dozen entertainers, and I’ll get to why it’s 30 and not 31 in the Historically Foul Play segment, that’s 360 more potential union members, bringing the total to just over 1,800. If we include mascots in the union, there’s at least another 123 union members to get us closer to 2,000. But won’t there always be cheaper bodies to objectify regardless of whether a cheerleaders’ union is formed and regardless of how encompassing its membership is? I just don’t think the backlash from having less attractive or less entertaining cheerleaders would affect the NFL owners’ bottom line.

Colts defensive end Chris McCain was charged with battery stemming from an incident that occurred in January in Los Angeles, according to TMZ. McCain is accused of spitting on a woman and “forcefully grabbing her neck.” He’ll likely face a suspension.

Ottawa Senators assistant general manager Randy Lee is accused of inappropriately touching and making lewd comments toward a hotel shuttle driver while in Buffalo for the NHL's scouting combine. He was charged with second-degree harassment on Friday after being arrested and spending the night in jail. If Bryan Colangelo thought he had problems, at least he’s not Randy Lee. It has to be considerably more difficult to get a job as a sexual harasser than a trade-secrets sharing pillow-talker, right?

I promised I’d tell you why just 30 NHL teams employ “ice girls,” and here’s why. In December of 2007, the media’s and masses’ eyes were affixed to a New York Knicks scandal involving former coach Isiah Thomas, who was found by a jury to be guilty of sexual harassment. The plaintiff, a former Knicks’ executive, was awarded $11.5 million in damages, paid by the owners of Madison Square Garden. But that wasn’t the only foul play in the Garden at the time.

Three days after the Thomas verdict, a settlement between Madison Square Garden and a former captain of the New York Rangers’ cheerleader squad flew under the radar. (Court documents of lawsuit filed.) No details were released, but the accuser alleged that her supervisor, Ryan Halkatt, told her which skaters had to lose weight or “stuff their bras” to appear more alluring. That was the last year the Rangers had “ice girls.”

Sticking with hockey, the Washington Capitals won the Stanley Cup for the first time in franchise history. Their statistically significant foul player is, of course, Tom Wilson, who spent twice as much time in the penalty box as the next most penalized player on his team. His 187 penalty minutes during the regular season was just 25 off the pace set by Florida’s Micheal Haley this year. Haley’s 212 penalty minutes in a single season doesn’t even put him in the top 250 all-time. The NHL record for penalty minutes accessed in a season is 472 by Dave Schultz in the 1974-75 season. That’s more than five games spent in the penalty box.

Silver medalist: Free agent left-handed reliever Fernando Abad received an 80-game suspension after testing positive for Stanozolol. A lengthy appeals process will make this a short ban for Abad, as the suspension began upon the filing of the appeal. Any team who signs Abad knows he must sit out most of this month, but given the overuse of Ryan Pressly, Abad would be a great fit for the Minnesota Twins. Their splits work out well together, as Abad has been more effective against lefties in his career and Pressly righties, with neither being that bad in either situation. If you’re Paul Molitor, you have to like being able to bring in Abad when two of the next three batters are lefties and Pressly when two of the three are righties.

Gold medalist: Boston Red Sox fans used the flashlights on their phones to distract Detroit Tigers hitters, angering manager Ron Gardenhire, who we know runs hot. The foul play caused a short delay in the seventh inning as security asked fans in the center field sections of Fenway Park to stop using the lights on their cell phones to distract batters for obvious safety reasons. Red Sox manager Alex Cora called it “a good weapon,” which it very well could be if someone were to be hit in the face with a fastball because they’ve been blinded by a flashlight.