Alabama tornado aftermath, names of victims released (and how you can help) 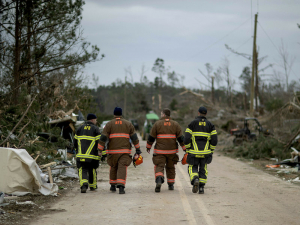 Two devastating tornadoes ripped through Alabama on Sunday night killing at least 23 people, injuring dozens more with at least ten people still missing. The Governor immediately declared a statewide emergency and by Monday afternoon FEMA had search and rescue teams in state in hopes of finding those still missing.

In fact, 18 tornadoes hit Alabama, Florida, Georgia and South Carolina over the weekend, it’s just that the Alabama two did the most damage, including one that blasted through Lee County and caused the most deaths. The storm hit several families tragically hard - seven from two families related by marriage were killed and at least three families had two or three people die in the storm. The names of the all the victims can be found here.

By Tuesday morning rescue operations turned into recovery operations and residents were told to push any debris on their property out to the edge of the roadway for eventual pickup. But if that’s not bad enough, the weekend might bring in more storms from the west.

According to CNN there are multiple ways you can help families affected by the storm - here is the official link to the Public Good campaign to help victims of Alabama tornadoes. Or you can donate to the Alabama Governor’s Emergency Relief Fund.